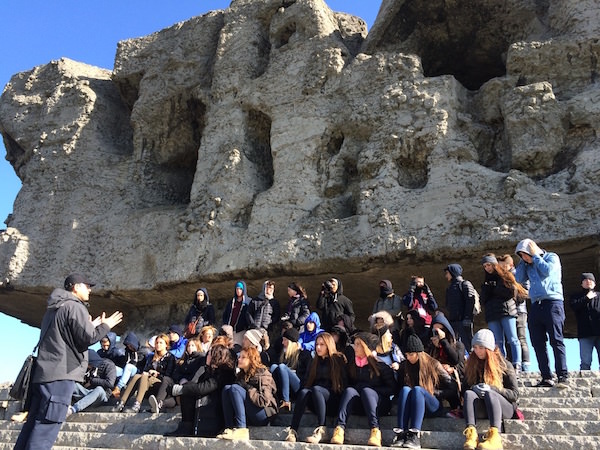 We arrived in Lublin after a 3 hour drive, the city which was known as the Jerusalem of Poland but is now reduced to nothing but memories. The first thing we did was go to the Chachmei Lublin Yeshiva which is the first Yeshiva that paid for the students who could not afford it. A place of G-d, learning and hope turned into a warehouse for the Nazis. We sat in the shul of the Yeshiva, the book of G-d looking at us as we learn about the history. We even had the amazing opportunity to learn the Daf Yomi which is the idea that if you study one page of a Talmud a day in 7.5 years you will have finished studying the Talmud. This idea was actually founded in the Yeshiva we were in. I constantly got chills sitting there – learning – just thinking of the hundreds of students that came through these doors to study and the hundreds of students that were led out of the doors to the Ghettos.

After the Yeshiva we drove to Majdanek. From a Yeshiva to a camp. From heaven to hell. From joy to pain. We arrived in the scene and as we were getting of the bus the overall mood changed to fear and curiosity. What would we see? What would we feel? We stopped right by the giant sculpture looming over us as we discussed the history of the camp. Then we started to walk. The sharp wind hitting us from every direction and the ice cold weather makes it impossible to believe that someone could of survived these conditions.

One of the barracks we went into was filled to the brim with shoes, shoes that were ripped of their owner and thrown into a random piles as if they held no history. But these shoes held a giant part of history, history of their owner. These shoes had owners who lived, laughed, loved and maybe even survived this cold place that imitated hell. We walked around a bit more and saw gas chambers that were once filled with people who were scared and weak against their oppressors, we saw the grass that was once walked upon by people who had death follow them yet they tried to keep it at bay as much as possible. The most horrifying thing about that day was the crematoriums. Literal ovens where corpses were shoved in, reducing that person to nothing but a pile of ash. No name and no history. Right next to the crematoriums was a bathtub, a bathtub. Used by the SS officer in charge of Majdanek, his logic was that the fires for the burning of the bodies was hot so he might as well use it for a warm bath. This barbaric man sat in warm water which was heated by the souls that were being burnt. This to me truly shows how soulless these men in uniform really were.

The next place we went was the giant building that kept the ash of the Jews in place before this was built the ash would fly around, and be scattered around yet the Nazis did not give less of a damn. Now it’s protected by a giant dome which to me symbolises that the we will protect the past present and future Jews even if they are now just a pile of ash.

Leaving this place that’s core value was to cause pain and death to the Jewish nation we traveled back to Warsaw to a synagogue that’s core value to maintain the Jewish faith and celebrate Judaism. This shul contained countless of Jews of all nationalities but with the same beliefs. This to me was one of the most beautiful Shabbats I have ever experienced, singing and dancing while the prays that we said lifted to the heavens and I hope showed the Jews that perished in the Shoah that we are praying for them and for it to never ever happen again.

– Written by Nicole Kochukov, March of the Living South Africa, 2017