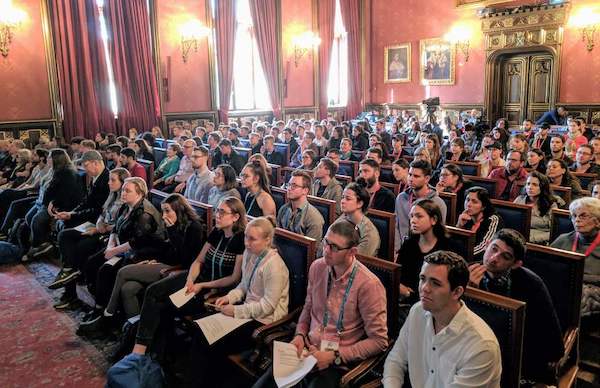 On Wednesday, May 1, the eve of Holocaust Memorial Day (Yom Hashoah), more than 200 young leaders from 10 countries – Jewish and non-Jewish – gathered at the Jageillonian University in Krakow, Poland, to take part in the first-ever ‘Emerging Leadership Conference,’ an initiative of the International March of the Living launched in response to the torrent of anti-Semitic events and growing global trend of hate crimes against Jews over the last two years. The conference included a wide-ranging discussion of the young leaders’ responsibilities as the new frontline in the war against anti-Semitism and centered on the development of a declaration launching a campaign to rally the support of their peers around the world.

Bringing together students and young professionals from the United States, Canada, Panama, South Africa, Australia, Brazil, Mexico, Argentina, and the UK, the conference was led by 20 youth delegates who experienced anti-Semitism firsthand on college campuses or in their personal lives.

“Our enemies are everywhere – in the universities, in the streets, and in the political arena. What happened here in Poland is happening in all other countries, and it is time to act,” said Alberto Levy, a Duke University graduate from Panama who began receiving death threats after a Twitter feud with an anti-Semite took a violent turn. “Therefore, we need to remember, to understand where we come from and the destructive impact of anti-Semitism and racism of any kind on humanity. We need to embrace the reality, to understand the world we are living in and the threats that we are dealing with. And we need to fight, to act, to stop being indifferent. We cannot be bystanders to any act of racism or intolerance because we need to set an example strong enough to brand anti-Semitism as simply unacceptable in the eyes of the masses.”

In addition to hearing from Levy, now a lawyer and a member of the Latin American Federation of Young Jews, and Izzy Lenga, a British young professional working with the UK Labour Party and the Jewish Labour Movement, the conference participants were also addressed by Baruch Adler, Vice-Chairman of the International March of the Living, Michael Soberman, Director of the International March of the Living’s Emerging Leaders Program and a Senior Educational Consultant for the iCenter for Israel Education, Dr. Zohar Raviv, International VP of Education for Taglit-Birthright Israel, and Rabbi Dr. Danny Schiff, Foundation Scholar at the Jewish Federation of Greater Pittsburgh, who was well acquainted with all 11 victims of the Tree of Life synagogue shooting in the Squirrel Hill neighborhood of Pittsburgh last October.

“Some people say that anti-Semitism is on the rise, but perhaps it never really went away. In truth, it’s just emerging back into the light. Some say that Pittsburgh will go down in history as one of the many cities in which Jews were killed for being Jews. But the story is not so simple,” said Rabb Schiff when addressing the students. “It is true – there is rising anti-Semitism. But it is also true that there are those who want to embrace us and support us, to hold us up and help us rebuild. The Jewish people does not dwell alone, we have friends who want to offer their support. So if we are serious about combatting anti-Semitism, let us choose our allies and work together. Let’s not pretend that we are by ourselves.”
“Additionally, we must acknowledge that the best response to anti-Semitism is to embrace our Judaism ever so fervently and deliberately. Embracing Jewish life is the best way to frustrate the well-laid plans of anti-Semites. Every one of you can undermine their plans by committing to become the finest Jews imaginable.”
Following the lectures, the delegates were split into groups for interactive sessions facilitated by the youth delegates during which they worked on drafting defined portions of the ‘International Declaration Combating Anti-Semitism, Racism and Intolerance.’ When the students reconvened, the different parts were woven together to form a single, powerful statement, which will be read by the delegates on Thursday, May 2, during the closing ceremony of the 31st annual International March of the Living at Birkenau.

“Despite all of the wonderful things that my college gave me, it was a hotbed of anti-Semitism and anti-Israel activity, which made it really difficult and painful to express my truest identity. Those experiences woke me up to the reality that anti-Semitism exists in numerous forms, near and far,” said Hallie Goldstein, a youth delegate from San Francisco, CA, who plans on making Aliyah to Israel this fall. “Being a part of the March of the Living’s Emerging Leaders Program is such a blessing for me because it allows me to engage with likeminded individuals who are committed to fighting the same kind of bigotry that I encountered regularly in college. I am eager to get this campaign off the ground and make combating anti-Semitism a lifelong commitment.”

Prior to the conference, the 20 emerging leaders, all of whom previously participated in the March of the Living, spent four days touring Poland and discussing issues of anti-Semitism, racism and intolerance with Polish and European peers. They will now use the declaration as a launch pad to create a network of global young leaders that can be activated to advance March of the Living initiatives aimed at combating anti-Semitism, racism and intolerance. They will heavily promote the campaign via social media platforms under the hashtag #SayNoToAntisemitism.