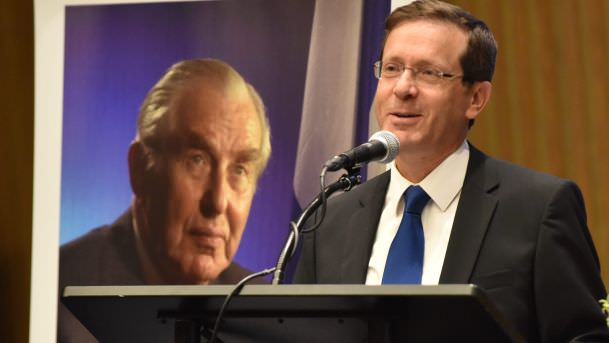 NEW YORK – Forty years ago, a certain Israeli ambassador named Chaim Herzog couldn’t sleep, and spent the night writing and rewriting an address he planned to deliver at the United Nations.
It was the eve of the approval of UN Resolution 3379, which determined that “Zionism is a form of racism and racial discrimination,” and a “threat to world peace and security.”
“The motion to equate Zionism with racism was moving from one [UN] committee to the other, and arrived on the plenary of November 10, 1975,” his son Isaac Herzog, the head of Israel’s center-left opposition, says today. Back then he was a teenager and had accompanied his father for this historic moment. “My father was wondering how to carve out the speech…By historians, this is regarded as one of the greatest speeches of the 20th century.”
The speech opened with Kristallnacht, the state-backed Nazi pogrom of 1938, and went on to include a sweeping overview of Jewish history and the need for Zionism as the Jewish people’s national movement. Inspired by his own father, Rabbi Isaac Halevi Herzog, who had publicly torn the British White Paper of 1939 (banning Jewish emigration to Palestine), Chaim Herzog ended his speech with a dramatic tear as well: “For us, the Jewish people, this resolution, based on hatred, falsehood and arrogance, is devoid of any moral or legal value. For us, the Jewish people, this is no more than a piece of paper, and we shall treat it as such.” Herzog stood at the podium and tore up the resolution.

Despite Herzog’s impassioned defense, support from the Soviet bloc and Arab nations meant the resolution was easily approved by the General Assembly. The same UN body revoked its condemnation of Zionism in 1991 – while Herzog was serving as Israel’s sixth president.
In New York last night, the United Nations and the Israeli Mission to the United Nations marked 40 years since Herzog’s historic speech in this very place. In front of some 400 guests, UN Secretary General Ban Ki-Moon offered remarks, as did Isaac Herzog.
“In every generation, we are challenged yet again. The underlying efforts of BDS, of boycotting, of undermining the righteous cause of Zionism, the right cause of the state of Israel, is still part of a major onslaught all over the world,” Herzog said. “On campuses, economic institutions, in academia and on the political level, rather than understanding that Israel is here forever, a fact of life… it is the only nation that is being challenged day in and day out, including or predominantly in this building, for its mere existence. [This is] something which is unacceptable…and should be understood by all of mankind, and that’s why we are here today.”

Prime Minister Benjamin Netanyahu joined in with a video message. “The truth has to be said,” he told the audience. “Israel continues to face systemic discrimination here at the UN. There is an irrational obsessive bashing of Israel… The image of Ambassador Herzog ripping up that shameful piece of paper is ingrained in the collective memory of an entire generation of Israelis. He didn’t have a majority in the General Assembly, far from it, but he stood up proudly in the face of hypocrisy, for the Jewish people and for truth.”
U.S. Secretary of State John Kerry reflected on the Herzog address, and on then U.S. Ambassador Daniel Patrick Moynihan’s subsequent impassioned defense of Israel. “To equate the national Jewish movement with racism and Nazism…was absurd,” Kerry said. “And even more than that, it was ominous, because it sought nothing less than to grant a global license to hate.” Kerry reiterated that “no alliance of Israel’s is stronger than the one it shares with the United States of America”, that “times may change but America’s support for Israel’s security, that will never change.” He added that “the Zionist dream can only be upheld by two states living side by side in peace and security. This is not an impossible dream.”U.S. Ambassador to the United Nations Samantha Powers also addressed the audience, saying that the resolution “called into question the moral authority and legitimacy of this institution.”