Satirical Slap in the Face 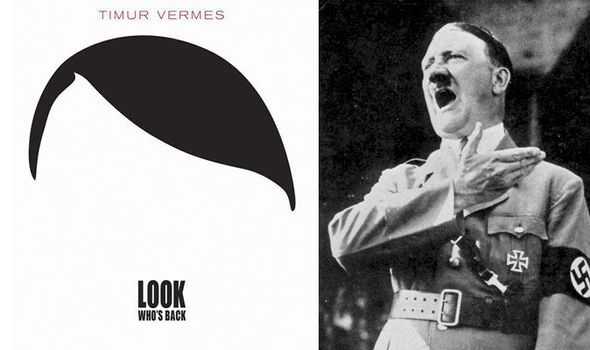 By: The Israel Opinion

Op-ed: New German film ‘Look Who’s Back,’ which satirizes Hitler, should not have been made for same reasons Charlie Chaplin regretted making ‘The Great Dictator.’

In October, “Look Who’s Back”, a satire based on the bestselling novel by Timur Vermes, which describes Adolph Hitler’s return after decades of deep sleep, will be screened in Germany. Our reporter in Berlin, Eldad Beck, has noted that the promotion machine has already begun on the Internet in order to inform the public about the upcoming event.

Cinematic satire about Hitler? I have difficulty accepting this. In any event I do not see films or plays about the Holocaust, because I think that the destruction of six million Jews should not be material for the screen or the stage, whatever the intentions of the artist.

I also don’t buy any one of the so-called explanations that accompany such films: Directors talk about the importance of the story, in part because it raises the question of whether the Germans would receive the teachings of the Führer today and follow him as they did in the past.

But this is not a serious question, because no one would really be required to answer that. And if they would ask the wider public, it’s clear that most would lie and reject any such possibility. It is also clear that a film of this nature is not made out of serious ideological considerations, but rather for financial gain.

For comparison purposes it is useful to consider the “Great Dictator,” one of the great Charlie Chaplin’s most famous films and his first talkie. The film, made by “the small man with the small moustache” in the 1930s and screened in 1940, is also a satire on the Führer of the Third Reich.

Like most of Chaplin’s films of, if not all, “The Great Dictator” is a classic film. Chaplin, who saw the film as one of his greatest achievements, as it served as a warning to the world of dictatorship and the power of a dictator, understood only later that the film was made too soon. That is, before he knew what the Nazi dictator did to the world – more than 60 million people died in World War II, which Hitler began in order to conquer Europe and the whole world. When he made the film Chaplin did not know that Hitler and his henchmen decided to destroy the Jewish people.

After realizing who this dictator really was, he took every opportunity in which he appeared before the public or the media to emphasize that had he known of Hitler’s actions, he would never have made the immortal film. “You cannot make satire about a mass murderer, one of the abominable murderers in human history,” he was wont to say.

Therefore, if a genius like Charlie Chaplin determined that he would never make a satire of Hitler, even though the film represented a professional achievement for him, why should we be willing today to see a German satirical film on the most vicious murderer in human history? Surely there were other heinous murderers, from Genghis Khan to Stalin and Mao Zedong, but an insane painter from Austria outranked them all. It’s just a pity that people use the Holocaust to fatten their bank account.