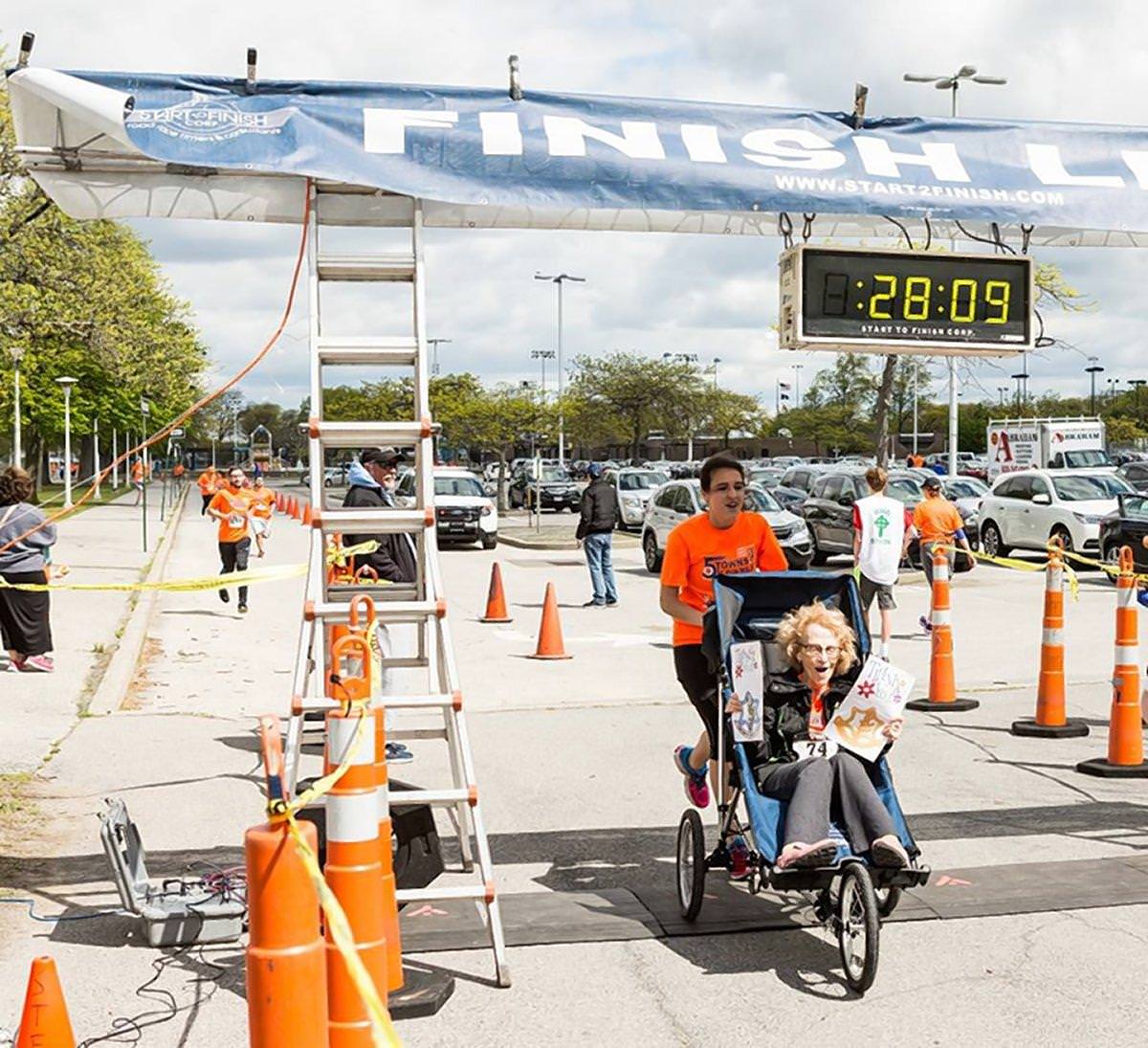 Some people run the New York City Marathon for the experience. Others do it to beat their best time. But Sarah Mizrachi is doing it for a Holocaust survivor.

Mizrachi, a 22-year-old med student at Albert Einstein College in the Bronx, has been training for her first marathon to help raise money for Irene Hizme, a Long Island resident and one of more than 2,500 local Holocaust survivors.

“My father actually ran the New York Marathon back when he was my age, so I guess it’s like a generational thing,” said Mizrachi, an Army brat who spent her formative years growing up in Minnesota.

Mizrachi, a former cross country runner at Yeshiva University, is part of a 35-member team representing The Blue Card, a nonprofit charity that serves survivors in need of assistance like Hizme. The Blue Card, which originated as a secret underground organization in Nazi Germany that helped Jews find jobs amid persecution, make ends meet or escape that genocidal regime, has been an official NYC Marathon partner since 2009. The organization’s name comes from the original blue paper cards issued to donors. Each time they made a donation, a stamp was added to their card.

“This is an extremely important and time-sensitive effort because the number of Holocaust survivors grows smaller each day. For those that are still alive, they’re in their 80s, 90s and above and they have a growing need for financial assistance with basic daily needs,” Masha Pearl, Blue Card’s executive director, told the Daily News. “They have growing medical bills, they have a higher need for a support system, and they have greater psychiatric and psychological problems and nutritional issues.”

Blue Card runners will be wearing blue shirts with the organization’s logo across the chest (the name The Blue Card with a Star of David) above the words AIDING HOLOCAUST SURVIVORS.

In 1939, The Blue Card was reestablished in the United States to continue assisting refugees of Nazi persecution resettling in the U.S.

“Now we are seeing there is a greater need for medical assistance, home care assistance, dental, which are all very costly,” Pearl said. “Housing and utilities to remain safely in their homes and to avoid being institutionalized, which creates tremendous anxiety for these individuals.”

“It was surprising and sad to hear that’s happening,” Mizrachi said. “I’m glad Blue Card is able to help them.”

The organization also lists the New York City Triathlon, bike tours, marathons in Miami and Atlanta and other endurance sports among its fundraising initiatives.

Pearl also said an increasing number of survivors are losing their spouses, “and remaining independent becomes a much greater challenge.”

Hizme, 79, was born in Czechoslovakia. As a child, she and her twin brother Rene were sent to Auschwitz, where they were separated and subjected to medical experiments performed by Nazi doctors. According to records kept by the U.S. Holocaust Museum in Washington, the group Rescue Children brought Irene to the United States in 1947, where she was reunited with Rene in 1950.

Hizme described those awful experiments in a 1995 interview with the Shoah Foundation.

“I remember injections,” she said. “And then I’d be sick … I remember having a high fever, because I know they were taking my temperature, somebody was. I really got to hate doctors. I got to be afraid … I was terribly scared of doctors, I still am. They’re a nightmare.”

Mizrachi’s own great-grandmother, whom she never met, fled Ukraine before the Nazis started rounding up Jews there. Family members that remained were eventually “wiped out,” she said, making this Sunday’s efforts more meaningful to her.

“I’m just really happy to help out in any way,” Mizrachi said.

An avid runner, Mizrachi wouldn’t have run in the marathon if Hizme hadn’t inspired her to enter this year’s race when the two met at a recent 5K on Long Island.

“She is the most inspiring, positive woman I have ever met in my life,” she said of Hizme, who is wheelchair bound and has Multiple Sclerosis. “She’s always smiling, always so positive and energetic. She has more energy than I do. She’s just incredible.”

Mizrachi will rely on all the energy she can muster Sunday when she participates in her first marathon, when she’ll be running not for time or the experience, but for someone else.