Review: The Family of Anne Frank, Made Real by Silence 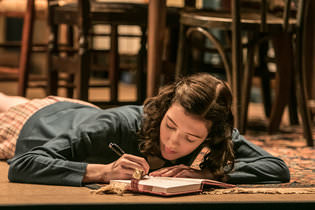 The book is famous for its words, yet the silences are the most affecting moments in “The Diary of Anne Frank.” In the play, quiet interludes are filled with humor, or fear, or tenderness, and provide the most poignant moments of this worthy production by the Shakespeare Theater of New Jersey.

A simple mention of Anne Frank is enough to cause one to lower one’s voice in a kind of reverence. Seeing the work staged, however, reminds us that the Frank family and their friends weren’t just hallowed names out of history but something far more complex: human beings, who held the usual measures of anger, warmth and confusion.

This adaptation, by Wendy Kesselman, makes that idea central to the drama. The script was the one used in the 1997 revival on Broadway and has sometimes been criticized for sacrificing urgency for a fuller sense of the family’s humanity. It’s a valid criticism, though in this production the trade-off seems, for the most part, warranted.

The story begins with the Franks’ arrival at the attic in Amsterdam where they plan to live out the Nazi occupation. Their underlying dismay is evident, despite their hopeful words.

Soon they are joined by the Van Daan family, and later by Mr. Dussel, a dentist who is also forced into hiding. Collectively they share each other’s joys and try each other’s patience. And there through it all is Anne, chattering on with an infectious optimism. Her hopes for a lovely future run in direct contrast to our knowledge of her ugly fate, and the emotions that result from such awareness can be devastating.

Hiding in the attic will be “like being on vacation in some strange pension or something,” she says, adding, “An adventure — romantic and dangerous at the same time!”

As Anne, Emmanuelle Nadeau is buoyant, presenting a cheerfulness that feels genuine. She is nicely paired with Lauriel Friedman as Margot, her more reserved sister.

Bryan Scott Johnson and Jacqueline Antaramian, as their parents, also play off their differences: Mr. Johnson as the tolerant and loving father, Ms. Antaramian as a watchful presence with a sharper edge. Patrick Toon, as Mr. Dussel, offers several subtle touches as a perplexed and lonely man.

Anthony Cochrane and Carol Halstead, as Mr. and Mrs. Van Daan, and Sean Hudock, as their son, Peter, are similarly skilled, particularly in a scene where they are forced to give up Mrs. Van Daan’s treasured fur coat. As they argue, the other residents feign disinterest yet cannot help appearing dismayed; it’s a fine example of ensemble acting, and leads into Ms. Antaramian’s best moments as a woman succumbing to anguish.

“There’s no hope to be had,” she says. “I know that. I knew it the night Hitler came to power, when that voice came screaming out of the radio. I sat there paralyzed.”

Throughout the play, which runs two and a quarter hours including one intermission, there are moments of stiffness in the dialogue, mostly forgivable, and a few forced actions. Only some of that is attributable to Ms. Kesselman’s adaptation, which was based on the 1955 play by Frances Goodrich and Albert Hackett.

Still, when the script offers its quiet sections, during the halting romance between Anne and Peter, or the times when all the residents must not speak, lest they jeopardize their hiding space, the cast, directed by Joseph Discher, is at its most alive.

As he proved with “Butler” at the New Jersey Repertory Company, Mr. Discher is skilled at moving actors around a space, in this case, Brittany Vasta’s set, which fills the stage yet is tight enough to foster a sense of claustrophobia.

While the play is useful as a history lesson (and the company has put together an impressive program of supporting events and an online guide), it’s important to let this tale speak for itself. My 12-year-old daughter, who accompanied me, was teary and moved, yet not so overcome as to look away. That’s the great effect of a story that both documents a brutal tragedy and celebrates these beautiful souls.