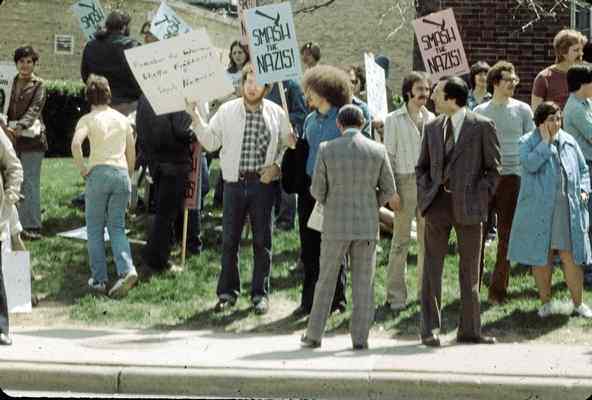 The dedication of a Holocaust museum in Illinois may be an unlikely inspiration for a documentary. But for Eli Adler of San Anselmo, a long-time award-wining cinematographer, it was the impetus to tell a story he didn’t even know he wanted to tell.

The Illinois Holocaust Museum and Education Center is in Skokie, where Adler grew up. It’s also where many Holocaust survivors, including his father, settled after liberation — and the chosen spot for a neo-Nazi march in the late 1970s.

His documentary, “Surviving Skokie,” makes its debut at the Mill Valley Film Festival, which opens today; two of the three screenings are already sold out. It’s a story about a dark and ugly time in America’s past, but it’s more than that — it’s also a personal story, his father’s story and a father-son story.

“The more I read about (the museum), the more I realized that I had to make this film somehow,” says Adler, who co-produced the film with editor and director Blair Gerskhow of San Rafael. “The seed was planted as a child, it germinated when I learned about the museum.”

Like many children of Holocaust survivors, who are often hesitant to share their stories and relive the horrors, Adler spent much of his early life hungry to know about his father’s past.

But even in the 20 years since Jack Adler, 86, began openly talking about his life as a boy in Poland, his years in the ghetto and concentration camps and how his parents, three siblings and most of his extended family perished in the Holocaust, Adler had questions.

“It was incredibly important for me to learn everything about my father’s past,” Adler, 60, says, “and I don’t even know if we learned everything about my father’s past. We interviewed him four times in the making of this film and each time more information came out. We were peeling the layers of an onion, and I think if we interviewed him 10 more times we’d get 10 more stories from him. They’re so deeply bottled inside of him.”

In the film, father and son return to Pabianice, Poland, to trace the stories of his mother, father and brother, who died in the ghetto, and to visit Auschwitz, where his younger sister died upon arrival at age 12. An older sister died at Bergen-Belsen. Jack Adler, who now calls Lone Tree, Colorado home, was just 16 when he was liberated shortly after surviving the Dachau Death March. He was adopted by a family in Skokie, where some 7,000 survivors of the Shoah lived — the largest concentration of survivors in the U.S. at the time.

Everything changed in 1977 when neo-Nazi Frank Collin — interestingly, the son of a Holocaust survivor himself — began planning a march in Skokie, defended by the American Civil Liberties Union and upheld by the U.S. Supreme Court, that divided the community. But it also catalyzed the Jews there to fight back. After decades of silence about their past and trying to quietly assimilate into American life, they became vocal and violent.

“I think if Frank Collin had known what the result would have been, he probably never would have chosen Skokie to march in,” Adler says. “What it did really is open up this survivor community. The second Holocaust museum in the country was started in a little two-story building on Main Street in 1980. This never would have happened if it weren’t for that. It’s such an ironic twist to the whole story.”

“It empowered them in a way they never felt empowered before,” adds Gerskhow, 63, whose wife is the child of Holocaust survivors.

It was not an easy film to make, for emotional and other reasons.

“Truthfully, there’s been a lot of Holocaust films and I didn’t know if we could do something that would add anything to the discourse of Holocaust,” says Gerskhow, who has frequently worked on PBS documentaries and has won numerous Emmys. “But the more I looked into it, the more we talked about it, in terms of the Skokie situation, to do it against that backdrop … it made sense.”

Although the two admit many younger people know little if anything about the events of Skokie, they believe the stories, personal and historical, in their documentary are relevant today. Anti-Semitism is on the rise in certain parts of the world, refugees are being turned away at borders as Jews trying to escape the Holocaust once were, and genocide is still occurring throughout the world.

“I’m hoping it has more of a global impact and that it’s just not the Holocaust to the Jews during World War II but it can apply to any group of people being persecuted,” Adler says. “And it’s important to not keep your secrets inside, to speak up and speak out against injustices.”