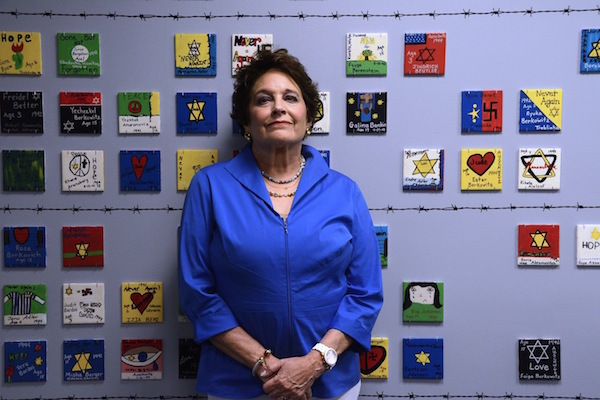 Cathy Friedman of the Birmingham Holocaust Education Center believes education is a key to preventing another Holocaust. (Karim Shamsi-Basha/Alabama NewsCenter)

At age 10, Cathy Friedman learned about the Holocaust at temple. She was shocked and asked her mother how something that horrific could happen.

“My mother looked at me with tears streaming down her face and said, ‘I dreaded the day one of my three kids would ask me about that. I knew it would be you.’ I will never forget that day,” Friedman said.

On Aug. 20, Friedman will be honored at the University of Alabama at Birmingham’s Alys Stephens Center for her work with the Birmingham Holocaust Education Center (BHEC) at an event dubbed L’Chaim. The event will feature the Steel City Men’s Chorus and musical entertainment arranged by Keith Cromwell, executive director at Red Mountain Theatre Company.

“L’Chaim means ‘to life’ in Hebrew,” said Friedman, a BHEC board member and its vice president of Development. “We’re extremely excited about the program and it’s really where we let Alabama know what the Birmingham Holocaust Education Center is about.”

Birmingham’s Cathy Friedman casts a light of remembrance against the darkness of the Holocaust from Alabama NewsCenter on Vimeo.

Birmingham’s Cathy Friedman casts a light of remembrance against the darkness of the Holocaust from Alabama NewsCenter on Vimeo.

Friedman is being honored for her humanitarian efforts, patronage of the arts and her ongoing commitment to Holocaust education in Birmingham. She remembers an event in 1994 when everything came together to point to a life full of giving and service.

“I went with several women to Auschwitz on a trip called ‘March of the Living.’ It’s an experience you think you know about, but when you see it, it’s like nothing else. This march was with young Jewish people from all over the world. I saw Chinese flags and flags from countries you would never think of. It was on my birthday and it was snowing. That experience changed my life,” Friedman said.

Deborah Layman, BHEC vice president of Programming, knows why Friedman is being honored.

“Cathy’s passion for social justice is known throughout Birmingham,” Layman said. “She is a champion for human rights. Her tireless work and boundless energy have opened many doors and initiated many partnerships for the BHEC. Our reach and effectiveness have greatly expanded because of Cathy.”

“My goal with all of this is much like the Birmingham Holocaust Education Center’s goal, and that is to educate. Look what’s happening in our world today. We say ‘never again,’ but it’s very hard to say that now. We have to get these stories and their meaning out. We have to never let people forget the Holocaust happened. It’s being denied, forgotten, and my role as a Jewish mother and grandmother is to make sure that it’s always in everybody’s consciousness. We are not going to have firsthand witness for much longer. I became a witness when I walked through Auschwitz and my goal is to have everybody become a witness,” Friedman said.

On Aug. 20, Cathy Friedman will be honored for her service with the Birmingham Holocaust Education Center, but a larger story will be unfolding. It is a story we must never forget.

For more information about the event, visit http://bhamholocausteducation.org.

Alabama Bright Lights captures the stories, through words, pictures and video, of some of our state’s brightest lights who are working to make Alabama an even better place to live, work and play. Award-winning journalist Karim Shamsi-Basha tells their inspiring stories. Email him comments, as well as suggestions on people to profile, at karimshamsibasha@gmail.com.