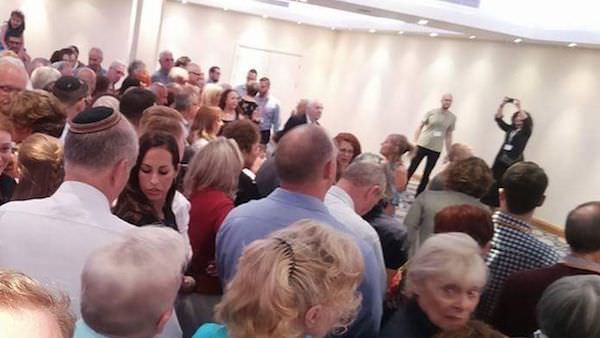 Haaretz – Growing up in Israel, Alex Kafri had always assumed that aside from his parents and sister, he was alone in this world. His mother’s entire family, he knew for a fact, had been wiped out during the Holocaust. Although his father never discussed the family members left behind in Lithuania, Kafri was given to believe they had fared no better.

Imagine his surprise, then, when he suddenly discovered many living relatives on his father’s side. A huge number, in fact. After meeting 500 members of his newfound family members at a reunion in London last week, Kafri is still pinching himself in disbelief.
“I may be 71 years old, but when I was first notified that there was this big family I never knew about, I cried,” says the grandfather of nine. “And every time I have told the story since, I get overcome with emotion.”

The story begins about 10 years ago when Kafri, a retired engineer from Haifa, sets out to investigate whether anybody on his father’s side of the family has survived the Holocaust. David, his father, had left his family in 1920 to immigrate to Palestine with a group of young Jewish pioneers. Kafri believes his father felt guilty about leaving his family behind and, therefore, never spoke about them. By the time he sets out on his mission, his father has been dead for many years.

When he begins his search, Kafri has little information to go on. He knows that his father had one childless sister in Israel and one childless brother in the United States, but neither was alive at this point to assist him with information. He knows that his paternal grandfather’s name was Joshua, that his father David was born in 1900 and that upon arriving in Palestine, he Hebraized his last name, changing it from Kukla to Kafri.

Kafri’s search yields no results. His main problem, as he soon discovers, is that there are many different ways to spell and pronounce his father’s last name.

Fast forward to April 24, 2017, Holocaust Remembrance Day. Kafri receives a call from his daughter, who reports that a colleague has just posted a tribute on Facebook to members of his family who were murdered in the Holocaust. One last name on the list stands out: Kukla. She sends her father a link and he responds to the post. “I am from the Kukla family,” Kafri writes in the comments.

“Three hours later, I kid you not, I get a phone call from a woman who identifies herself as Alisa Godfrey Stein from Seattle and asks me for whatever details I have about my father’s family,” he relays. “I sent her the few little facts I knew, and three hours later she sends me back a link to a huge family tree with my father’s name on it.”

“You are part of our family,” she writes.

Godfrey, Kafri was to learn, administers the Kukla family tree on MyHeritage.com, an Israeli-founded genealogy website that features 40 million family trees. That same day, he receives a phone call from someone named Ian Levine in London, who has also apparently seen Kafri’s comment on the Facebook post. Levine, it turns out, has spent the past two decades researching the genealogy of the clan, some members of which go by the names Kukle, Cooklin and Cuckle (all variations of Kafri’s father’s last name).
Levine had succeeded in tracing back the family to his great-great-grandfather, who had nine sons. “Ian and Alisa are descendants of one of these nine sons,” relays Kafri, “and my father was a descendant of another.”

Through the family tree, Kafri has located two cousins twice removed – the grandchildren of his grandfather’s brothers. To date, they are the closest relatives he has found. He made another surprising discovery as well.

“I had always thought that my father was one of three siblings,” relays Kafri. “The family tree shows, however, that there were another five children in the family, apparently half-siblings.”

Among the 500 family members who convened in London last week were representatives of 15 countries, including one distant cousin who flew in from Siberia.
But for Kafri, nothing conveyed the magnitude of the moment better than a scroll stretched out across the center of the hotel conference room with the family tree printed upon it.