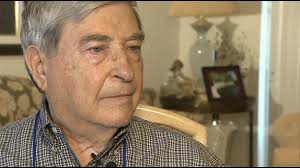 Students in Professor Markus Zisselsberger’s First-Year Seminar in Literature were able to relive history on Tuesday, when a Holocaust survivor spoke with them about his experience during the Nazi regime.

David Mermelstein, 86, was born in Kivjazd, Czechoslovakia in 1928. When he was 15, he became a victim of the Holocaust. It was 1944, the year Germany occupied Hungary, and Mermelstein was sent to Auschwitz-Birkenau. Mermelstein was of the last half-a-million people to be sent to the notorious work camp.

“We knew absolutely nothing about Auschwitz; we didn’t even know there was such a thing as Auschwitz,” Mermelstein said. “All we knew was that they were taking us to work.”

Upon arrival at Auschwitz, Mermelstein and the other 100 passengers forced into his small wagon were greeted by Dr. Josef Mengele, the infamous man known for cruel experimentation on campers in concentration camps.

During the selection process conducted by Mengele, Mermelstein’s grandparents, parents, and younger siblings were sent “to the left”- straight to their immediate death in a gas chamber.

Mermelstein was advised by a Kapo guard, a trustee inmate who supervised other prisoners, to lie about his age and say he was 17 years old, stand taller and pinch his cheeks to add color to his skin.

By standing on his two eldest brothers’ feet, Mermelstein passed as 17 and was sent “to the right” with his brothers–into the concentration camp for labor.

Mermelstein and the other campers were sent to a room, where they were told to undress and only keep their shoes. They were then given a new wardrobe: a striped cap, shirt and pants.

After asking where their family was, a guard told Mermelstein and the other prisoners, “I want you all to come to the door. You see the chimneys? You see the smoke? There are no parents, brothers, or sisters.”

When some campers tried to speak to new arrivals on the other side of a wired fence, they realized the fences were electrified and died on the spot. That was when Mermelstein understood what the smoke from the chimneys meant.

The following years spent in concentration camps were filled with Mermelstein finding ways to get by, including hiding sickness to avoid being sent to the camp “hospital,” where campers awaited death.

In what Mermelstein estimated to be the middle of October 1944, he and other prisoners were sent to Austria on a death march. In Austria, Mermelstein worked with wagons in the concentration camp Emaze, where he discovered that stealing coal from the wagons and eating it helped fight starvation.

While working with the wagons, a truck smashed Mermelstein’s hand and he was sent to the camp’s “hospital.” There, he and other campers realized how the “hospital” worked–he had an estimated 19 days left to live before being cremated.

At five days before his estimated death, Mermelstein awoke to no Germans within the “hospital.” Those strong enough to walk went outside to check, and came back calling that all the Germans were gone and that the gates of the camp were open.

Mermelstein was so close to death that he could not lift his hands or feet. To escape, he dragged his body and crawled for about three hours before finally making it outside.

There, he saw tanks that had the American flag. His concentration camp was liberated. The liberators set up tents to help the ill and started to feed survivors every hour.

In the tent, a doctor from Boston weighed Mermelstein and discovered that he was truly at the brink of death–he weighed a terrifying 42 pounds. After six weeks, he was finally able to walk.

Mermelstein finally made it to America when he was 18, where he lived in Brooklyn, New York and then Rhode Island. He met his wife in 1948, and they got married in December 1949.

They came to Miami Beach for their honeymoon, and have lived here ever since. Miami has one of the largest communities of Holocaust survivors in the US.

Mermelstein is now an active member of the Holocaust Survivors Foundation USA and has three children, three grandchildren, and one great-grandchild.

“To hear someone who has been there and who experienced the whole thing…I had shivers down my spine,” said freshman Wycliffe Grafton Jr. “He actually experienced it all; he went through one of the worst periods of time in human history in recent memory, and he’s here telling us.”

This semester is Zisselsberger’s first time teaching a first-year seminar that covers the Holocaust. Taking advantage of the survivor population in Miami and having survivors come in and speak to the students adds a layer of connection that transcends the effect written word or film, Zisselsberger said.

“The encounter with a survivor allows students to see the Holocaust as a living memory and present rather than simply as a distant historical event,” he said. “Listening to a survivor lends the study of the Holocaust a tangible and affective dimension that the reading of texts or viewing of films alone could not offer.”