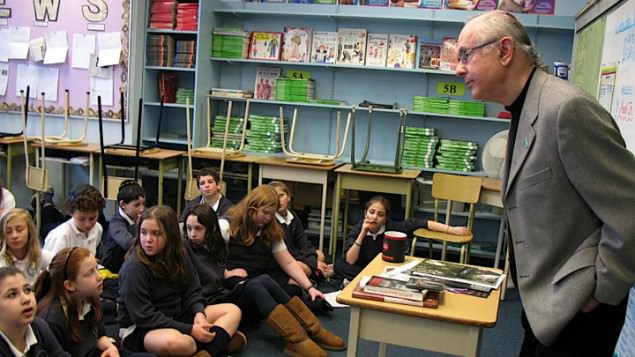 Robbie Waisman, a Holocaust survivor living in Vancouver, has a personal interest in the release earlier this week of the final report of the Truth and Reconciliation Commission of Canada (TRC), which was set up five years ago to uncover what had happened at residential schools for indigenous children during a 150­year period ending in 1996.

More than 150,000, or 30 percent, of children from Canada’s First Nations were taken from their homes and placed in these church­run, government­funded schools to be “civilized.”

The main findings of the report were made public last spring. They included the determination that what happened at the 130 schools across the country amounted to cultural genocide. It was discovered that 3,200 students died at the schools, while many others were abused physically and sexually, leading to a legacy of dysfunction for them and their families for generations. The final report released thousands of pages of contextual details, historical data and survivor testimony.

Waisman, 84, was an honorary witness to the TRC. Having survived the horrors of the Holocaust and discovered the importance and healing power of sharing one’s painful experiences, he became involved in helping residential schools survivors find the strength to speak up about the horrors they experienced and the impact these have had on their lives and families. Together with TRC head Justice Murray Sinclair, the first aboriginal judge appointed to the Provincial Court of Manitoba, Waisman traveled the country for two years, meeting with many of the estimated 80,000 surviving residential school students to share his story and to listen to theirs.

According to the Jewish Independent, Waisman made a crucial recommendation that was adopted by the commission. The Holocaust survivor told Sinclair that he had not been able to speak about his wartime experiences to his own children — and that it wasn’t until they overheard him speaking later to school groups that they learned what he had gone through.

“Based on that, when we go to a community, we bring all the [residential school] survivors in and we always make a point to bring their children in so that when the survivors are talking to us, the children are hearing them,” Sinclair told the Jewish Independent.

“That proved to be an exceptionally strong piece of advice for us to open the lines of communication within families. From the perspective of residential school survivors, often the most important process of reconciliation that they wanted to engage in, that they needed to engage in, was to apologize to their own families for how they behaved after residential schools and to be given an act of forgiveness by their children, their spouses, their family members,” he said.

Waisman, who was known in his youth as Rachmiel or Romek, was born in Skarszysko, Poland, the youngest of six children of a religious tailor and his wife. He was eight years old when World War II broke out. When the ghetto was set up in his city in 1940, his parents sent him to live on a farm in the country, but Waisman smuggled himself back into the ghetto after a month. The next year, his older brother smuggled him out of the ghetto the night before it was liquidated. A few days later, the brother smuggled him into a labor camp, where he stamped 3,200 ammunition shells a day.

In 1944, Waisman was sent to the Buchenwald concentration camp in Germany, from which he was liberated on April 11, 1945. Of the eight members of his immediate family, only he and his sister Leah survived the war.

Together with the other 429 children who survived Buchenwald, Waisman ended up in an orphanage in Ecouis, a town in northern France. Among Waisman’s friends in the group were boys who would go on to achieve fame and positions of stature, such as Nobel laureate Elie Wiesel and former Israeli Ashkenazi chief rabbi Yisrael Meir Lau.

Waisman secured an immigration visa to Canada and arrived in Halifax in December 1948 at the age of 17. He lived in Calgary for 10 years, where he earned an accounting diploma and got married.

He and his Canadian­born wife Gloria moved to Saskatoon, where they raised their son and daughter. Waisman opened a children’s clothing store, which expanded to three locations. In 1979, the family moved to Vancouver, where Waisman worked in the hotel business. In both Saskatoon and Vancouver, he was active in Jewish community leadership. He is a past president of the Vancouver Holocaust Education Centre and remains active on several of its board committees.

Waisman first started speaking with aboriginal Canadian groups at the invitation of the Canadian Jewish Congress after former National Chief of the First Nations David Ahenakew made anti­ Semitic remarks to a reporter in 2002. Ahenakew was reportedly taped calling Jews a “disease” and praising Hitler for exterminating six million of them. He was convicted and then cleared of promoting hate speech.

“The CJC took a group of chiefs to Israel after Ahenakew made his remarks. They went to Yad Vashem, and when they came home they asked if there were any Jews in Canada they could meet with, so the CJC sent me to the Northwest Territories to speak to a group of chiefs,” Waisman recounted.

was tried for promoting hatred against Jews in 1984, Waisman had said very little to his own family about his wartime experiences.

“When I proposed to my wife and my in­laws wanted to know about me, I just told them ‘I’m a Holocaust survivor.’ I warned my wife that I might have nightmares, and one time I scolded my son for not eating all the steak on his plate, saying that I would have given anything for a steak when I was in the camps. But that’s it,” he said.

Lying in bed one night when the Keegstra trial was a big news story, Waisman suddenly recalled a long­forgotten voice he had heard while trying to fall asleep in the camps.

“Kid, if you survive, tell the world what happened to us,” the voice repeated persistently. “I promise I will,” Waisman answered.

This is just one anecdote Waisman shares with those willing to listen to him, including many groups of residential school survivors who find inspiration in hearing how he and his fellow Buchenwald child survivors went on to have happy, productive lives.

They, too, tell him stories of their own, which he eagerly listens to.

“People need to see that others want to listen, that they care. When they know people have compassion for them, they gain the strength to change their ways. Jews can help in the national reconciliation process by listening and showing they care. It can really make a difference,” Waisman said.

He recounts how on one of his visits to far flung First Nations communities, he was shown a memorial in Fort Providence, some 300 kilometers north of Yellowknife in the Northwest Territories, on which hundreds of names appeared. These were the names of children who were

taken to residential schools and never returned. No one knew exactly what had happened to them, nor exactly where they were buried.

“This was done by people with high moral purpose,” Waisman said regretfully about the removal of more than 150,000 children from their homes.

“I love Canada. I have high regards for this country that allowed me to restart my life, but it saddens me to think this was done,” he added.

Waisman hopes that the findings and recommendations of the TRC will be an impetus for breaking down the walls of silence and indifference. He hopes young Canadians will learn about what took place in their country and will be taught to always respect human rights and diversity.

“It’s not enough to just bear witness. We need to show compassion and educate the next generations,” Waisman said.