Art Therapy and the Creative Process of Healing: Workshops with Dr. Tsaphie Zohar-Stendel 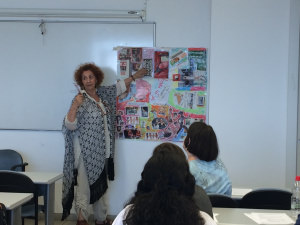 In the aftermath of the Holocaust, survivors and their descendants were faced with the challenge of coping with their past, and creating a new present and future. The coping methods and process of moving forward was different for each person. Some found outlets for their suffering and loss, channeling their pain into various forms of expression and emotional release. Others surpressed their pain, trying to move forward by attempting to bury their past. For many survivors, at some point during their life after the War, an outlet of expression was needed. Dr. Tsaphie Zohar-Stendel, a professor in the University of Haifa Graduate School of Creative Art Therapies, has much experience using Art Therapy as a creative process to help Holocaust survivors express and cope with various aspects of their past trauma, and their lives after the War. The Weiss-Livnat International MA Program in Holocaust Studies was proud to welcome Dr. Tsaphie Zohar-Stendel for a four-part hands on educational workshop on using Art Therapy with Holocaust Survivors and their descendants, as well as a form of self expression and emotional release for our students.

Collaborative Art Therapy collage made by Holocaust survivors under the supervision of Dr. Tsaphie Zohar-Stendel

During the first two sessions, Dr. Zohar-Stendel showed our students the collage pictured above that was made as a collaborative effort by a group of Holocaust survivors under her supervision. She explained that it is not only the result, but the process of creating the art that is therapeutic. She explained how to effectively facilitate Art Therapy, both in a one-on-one setting, and in a group. Our students noticed that the collage showed aspects of life that the survivors felt they lost, but also showed everything that was important to them in their lives after the War. The collage depicted some of the loss that the survivors were left with as a result of the Holocaust, such as the loss of youth and innocence, but also showed what they gained after the War such as family, home, and plenty of food. Dr. Tsaphie Zohar-Stendel spoke about the process that occurred as the Survivors worked on this project together, how they chose what they wanted to depict, and what they wanted to leave out. The process allowed them to express what they were feeling in their life, to bond with other Survivors while finding similarities and differences, and also allowed them to show their past, present, and future as one artistic representation, just as the experiences were forever connected and intertwined in their lives.

During the third and fourth sessions, our students were given the opportunity to create a piece of artwork on their own. They were asked to depict anything that they felt they wanted to express that is related to their year of study as students in the Weiss-Livnat International MA Program in Holocaust Studies. Many of our students were surprised to find that this creative process of artistic expression allowed them to release emotions that had also been surpressed. When studying a subject matter that is deeply emotional, this creative process allows for a necessary outlet for the emotional aspects that come naturally with this subject matter.

Dr. Tsaphie Zohar-Stendel’s workshop provided our students with an introduction to using the creative process of Art Therapy. As our students enter the field of Holocaust Studies and begin their careers, they will each find areas where this process can be applied to their work, or as an outlet for their own emotional expression. The Weiss-Livnat International MA Program was extremely honored to host Dr. Tsaphie Zohar-Stendel for a powerful four part workshop on the beneficial creative process of Art Therapy.