A Pilot and Holocaust Survivors, Bound by War’s Fabric, Are Reunited in Brooklyn 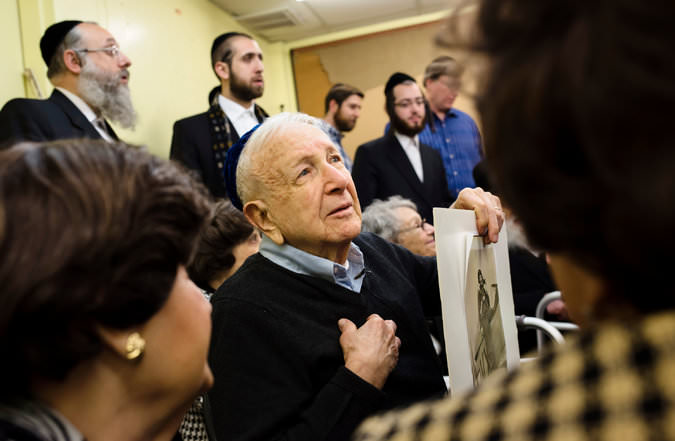 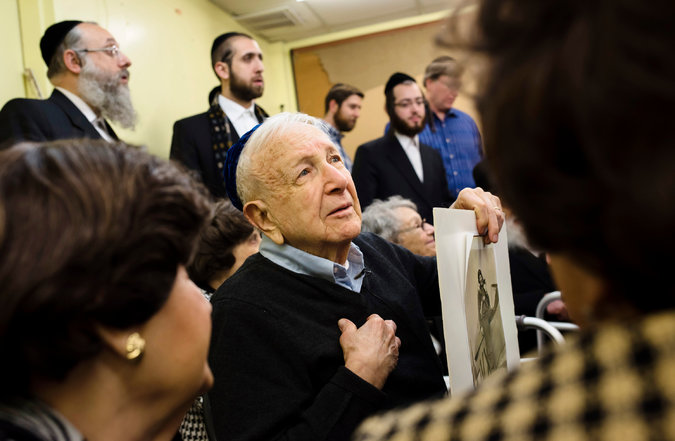 Alan Golub, center, at a reunion last month in Brooklyn with some of the Hungarian women he helped as a pilot during World War II CreditKarsten Moran for The New York Times

You never know when a pistol pointed in wartime will lead to hours of emotional blessings in Brooklyn 70 years later.

Sometime in April 1945, Alan Golub aimed his gun at a shopkeeper in Eschwege, in central Germany. He was serving as a pilot with American forces that had liberated the Buchenwald concentration camp. He had just met three dozen young Hungarian Jewish women, newly escaped from slave labor making Nazi weapons. They were hiding in a school in Eschwege, shivering and dressed in rags. He wanted to buy them fabric to make clothes, but the shopkeeper had refused him, saying there were rationing rules that she had to follow.

He owns a copy of a 1945 photograph of the Hungarian women, wearing nearly identical dresses stitched from the bolt of dark flowered cloth that he bought at gunpoint. After the war they wondered what happened to the kind American soldier — their nickname for him was Gub Gub — and he wondered what happened to them. Last month, he and three of the women had a tearful reunion, the result of emails flying for months between the outskirts of Boston, where Mr. Golub lives, and Budapest, Germany, Israel, Manhattan and Washington.

The Pesach Tikvah social service agency in Williamsburg, Brooklyn, hosted the reunion on Oct. 26 for the three Eschwege survivors and a hundred relatives and friends, mostly members of the Hasidic community. The women, Sari Gruenzweig, Esther Epstein and Lea Singer, sat beaming beside Mr. Golub for hours, as the crowd called out grateful words in English, Hebrew and Yiddish.

The families told Mr. Golub about children, grandchildren and great-grandchildren, and someone in the throng held up a baby, a great-great-grandchild of a survivor who had worn the fabric he had procured. He remembered how he had also brought food and coal to the marooned women in Eschwege. They had been enslaved in a satellite camp of Buchenwald and sent on death marches. They had seen countless children and old people from their Hungarian villages taken away.

Mr. Golub had been the first person to restore some of their dignity after a year in torment.

“I sewed 16 dresses; the 17th dress was mine,” Mrs. Gruenzweig told the crowd at Pesach Tikvah, explaining how she had made good use of the flowered print for her friends in that chilly school. She had scrounged up thread from old clothes scraps. Her husband, Martin Gruenzweig, sat beside her as she told the story again, the scar from a Nazi bullet visible on his right hand; the bullet had been meant for his skull when he was shot into a mass grave.

His three sisters had been holed up in that same school, and when he found them again, they introduced him to their talented seamstress friend as a potential bride.

Betty Ungar, one of the Gruenzweigs’ daughters, said her mother had not let wartime horrors embitter her. In their tight-knit Brooklyn community, Mrs. Ungar said, when “anybody needed help, they came running to my mother.”

At Pesach Tikvah, everyone passed around copies of the group portrait that an Army photographer took in 1945. The women, in their dresses made from the cloth bought at gunpoint, posed at the Eschwege school with an Army chaplain, Robert S. Marcus, who had been comforting the frail survivors at Buchenwald, too. Mr. Golub’s original copy of the photo, which he donated in 1999 to Yad Vashem, Israel’s Holocaust memorial, is inscribed on the back with the women’s names and a thank-you note to Mr. Golub.

The crowd took photos of Mr. Golub and the survivors holding up copies of the group portrait. People admired the varied collars, sleeves, buttons and pockets on the dresses and remembered the names of ancestral Hungarian villages. Mr. Golub, a retired toy and sporting goods distributor from Canton, Mass., briefly summarized his own 70 ensuing years spent raising five children with his wife, Dorothy. In the crowd, taking more pictures and answering and asking questions, was the Golubs’ daughter Abby Sullivan, her husband, Gary Sullivan, and their children.

There were brief speeches by Pesach Tikvah executives and the head of the board, Rabbi David Niederman. But mostly, impromptu blessings poured forth for Mr. Golub: “There isn’t enough ink to write down all the good deeds that you did!” and “You saved a whole people!” and “May you live to be 120!”

Mr. Golub did not intend to be fussed over. “I’m a little embarrassed by it all, to tell you the truth,” he said in a side conversation. “I don’t need the honor. I’m just happy that I played a very, very small part in helping unfortunate people. I felt that it was a duty that had to be done.”

A year ago, Mr. Sullivan, a prominent dealer in American antiques, had grown curious about the fates of the women in the matching dresses and tried to research them. In July he was put in touch with a Hungarian museum expert, Anna Czekmany, who contacted various institutions including Beit Hatfutsot, the Museum of the Jewish People in Tel Aviv. She was eventually directed to a German historian, Fritz Brinkmann-Frisch, who runs a memorial museum for slave labor victims in Stadtallendorf, where the Hungarian women had performed hazardous, filthy tasks for Dynamit Nobel, a chemical and weapons company.

Mr. Brinkmann-Frisch had previously seen the 1945 portrait and met with the Eschwege survivors over the years. He sent Mr. Sullivan some contact information from the 1990s. Mr. Sullivan unearthed phone numbers for a few women who had settled in Brooklyn, but he reached older people who could not hear well and preferred to speak Yiddish. Last month, he was put in touch with Pearl Lam and Rivka Schiller, researchers who are fluent in Yiddish, who made visits and calls. Ms. Schiller also suggested contacting Pesach Tikvah, in case anyone there recognized any names on the photo.

It so happened that the volunteer coordinator for the agency’s Holocaust survivor program, Sara Lichtenstadter, is an in-law of the Gruenzweig family. She had heard the story of the dresses many times.

She promptly set out to tell the women and their children, grandchildren and great-grandchildren that Mr. Golub had been found.

The Sullivans happened to be taking Mr. Golub and his wife to Brooklyn, where Pesach Tikvah is located, for a cousin’s 65th anniversary party on Oct. 25.

With a few days’ notice, Pesach Tikvah sent out invitations. Phones were soon ringing with people wondering how many family members they could bring.

“We would have had hundreds of people” if there had been a little more time to prepare, Zalman Kotzen, one of the executives, said.

“I put all my business plans away” to be able to attend Mr. Golub’s party, Mrs. Ungar said. (She has 10 children and runs two bus companies, with routes between New York and the Washington area.) She insisted that family members join her to meet the rescuer. “I didn’t give them a way to say no,” she added.

After two hours at Pesach Tikvah, there were still stories left to share, but there were children to feed, doctors’ appointments to keep and long trips home.

Mr. Golub complimented Mrs. Gruenzweig’s dresses one more time. “You did a wonderful job,” he told her.