Young and Old Walk Hand in Hand: For 25 Years the March of the Living Has Striven to Bond High School Students with Holocaust Survivors 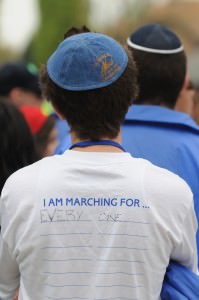 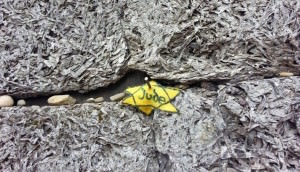 She walked into the Belzec extermination camp in Poland to visit a newly opened memorial – and found her mother’s name, Ettel, etched into the wall. It was 2005, on Mother’s Day, more than 60 years after she had last seen her mother.

“It’s like my cemetery. We don’t have graves to visit, so now once a year when I go there, it’s like going to the cemetery there for me, my family,” the 79 year old says of her experience at the death camp where almost 435,000 Jews went to die.

Now Mrs. Ekstein’s story will be told at a UN-hosted exhibit in New York celebrating 25 years for an organization that bridges the gap between high school students and Holocaust survivors.

Since 1998, the March of the Living has organized a week long trip to Poland for a group of high schools students. The students take the trip with Holocaust survivors, learning about the genocide and examine “the roots of prejudice, intolerance and hate”

They also participate in a three-kilometer march from Auschwitz to Birkenau the largest Nazi concentration camp during the Second World War. More than 200,000 students, from various backgrounds, have taken part in the program since its inception. 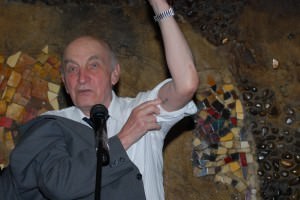 Jerry Kozminski, right, shows his concentration camp tattoo to students visiting Auschwitz. He and his family risked their lives to rescue and hide 22 Jews from the Nazis. Photo: Igal Hecht

Eli Rubenstein, National Director for the March of the Living Canada, says the event is especially poignant for survivors. “Now they are not marching towards an almost certain death, but toward freedom, with pride and dignity”, he says.

This year will be Mrs. Ekstein’s fourteenth time on the trip. She has attended with most of her family, which consists of three children, eight grandchildren, and one great grandchild.

When Mrs. Ekstein was seven years old, the Nazis forced her family into a ghetto and her father asked a kind Polish man to save his only daughter. The stranger took her in, gave her a new name and taught her about Christianity, until a neighbor revealed her identity. When spent seven weeks hiding in a cupboard, the same stranger rescued her again.

At the end of the war, she discovered her mother and father had died. She left Poland in 1946 with her aunt – who had been rescued by Oskar Schindler – and started a new life in Canada, 2 years later. “We are four generations, just because one man had the courage to save a little girl”, she says. 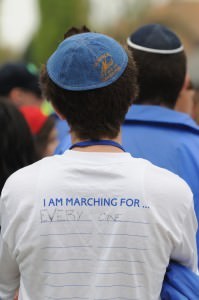 “I am marching for every one” Photo: Y. Zeliger

The UN exhibit will celebrate hundreds of poems, quotes, photos and videos, from the experience of students, and survivors during the trip.

Rose Shentow, wife of a former Auschwitz prisoner, has been on the trip four times and the March has touched her family in many ways. But as a former teacher, she says she is most interested in the impact the trip has on students.

On her first trip, Ms. Shentow noticed a teenaged girl who was transfixed with one particular item at the Auschwitz museum collection. It was a pair of red-haired braids that had cut off a little girl’s head – the braids mired the same red hair of the student.

“I never forgot the scene. I still get shivers up and down my spine when I think of that young lady looking at that pair of braids” she said.

As for Mrs., Ekstein, she will host two pieces at the exhibit. Her final piece is a quote to her daughter and granddaughter as looks back at a sea of people marching from Auschwitz to Birkenau. “You see? Hitler did not win.”In 2012, Lauren Colt, a 19-year-old student from Toronto went on the March and kept a diary of her experience. She also had recurring nightmares of bring taken away from her family for a couple of months after the trip. “I kept putting myself in [the victims’] shoes,” she said, “It is really emotional”.