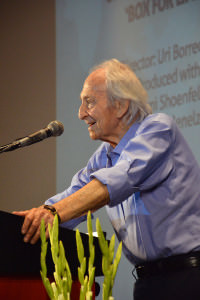 One of Israel’s best-known Holocaust survivors told a packed audience in Tel Aviv on Tuesday evening about his genuine fear that the Nazi genocide will not be remembered 50 years from now.

Noah Klieger expressed this concern at an event that doubled as the release of a documentary film about his having staved off the gas chambers at Auschwitz by lying to the SS about being a professional boxer and a celebration of his 90th birthday.

Klieger, who is still on the staff of the Israeli daily Yediot Aharonot — making him the oldest non-retired journalist in the world — described a bleak view of the future.

“Young people don’t know about the Bar Kochba revolt, so I’m worried the Holocaust won’t be remembered either,” Klieger said, referring to the second century Judean war against the Romans. “But as an optimist — something I’d have to be to have survived what I did and be standing here today — I hope I’m wrong.”

The biographical film, which Klieger said he was seeing for the first time with the hundreds of people gathered in his honor — among them members of the Israeli government, the media, ambassadors, rabbinical leaders, fellow survivors, IDF brass and soldiers — gave a moving overview of the trials and tribulations of a Strasbourg-born Jewish boy robbed of his youth by Hitler and his henchman.

Klieger recounted that while at Auschwitz — which he called “the world’s largest cemetery, without a single grave” — he held tightly to three dreams:

The first was living through the nightmare and surviving the camp.

The second was to tell the story, even though it is a story that cannot be explained. There was no reason whatsoever for what was done. But I knew I had to tell it, and to as many people as possible.

The third was that, if I managed to accomplish the first two, I would do anything and everything to bring about the establishment of the state of Israel. I would be the most ardent Zionist I could be.

Well, I realized all three dreams.

Indeed, Klieger has spent the decades since his liberation from the camp, where he shared a barracks with the late Elie Wiesel, telling and re-telling the story of the Jewish genocide in Israel and around the world at every opportunity — in seven languages.

Klieger was caught by the Nazis and sent to Auschwitz while working with the Belgian underground and French resistance to help smuggle Jewish children to safety in Switzerland. After the war, he kept his vow to Zionism, becoming a crew member on the famous ship, Exodus 1947 — turned away from Palestine by the British — and fighting in Israel’s War of Independence.

He has also been a permanent fixture at the March of the Living (MoL), the annual trip organized for students from Israel and the Diaspora to visit Poland and walk the three kilometers between the Auschwitz and Birkenau camps.

Tel Aviv-Jaffa Chief Rabbi Israel Meir Lau was among the attendees who spoke in Klieger’s honor on Tuesday, comparing his “dear friend, Noah” to the biblical giant of the same name.

“The first Noah emerged from the ark and got drunk,” said Lau, quoting the Torah. Lau explained that Noah had survived the flood only to be met with the loneliness of a man left with no friends or family. “But this Noah did not emerge from the Holocaust and escape into alcohol.” Instead, Lau said of Klieger, he continues to confront the demons and educate others about them.

The documentary film, “Boxing for Life,” that was screened on Tuesday at the Cinemateque in the White City, was produced for Israel’s Channel 1 by Shemi Shoenfeld and Amitan Menelzon. It was directed by Uri Borreda. The evening was hosted by the Israeli-Jewish Congress and International MoL, with the support of the Tel Aviv-Jaffa Municipality, Adopt-A-Safta, the Ambassadors’ Club of Israel and the Israel Forever Foundation.