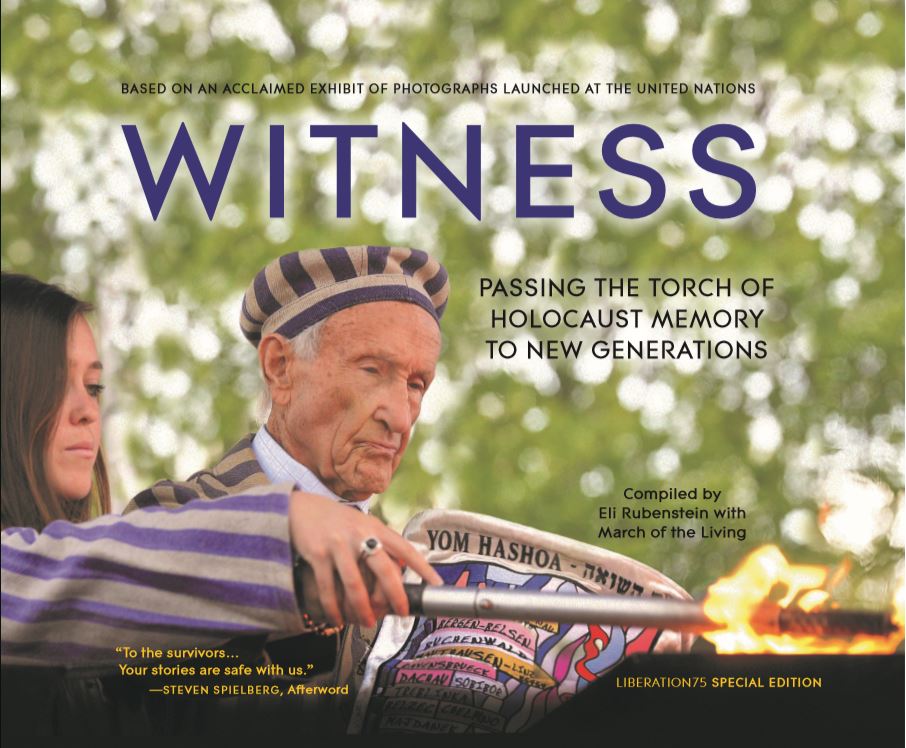 Witness is produced by International March of the Living, with help from the USC Shoah Foundation founded by Steven Spielberg.

Book includes words from Barack Obama, Preface featuring Pope Francis, plus Afterword from Spielberg: “These stories are a reminder of unwavering courage, hope.”

To commemorate today’s 75th anniversary of the end of World War II and the liberation of Europe from the brutal rule of Nazi Germany, International March of the Living, with help from the USC Shoah Foundation (founded by Steven Spielberg after having directed Schindler’s List) have added a unique technology to the latest edition of the book Witness Passing the Torch of Holocaust Memory to New Generations, providing a living history of the Holocaust.

In the updated edition of Witness, each photograph of a survivor, rescuer, or WWII liberator is embedded with an invisible barcode. Pointing a smartphone at the image (enabled with the free Digimarc app) connects the reader to the vivid and full video testimony of the individual pictured. In total, 75 videos housed on the March of the Living or USC Shoah Foundation websites can be accessed with just a mobile device.

Witness author and March of the Living Director of Education, Eli Rubenstein said,

The lessons of the Holocaust are timeless. Now more than ever, we need to hear and internalize the stories of survivors, in order to truly understand what can happen when anti-Semitism, hatred and discrimination are allowed to go unchecked.

This latest edition of Witness brings to life for anyone with a smartphone, the incredible personal stories of survivors, rescuers and liberators. As this generation dwindles, which witnessed, survived and defeated the greatest evil in human history, this book could not be more timely.

Originally published in 2015 to much acclaim and translated into Spanish, Hebrew, and Polish, the 2020 edition of Witness is being launched to coincide with the 75th anniversary of the end of WW11. It has been enriched with an entire section of compelling new liberation stories in print and video, along with additional content honoring those who rescued Jews during WWII. The survivors, rescuers and liberators featured in the book come from across the world, including the United States, Canada, Europe, Australia, and Israel.

The new book includes words from Barack Obama which remind readers how important “witnesses” are to a true understanding of history and how we behave to one another today and in the future. There is also an Afterword by Steven Spielberg, while the Preface features Pope Francis and Pope John Paul II.

In the Afterword, Steven Spielberg addresses the survivors, saying “Your stories are safe with us. They remind not only of your unwavering courage, but also that the days ahead are going to be filled with light and hope.”

The videos linked to survivors’ liberation stories may be viewed in the player below as well as by clicking here.