Who will tell survivors’ stories when they’re gone? by David Benson, BJE LA, 2015 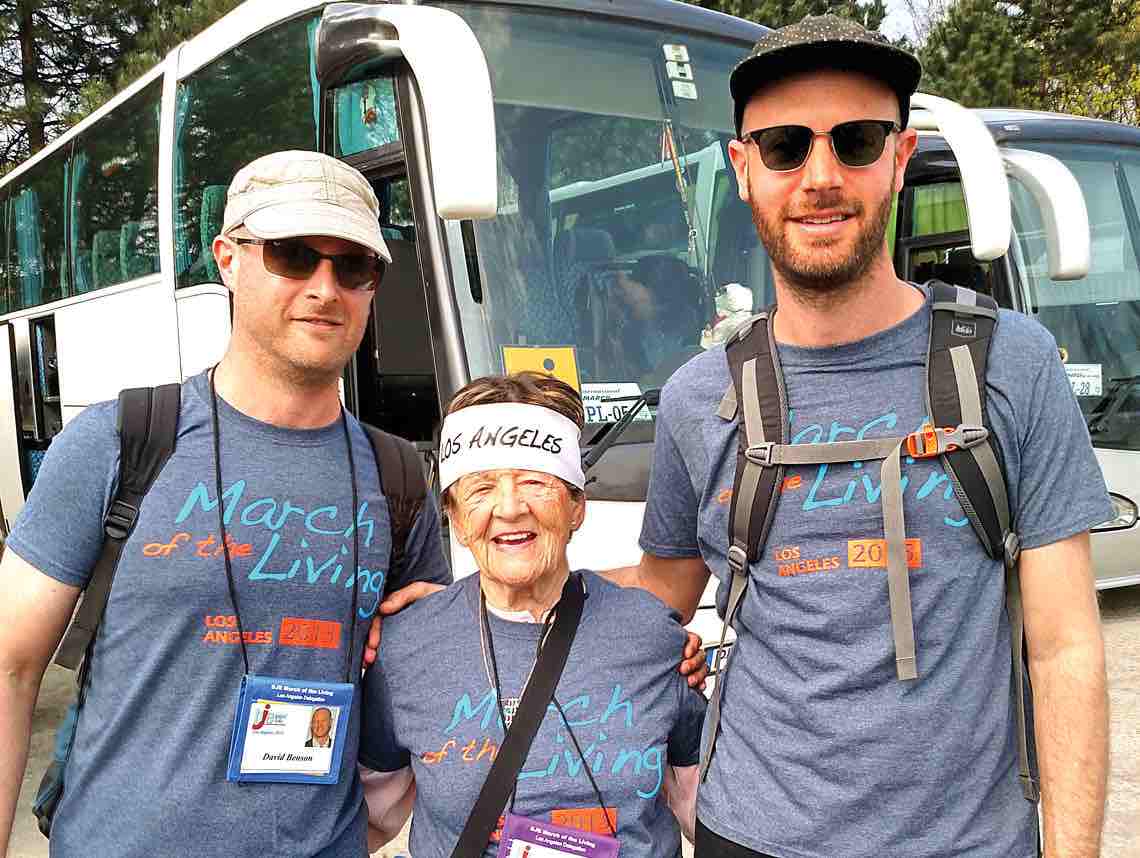 In the spring of 2011, David Benson, found himself walking with his grandmother, Holocaust survivor Sidonia Lax, down the “black path” that once led to the crematorium at the Majdanek concentration camp in Poland. It was Lax’s fifth trip with the annual International March of the Living as a survivor, with the Builders of Jewish Education (BJE) teen delegation, his first as part of a large family contingent with the BJE Los Angeles adult group.

As they headed toward the massive circular mausoleum that now stands at the end of the path, holding the ashes of some of the approximately 59,000 Jews and 19,000 non-Jews who were murdered there, Benson, then 35, found himself alone with his grandmother, then 83, for the first time during the trip. Something came over him, something that he can’t explain to this day, and he vowed,

“As long as you want to come on this trip, I will come with you. And I’ll come in your stead when you can’t anymore.”

Benson’s sacred promise to his grandmother represents a welcome response to a mounting challenge facing museums, historians and educators as survivors of Nazi-era atrocities grow old and die, taking their firsthand accounts with them: How will their memories be kept alive for future generations? More and more, it is the survivors’ descendants — their sons, daughters, grandchildren and great-grandchildren — who are taking on that responsibility, and beyond them, anyone who hears their stories.

It also is spurring wider efforts to record survivors talking about their exploits for posterity, much in the way the USC Shoah Foundation videotaped more than 50,000 testimonies of Jewish survivors between 1994 and 1999 and how the United States Holocaust Memorial Museum in Washington, D.C., is continuing to expand its collection of more than 12,000 audio and video recordings of Jewish survivors.

Benson is one of the many children, grandchildren and even great-grandchildren of survivors — known within the Holocaust community as Second, Third and Fourth Generation — who are stepping up to tell the survivors’ stories as educational programs, institutions and museums worldwide prepare for a world without survivors.

For the past five years, Benson has left behind his wife, his two young children and his business for a week to accompany his grandmother to Poland. This year, after 10 March of the Living trips, Sidonia is unable to participate. And although David cannot attend this year because of preparations for Sidonia’s 90th birthday and other conflicts, he already has signed up to lead an adult group next year.

He knows his grandmother’s story intimately, how she and her parents had been crammed into a small cellar bunker with 35 people in the Przemysl ghetto in Poland for three months in the fall of 1943. An escape plan for her family failed, and her mother was captured and later murdered. A few days later, her father slipped out of the bunker in search of a smuggled apple for his severely undernourished daughter. He never returned.

Benson has followed his grandmother inside her former barracks in Birkenau, one of six camps in which she was imprisoned, where she’s pointed and said, “This is the bunk where I slept.”

“There’s nothing like someone, firsthand, standing there and saying that,”

said Monise Neumann, director of the BJE Center for Teen Experiential Education, who has led 12 trips with the BJE Los Angeles delegation. “You can’t duplicate that.” Still, she said, “David serves as an amazing kind of figure as we transition from firsthand witnesses.”

Seven decades ago, at the end of World War II, approximately 3.8 million European Jews were alive, according to research by demographer Sergio DellaPergola of the Hebrew University of Jerusalem. Today, among Jews who were in camps, ghettos or hiding under Nazi occupation, only 100,000 worldwide are alive, including 14,000 in the United States, Amy Wexler, public relations manager for The Conference on Jewish Material Claims against Germany, said via email.

In Los Angeles, extrapolating from the 1997 Jewish Population Survey, in which survivors self-identified, demographic researcher Pini Herman estimated the current number of living survivors at 3,000, excluding child survivors, those born Jan. 1, 1928, or later.

But even among the living survivors, many are ill or memory-impaired. And others, especially those born toward the end of World War II, survivors by definition, simply were too young to consciously recall their Holocaust ordeals.

Over the years, staff members have become the storytellers for the next generation. Freddy Diamond, a survivor who accompanied the group five times over 10 years, used to stand outside Block 11 of Auschwitz, telling students the story of how his brother Leo, a member of a little-known resistance group, was tortured and hanged in front of 15,000 inmates. When Diamond could no longer attend, Phil Liff-Grieff, BJE associate director, stood outside Block 11, holding a photo of Diamond and relating his story. Now Neumann tells it.

“Look, it’ll never be the same,” Neumann said. “But because of the way the stories are being told, people will tell you that they’ll always remember them.”

In more recent years, Neumann and others have recorded survivors recounting their stories at different locations in Poland. Staff members carry these narratives on their digital devices.

Neumann also enlists the help of Third and Fourth Generation survivors who are March of the Living participants. In 2015, Caroline Lowy, then an 18-year-old student at Milken Community Schools, stood near a cattle car on the Auschwitz-Birkenau tracks and talked about how her great-grandfather Hugo Lowy arrived at Auschwitz in April 1944. He was dispatched to a line of men selected to work, but he refused to part with his tallit bag, which a guard grabbed and threw to the ground. When the guard turned his back, Hugo retrieved the bag, refusing to go anywhere without his tallit and tefillin. The guard beat him to death.

Caroline had attended the dedication of the cattle car in 2010, which had been restored and donated to Auschwitz-Birkenau by Hugo Lowy’s son, her grandfather Frank Lowy. She felt honored to retell the story to her peers, though it was difficult. But, she said, “I have a duty as a young Jewish person to keep telling the stories.”