‘We won’t be calmed,’ Peres tells March of Living participants 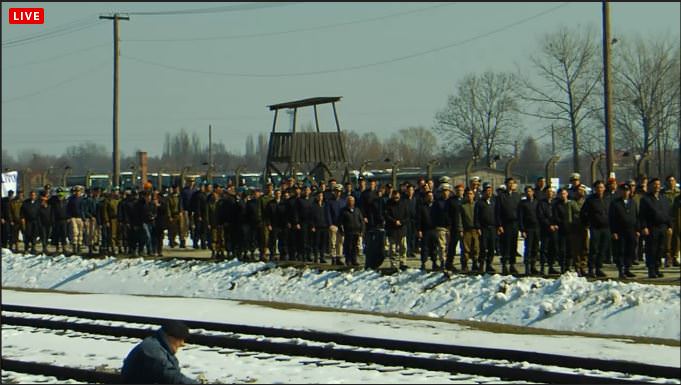 Participants in the March of the Living on Monday (photo credit: screen capture)

IDF Chief of Staff Benny Gantz led Monday’s March of the Living ceremonies at Auschwitz-Birkenau, along with Tel Aviv’s Chief Rabbi Israel Meir Lau, himself a child survivor of the camp.

Some 10,000 participants made the three-kilometer walk Monday afternoon. Also addressing them, along with Gantz and Lau, was to be philanthropist Frank Lowy of Australia, a Holocaust survivor whose father perished in Auschwitz-Birkenau.

Delivering a recorded message to participants, President Shimon Peres said Israel would not forget the pain of the Holocaust, continuing a theme from his speech at the state’s official ceremony the night before.

“It is not a matter of remembering or forgetting, their blood flows in our blood, boiling till this day,” Peres said. “We will not be calmed. The distance is not that big, it happened 74 years ago, it is part of our biography, not part of our history.”

Peres said that the Jewish population of the world has not recovered from the Holocaust, and its numbers are still less than they were on the eve of World War II.

“The pain, the wound, the lacking is still there,” he said. “They live inside us. We live from what happened to them.”

Gantz arrived in Poland on Sunday, and declared that the state of Israel will ensure the horrors of Auschwitz never happen again.

Gantz, whose mother is a Holocaust survivor, was accompanied by a delegation of Israel Defense Forces officers and bereaved families of soldiers.

This year marked the first time that an IDF chief of general staff was leading the march.

The stated aim of the March of the Living is to impart the lessons of the Holocaust, celebrate the history of Jewish survival, and instill a passion for social justice. The journey starts in Poland and continues in Israel, where participants honor Israel’s fallen soldiers on Yom Hazikaron — Memorial Day, and celebrate Israel’s Independence on Yom Ha’atzma’ut.

The annual program brings tens of thousands of high school students from around the world for a week of intensive education and touring in Poland and Israel, to study the history of the Holocaust and examine the roots of prejudice, intolerance and hate. To date, over 180,000 students have participated.

Peres told the participants that they would be carrying the entire Jewish people with them as they made the three-kilometer walk.

“With your strides will go the whole people,” Peres said. “We lowered our heads for their memory, raise your heads for the State of Israel. Go in peace and return in peace. We will continue to remember the pain and continue to build a state that has not lost hope to heal the entire world.