‘We run like mouses to hide,’ a Holocaust survivor saved by ‘The Zookeeper’s Wife’ remembers 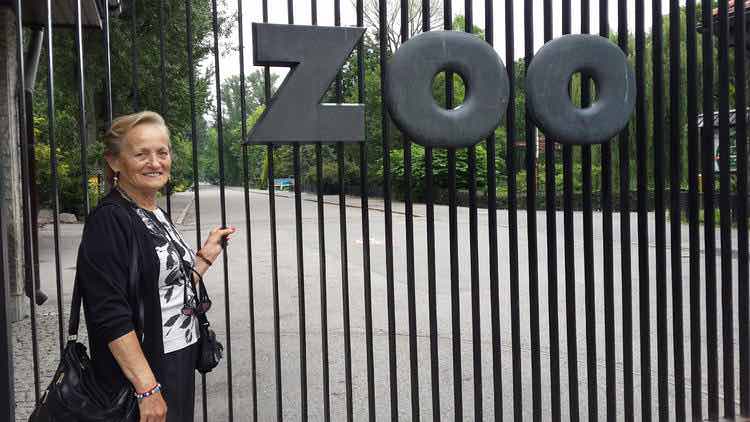 Holocaust survivor Stefania Sitbon (nee Kenigswein) visits the Warsaw Zoo, where she and her family hid for more than two months during World War II. (Sarit Shina / March of the Living)

Stefania Sitbon sits in the dining room of her Toronto apartment, surrounded by evidence of her life. Behind her a cabinet displays tea cups, a menorah and a dozen photos, including some of her three children and seven grandchildren. On the wall to her left hangs a calendar from the Iraqi Jewish Assn., to which her Tunisian husband, Freddy, belongs.

There is also one photo of her parents, taken in the 1940s. They are dressed up and smiling.

There is little evidence, however, of the years surrounding the taking of that photograph and none of the time Stefania spent in hiding, a 4-year-old Jew in Nazi-occupied Poland living in the basement and cages of the Warsaw Zoo.

For Stefania, “The Zookeeper’s Wife” is not a film or a book; it’s a memory.

She was a baby when the Germans marched into Poland and her father, Samuel Kenigswein, joined the resistance. In 1943, he realized that an uprising from the Jewish ghetto, where the family lived, would soon be met by the ruthless and well-armed Germans. He feared that his wife, Regina, and two children, Stefania and her older brother Moshe (then known as Miecio), would be killed.

“My father came and said, ‘The ghetto will be destroyed … and I would like you and the kids to survive,’” she says now. “Then, my mom asked, ‘Where [will] I go?’”

The answer was the Warsaw Zoo.

The story of how Jan and Antonina Zabinski provided refuge to hundreds of Jews during World War II, first told in Diane Ackerman’s nonfiction book, has reached millions more through a recent film adaptation starring Jessica Chastain as Antonina.

Stefania and her brother are the only known living survivors of the hundreds who found safety at the zoo. The story of the Kenigsweins was one of many detailed in Ackerman’s novel, although Stefania did not participate in the writing of the book.

Moshe attended the film’s premiere in Tel Aviv, Stefania saw it at a local theater with nine other Holocaust survivors she had met during a trip with the March of the Living, an annual trip enabling high school students to visit Poland and Israel with survivors to learn about Jews during WWII.

She says, with remarkable simplicity, that watching the film made her feel sad but that it was an accurate portrayal of events, such as how Jan Zabinski smuggled Jews back to the zoo while going out to get food for the animals.

“They showed how he took out the Jews from the ghetto,” says Stefania. “He came with a truck, and there was food for the animals … he put a Jew first and all the garbage on him, they don’t think a person would be there, but for a life, you do whatever in this situation.”

At 78, Stefania is now retired and lives in suburban Toronto with Freddy, her husband of 57 years.

She was born in February 1939, months before the war broke out. When she was 1½, her family moved into Warsaw’s Jewish ghetto. She remembers her mother sneaking out to buy food.

The Kenigsweins had been friends with the Zabinskis before the war, so when Samuel learned what his friends were doing, he brought his family to the couple while he continued fighting.

Some people stayed at the zoo just a day or two, until resistance members found them longer-term places to hide. But because of the friendship, Stefania’s family remained for 2½ months.

She and her brother slept on mattresses in a basement; Regina had a separate room, and their father visited about once a month. When Antonina gave birth to her daughter Teresa, an event portrayed in the film, Stefania’s father built the baby’s crib.

“They were aware of the risk,” Teresa says via email. “Helping Jews, and not just hiding them, could mean the death penalty for the entire family. Few people know what happened in Poland during the war, and this movie shows it quite accurately. It also shows the idea of humanity, and I’m glad that this idea has been spread through the history of my parents.”

Stefania spent much of her days sitting in the basement, but when the zoo staff was gone, she and her brother would run around and play.

The German army killed or stole many of the zoo animals and used parts of the facility for ammunition storage. As in the film, when the German soldiers arrived, Antonina would play the piano as a warning and Stefania and her family would hide in empty animal cages.

But their time ran short.

One day, the Zabinskis’ son, also portrayed in the film, overheard the kitchen staff complaining about how much food the couple ate.

“He went to ask for more food,” Stefania says. “He heard the cook say, ‘They are crazy or what? There is no food, and they eat like pigs.’”

The Zabinskis feared the staff would raise the issue with the Germans, so Stefania’s family organized its escape to the outskirts of Warsaw; Antonina helped dye their hair blond.

The family split up to go to separate safe houses in Warsaw but were able to reunite after the war.

Stefania’s father restarted his family’s successful carpentry business but died of a heart attack in 1948.

There, Stefania married and had three children. Eventually, she moved to Canada, where one of her sons lived. She worked at a catering company and then at a luggage store.

In 2014, she went back to the Warsaw Zoo as part of the March of the Living.

She met Teresa, the Zabinskis’ daughter, and toured the basement she once called home.

There, hung on a wall, she found a copy of the picture of her parents from 1947 — the same one displayed in her cabinet in Toronto.

After the war, the Zabinskis had asked for the photo and put it in the room where her mother stayed to remember Stefania’s parents.