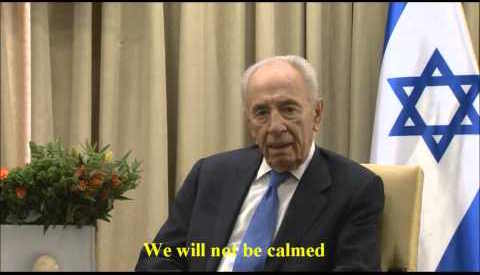 My friends: There are marches which are measured by the length of the journey. There are marches which are measured by time. You are on a march which cannot be compared. It is a march from the lowest point to the highest peak. The lowest point is the action of the Nazis – there was no atrocity like it in history. For us, six million brothers, sisters, girls and boys were murdered. Until this day when I see you before my eyes, the prayer shawls, the hair, the shoes of children and of adults that the Nazis stripped from the victims…

It is not a matter of remembering or forgetting, their blood flows in our veins, boils until this day. We will not be calmed. The distance is not that great – it happened 74 years ago. It is part of our biography not part of our history. Until this day we have not replaced what was taken from us, the Jewish nation today is smaller than it was before the war. The pain, the injury, the loss still exist. They live within us, we live what happened to them.

The picture became clear in 1945, on the day the war ended. In a short time, in three years, the greatest miracle occurred, the peak, the redemption of the Jewish people in the State of Israel. The State rose against all the expectations and all the norms – they didn’t believe.

In a desert, with hostility, with shortages, with opposition, with wars, again the Jewish people rose to unparalleled heights. From the lowest point to the peak there isn’t a distance – one is a result of the other. The bravery of Israel comes from the bravery of its founders. There flows the anger, the sorrow for what happened to us.

March! With your legs goes the whole nation. Lower your head in their memory, raise your head for the State of Israel. This is a March that has no comparison in any other nation, to any other situation.

Go in peace and return in peace. We will continue to remember the pain, and continue to build our country that did not lose its hope to heal the entire world. May you be blessed.