UN Exhibit to Honor March of the Living 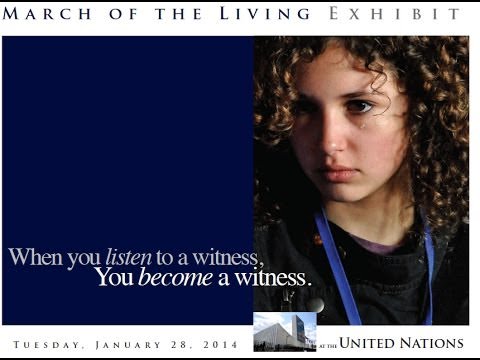 "When you listen to a witness, you become a witness"

On Tuesday, January 28th 2014, in the Visitor Centre, Dag Hammarskjold Library Lower Level, the United Nations will begin hosting the International March of the LivingExhibit: When You Listen to a Witness, You Become a Witness. The opening event and reception will take place that evening in the Library gallery from 6PM – 8PM, with Israel’s Ambassador to the UN, The Honorable Ron Prosser, as the keynote speaker.

The exhibit opening follows International Holocaust Remembrance Day, an annual day of commemoration established by the United Nations. When You Listen to a Witness, You Become a Witness will run through the end of February 2014. The exhibit is open to UN pass holders and for those who have pre-registered online for a UN Guided Tour from 10AM-5PM, Monday thru Friday. Additional private tours together with guest speakers can be arranged through the March of the Living offices.

When You Listen to a Witness, You Become a Witness features powerfully moving images and reflections in verse gleaned from 25 years of March of the Living, in color and black-and-white representations, documenting the stories of aging survivors and young students as they walk hand in hand participating in a life transforming journey.

The March of the Living is an annual program which brings high school students from around the world for a week of intensive education and touring in Poland and Israel, to study the history of the Holocaust and examine the roots of prejudice, intolerance and hate. Its aim is to impart the lessons of the Holocaust, celebrate the history of Jewish survival and instill a passion for social justice. The students visit once thriving sites of Jewish life and sites of mass murder and genocide in Poland. On Holocaust Remembrance Day – on April 28, 2014 – they will march from Auschwitz to Birkenau in memory of Nazi victims with survivors sharing their stories standing in the very places their tragic stories unfolded.

The UN exhibit ends with a “Guest Book.” Visitors are encouraged to write their own messages of hope and tolerance. These statements will be “taken” on the 2014 March of the Living, and placed on the grounds of Aushwitz to Birkenau along with the thousands of other plaques participants place there themselves.