Transformation in Poland By Raquel Binder, 2013 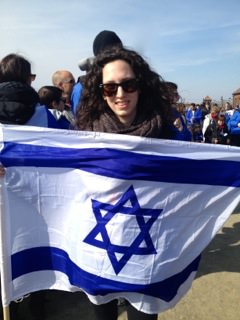 44 young professionals from across North America began the journey from Toronto to Poland to learn abut the Holocaust through The March of The Living. We were fortunate to have with us Holocaust survivor Pinchas Gutter as we learned about Jewish life before, during, and after the war.

I could not have predicted the impact this trip would have on my life.

I originally signed up for this trip for personal reasons. My Bubby (Grandmother in Yiddish) on my father's side is a Holocaust survivor who rarely spoke about it. As a Holocaust Educator myself, I felt a responsibility to fill in the gaps of my family story in order to have a more comprehensive understanding of history.

In the weeks leading up to the trip, my Bubby did share her story with me and I left for Poland with the mission of saying Kaddish (memorial prayer) for her sisters in Kielce. Coincidentally, my mother, maternal grandmother, and great-aunt were participating on the adult program, and it was very special to be able to share this experience. Upon arrival in Poland, we traveled to Warsaw. The weather plummeted to below zero and we stood outside in the middle of a snowstorm. This was a harsh yet poignant reminder of the conditions our ancestors survived through.

Each day consisted of a celebration of Jewish life coupled with a memorial of death, both Jewish and non-Jewish.

One day we began in a Tycochin synagogue where we sang, danced, and celebrated our presence. Next, we visited sites of mass graves and Treblinka (a death camp) where we saw the evidence of the murder of the Jews. At each site, we said Kaddish in an attempt to remember and provide an identity to those who perished. Pinchas, a survivor of Majdanek, told us pieces of his story throughout the trip and lead us through Majdanek.

Majdanek is truly a place of horror, death, and destruction and yet we were guided by Pinchas with a triumphant smile on his face. As sad, sick and disgusted as I was, I felt proud to be there with Pinchas. His life mission is to educate future generations in order to prevent atrocities from ever happening again. He is living proof that the Nazis did not win. He is proof of survival.

What was integral to this trip was sharing the experience with my peers. At night, the group stayed up late and had intense, intellectual conversations about the context of our experiences and what our responsibilities were as the 3rd generation. More importantly, we formed a strong community determined to protect the world around us.

A high point of the trip was the March of the Living on April 8, where we marched from Auschwitz to Birkenau in solidarity with 10,000 Jews from around the world. Arm-in-arm, we showed the world that, not only did the Jewish people survive, but we are very much so thriving today. Walking out of Auschwitz, I found myself at the bottom of a path leading out of the camp. This was literally the road to freedom and we were lucky enough to be leaving. On that path, walking in my bubby's footsteps, I felt an undeniable call to action.

Her story became my story. Her experience, and the experiences of everyone who suffered, became mine to understand and keep alive. At the end of the path lay the gates to freedom, and the key lay in my knowledge.

With this knowledge, I returned home to Toronto unfortunately unable to participate in the Israel portion of the trip. Despite this shorter program, I left Poland with a greater connection to Israel than I’ve ever felt before. Walking through the camps, synagogues, and memorial sites, we were constantly presented with Israeli flags and Magen David stars.

In one Warsaw church, I saw a sign in Hebrew saying “welcome to Warsaw, we love Israel.” As I toured the country and came face-to-face with the reality of Jewish struggles, the need and value of Israel became so much more important.

We, as Jews, will always have a home in Israel. We will be accepted and welcomed, and this was a goal for which our ancestors fought so hard to accomplish. As young professionals, we are in a unique and vital position to protect the future.

We are the last generation to have direct experiences with Holocaust survivors, and the first to have learned about Holocaust history and its impact on the future.

Our job is to keep their memories alive, to remember the past in order to protect the future.

As long as we live, and tell, then we can ensure that we never forget.