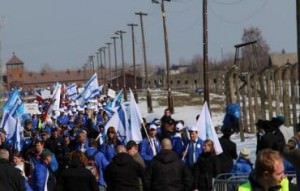 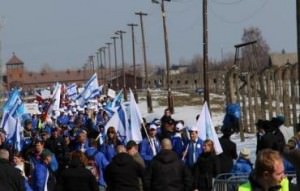 Hundreds of high school students from across the globe march from Auschwitz to Birkenau last year in an annual event sponsored by International March of the Living. Photo: COURTESY OF BATIA DORI

To mark the 70th anniversary of the mass deportation and murder of over 585,000 Hungarian Jews during World War II, hundreds of highschool students from across the globe will travel by train from Budapest to Auschwitz, where they will join 10,000 other students to march to the Birkenau extermination camp.

The four-day event, organized by International March of the Living to observe Holocaust Remembrance Day, will begin on Friday in Hungary, which is ranked among the most anti-Semitic nations in Europe.

In a show of unity to Jewish victims of the war, as well as present anti-Semitism afflicting his nation, Hungary’s President Janos Ader is scheduled to honor the memory of the Hungarian Jews killed in the Holocaust and proclaim his opposition to ongoing anti-Semitism.

International March of the Living’s chairman Shmuel Rosenman said he was heartened by Ader’s participation in the program, adding that the president’s responsibility will be to point out the profoundly indelible damage that the deportations and subsequent slaughter inflicted.

“The painful memories of such a tragic massacre should be harsh enough to have been ingrained within people worldwide that such unchecked hatred cannot go unnoticed, or be dismissed as just ‘the grumblings of a few,’” said Rosenman.

In a symbolic gesture to commemorate the once thriving Hungarian Jewish community, hundreds of young Jews from Budapest and around the world will gather in the capital on Saturday evening to travel by train to Auschwitz- Birkenau, where the vast majority of the nearly 600,000 victims never returned from.

President Shimon Peres has prepared a special message for the ceremony in Budapest, calling for tolerance and a global campaign against any kind of racism and neo-Nazism, Rosenman said.

Yoram Dori, media adviser for the event, said the train ride from Budapest to Auschwitz will be called “The Train of the Living” and “serve as a powerful testament to the great victory of the Jewish people [over] the Nazi animal.”

On Holocaust Remembrance Day, passengers of “The Train of the Living” will join survivors and thousands of other participants for the organization’s annual 3 km. march from Auschwitz to Birkenau, the largest and most notorious of the death camps.

A ceremony memorializing Hungarian Jewry and the six million Jews murdered, including 1.5 million children, will follow.

Rosenman said the march will honor the memory of Jews dehumanized and killed during Nazi Germany’s infamous death marches.

“This march, joined by thousands of teens, adults and survivors from around the world of diverse backgrounds, serves as a hopeful counterpoint to the experience of hundreds of thousands of Jews forced by the Nazis to cross vast expanses of European terrain under the harshest of conditions,” he said.

The International March of the Living is an annual educational program which brings students from all over the world to Poland to study the history of the Holocaust and the roots of prejudice, intolerance and hate.

Since its inception in 1988, the organization has sponsored over 200,000 youths from around the world who have marched down the same path leading from Auschwitz to Birkenau on Holocaust Remembrance Day.

“International March of the Living imparts the lessons of the Holocaust, celebrates the history of Jewish survival and instills a passion for social justice,” said Rosenman. “Youth from diverse religious and cultural backgrounds have participated in this life-transforming experience.”

Moreover, Rosenman said the experience of personally witnessing the horrors of world Jewry slaughtered during the Holocaust serves as an incomparably powerful educational tool. “Instead of learning just from books, the literal facts on the ground become their laboratory.”

Following commemorative ceremonies in Hungary and Poland, the students will fly to Israel, where they will honor Israel’s fallen soldiers during Remembrance Day and celebrate Independence Day.