Thousands join March of the Living from Auschwitz to Birkenau 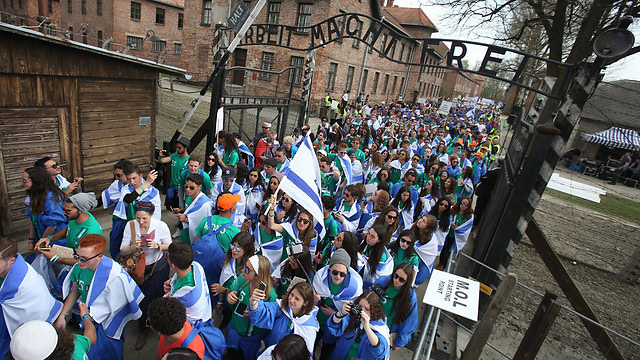 Annual event, now in its 27th year, includes delegations from 45 countries, each accompanied by a Holocaust survivor.

Thousands of people from around the world arrived in Poland on Thursday for the annual March of the Living walk from the Nazi death camp of Auschwitz to the nearby Birkenau camp, as part of Israel's Holocaust Remembrance Day. 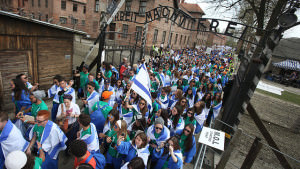 March of the Living in Auschwitz (Photo: EPA)

This year, people from more than 45 countries will take part in the event, with delegations from the United States, Canada, UK, Mexico, Panama, Greece, Australia, Morocco, France, Austria, Argentina, Brazil and South Africa. Each delegation was to be accompanied by a Holocaust survivor who was to tell their own personal story.

The marchers will work 3.2 km from Auschwitz to the nearby Birkenau camp. Following the two-hour march, a ceremony commemorating the victims of the Holocaust will take place.

"It's hard to say how many people are here," Yoram Dori, spokesman for the March of the Living, told Ynet ahead of the march. "But there are thousands here. At the head of the march, just like every year, will be Chairman of Yad Vashem and the Chief Rabbi of Tel Aviv, Rabbi Israel Meir Lau, himself a Holocaust survivor. He will be joined by dignitaries from Israel and abroad."

The march this year will mark 70 years to the end of World War II and the liberation of Auschwitz by the Red Army.

An Austrian delegation will join the marchers this year, led by Austrian Education Minister Gabriele Heinisch-Hosek. Other members of the Austrian delegation will include the Second President of the Austrian National Council, Karlheinz Kopf, the head of the Greens party, Dr. Eva Glawischnig, and Susanne Brandsteidl, Executive President of the Vienna Board of Education. They will be accompanied by 300 Austrian teenagers who are not Jewish.

"The Austrian delegation is here to show that the education system in the country has been teaching the lessons learned from the Holocaust and the Holocaust topic in general over the past few years," Dori said. "Yesterday, there was a ceremony in Krakow, where the Austrian education minister explained they feel an obligation to participate in the March of the Living. They introduced the topic of the Holocaust to their curriculum as part of the country's fight against anti-Semitism and racism."

The US administration sent its Ambassador to the UN Human Rights Council, Keith Harper, to the March of the Living. Harper is a Native American of the Cherokee Tribe and is considered close to President Barack Obama.

"Jewish teenagers from all over the world are taking part in the march," Dori said. "They come to Poland for a week for a tour of the extermination camps and other Jewish sites and then return to Israel, as a symbol of the transition from the Holocaust to the liberation, and see Israel's accomplishments, participate in a memorial service for IDF soldiers and then celebrate Independence Day with a march in Jerusalem."

"Those who have yet to see the joy on Independence Day of the teens who participated in the March of the Living a week before, have not seen true joy," Dori added. "You can see Jewish teenagers in the March of the Living wrapped in Israeli flags, looking inwards and sad as they're exposed for the first time to the shacks (in the camp), see the suitcases of Jews with their name tags, the Jews' shoes and other items, and you can't stay indifferent to that."