This is Our Legacy Gala: Celebrating 30 Years 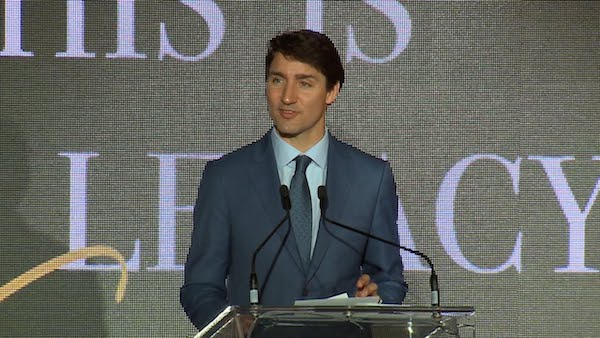 On May 8, 2018, March of the Living celebrated its 30th anniversary by honouring Holocaust survivors who have participated in the March since 1988 and its National Director, Eli Rubenstein, for his 30 years of service.

Prime Minister Justin Trudeau was the keynote speaker at the event. He thanked the survivors for their courage and contributions to Canada, as well as reaffirmed his government’s commitment to apologize for turning away the MS St. Louis from Canadian shores almost 80 years ago.

Over 100 Canadian Holocaust survivors have taken part in the March of the Living since its inception, with almost half of them from Toronto. March of the Living Scholarship funds were set up in the names of each Toronto survivor, and in honor of Eli Rubenstein, to ensure the future viability of the program

For 30 years, the March of the Living has engaged, impacted and changed the lives of more than 12,000 participants. From high school students, to young adults, to older adults and the remarkable survivor educators, the March has provided a powerful life-changing experience for all who have had the opportunity to participate.

The 30th Anniversary Gala celebrated the success of the March of the Living by securing the financial viability of Holocaust education travel programs for years to come, ensuring that the lessons of the Holocaust continue to be imparted to as many people as possible, and particularly our youth.

Our remarkable survivor educators have given selflessly of themselves to educate others, despite living through painful memories ignited by returning to the sights of the horrors they endured. In recognition of this extraordinary contribution to future generations, each survivor educator from Toronto was honoured with a Legacy Fund established in their name at the Jewish Foundation of Greater Toronto from the proceeds of the Gala.

Eli Rubenstein, a driving force and visionary leader, is the only person who has been involved in every March since its inception in Canada in 1988, received a Lifetime Achievement Award for his commitment and unceasing dedication to promoting and enhancing the March of the Living program. A Legacy Fund was also be established by the Ben & Hilda Katz Foundation from the Gala’s proceeds in Eli’s name to permanently recognize his contributions.