The Yom Hashoah that changed my life by Samantha Mellman 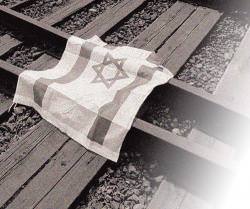 In the week preceding International Holocaust Remembrance Day, I went looking for my March of the Living journal. Stapled to the inside cover was a small slip of paper that bore the name Elka Sthul. Every participant’s journal had a different victim’s name attached to it, but mine, coincidentally, was from the same region of Czechoslovakia that my grandfather, Emanuel Moss, grew up in. Elka was six years old, a child incapable of causing anyone harm, but in May 1944 was killed in Auschwitz.

My grandfather survived the devastation and went on to live a blessed 91 years of life. He was a kind, gentle man, who gave no hint of the pain in his past. I am incredibly attached to my mother’s parents – my grandmother, Gisela Moss, is still with us – and they were married for 57 loving years. For people persecuted for their faith, they never strayed from following their religious traditions. They were adamant about keeping their customs and handing them down to their children and grandchildren.

In September 2014, my grandfather passed away after many years of battling cancer. During Thanksgiving, I went to my mother with an extraordinary idea. “We should go on the March of the Living this April,” I suggested.

For the past 25 years, the March of the Living has been a yearly pilgrimage for Jews from all over the world. For one week, thousands of Jews meet in Poland to take part in a symbolic march, starting on Yom Hashoah, Israel’s Holocaust Remembrance Day. Optimally, participants go on to spend an additional week in Israel.

My mother did not need any persuading, and so we began to arrange to participate in that year’s march.

We spent our time in Poland in and around the cities of Krakow and Warsaw. We learned the rich history of Polish Jewry before World War II, its decimation during the war, and its diaspora afterward.

When we walked in the streets of Krakow, and through the Jewish quarter, Kazimierz, we learned Jews once made up 25 percent of the city’s population. Today, there are only a thousand Jews living in the city. We passed by “Jewish” restaurants that were about as authentic as Disney’s Epcot World Showcase. The remaining temples in the quarter were beautiful, but some had been eroded by time and the lack of restoration. It was sadly apparent that the Jewish existence in Krakow could only be seen through empty temples, disheveled cemeteries, and parodies of Jewish restaurants.

In both Krakow and Warsaw, we visited areas where Jewish ghettos had existed. I touched the last remaining brick walls of the Warsaw ghetto, the site of the famous uprising against the Nazis.

On Yom Hashoah, upwards of 10,000 people lined up inside the gates of Auschwitz to begin our March of the Living. Toward the end of the Holocaust, the Nazis marched Jews for dozens of miles just for them to die. The march from Auschwitz to Birkenau is intended to remind us, and the people of the world, that Hitler and his army did not finish the job.

When the shofar blew, our walk began. We started between the brick barracks and continued out from the camp. I had never seen so many Jews together in one place. People were hand-in-hand, carrying hundreds of Israeli flags, while walking along the train tracks that lead into the entrance of Birkenau, less than a mile away.

A beautiful and heart-wrenching ceremony took place that day. After walking in the footsteps of those who died, I felt our being there had served as a comfort to the victims, a reassurance that the Jewish people still thrived and that the world had not forgotten their suffering. I felt all of us being there could somehow uplift the spirits of the victims. My grandfather’s mother and youngest siblings were all murdered right where I was standing.

By the end of our week in Poland, we had walked through Auschwitz-Birkenau; in and out of gas chambers at Treblinka; and saw a mountain of ash at Majdanek, which was, frankly, beyond my ability to process. A visit to these grim sites is not for everyone, but I encourage those with the time and means to trust their faith and go.

Every year, when I light a candle in memory of my grandfather’s family and the millions of Jews and non-Jews who were lost, I have the vivid recollections of the March of the Living with me.

Samantha Mellman is a freelance journalist in the Boston area.
Originally published HERE.