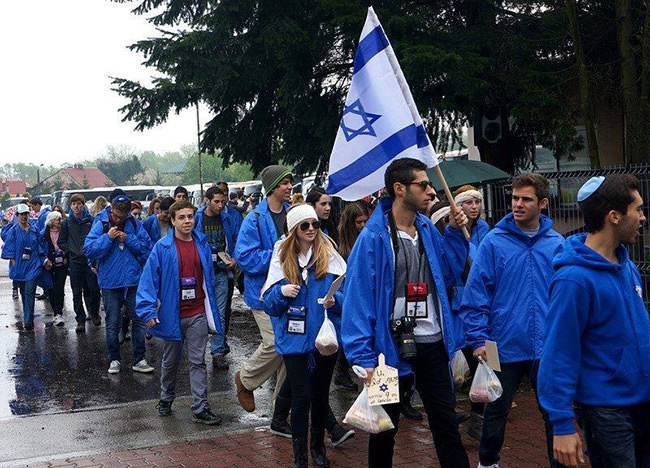 More than a quarter century after the founding of the March of the Living, an innovative Holocaust education program for high school students, its organizers are re-examining the iconic journey to Poland and Israel and adapting new ways to make it relevant for a new generation of young Jews.

“Kids are now more savvy and connected than the teens of 15 or 20 years ago,” said Morrie Siegel, Chair of Miami’s March of the Living program. “They’ve grown up with various messages about the Holocaust, and that exposure challenges us to engage them. We are the stewards of this phenomenal community Holocaust education effort, and our job is to set the table for these kids so they can take the experiences of the March and make them their own.”

Created in 1987 by educators and Holocaust survivors in Miami, the program today is known locally as the Leo Martin March of the Living (LMMOL), in memory of the Holocaust survivor and major benefactor who founded the Friends of the March of the Living. Local coordination of the March is administered by the Center for the Advancement of Jewish Education (CAJE), a subsidiary of the Greater Miami Jewish Federation. The educational journey begins in Miami with a series of training sessions, in which participants learn about the history of Poland and Israel, meet participating Holocaust survivors, and share their own family connections to the Holocaust. Then, the students travel to Poland, where they study the history of pre-war European Jewry and the Holocaust, and examine the roots of prejudice, intolerance and hate. The central impactful “March” of the program is a 3-kilometer walk from the site of the Nazis’ Auschwitz concentration camp to the Birkenau death camp in a silent tribute to all victims of the Holocaust. Since the first March of the Living, more than 250,000 youth from around the world have followed the same path. The Poland portion of the program reaches a crescendo at this ceremony, which demonstrates to the international community that the Jewish people are alive, strong and vibrant.

“The March of the Living is about actively entering history, rather than passively studying history,” said Rabbi Arnold Samlan, Executive Director of CAJE. “By visiting the death camps of Eastern Europe, participants undertake a commemorative act, which demonstrates to the world that the deaths of six million Jews and so many others will never be forgotten.”

One challenge for organizers, said Samlan, is the environment of Poland itself. Over the years, some of the historic sites have been sanitized and renovated, while others have been damaged or even destroyed.. Local residents have also become accustomed to the annual March and are less apt to be surprised by the influxof young Jews each year.

Today, the March is being made more relevant to young participants by emphasizing both the universally human as well as the particularly Jewish experiences of the Holocaust. Educators emphasize the individual obligation to never again allow discrimination directed by any individual or group against another to gain strength. Participants are inspired to commit to building a world free of oppression and intolerance, a world of freedom, democracy and justice for all of people.

The March is scheduled each year to coincide with Yom HaShoah (Holocaust Remembrance Day) while participants are in Poland. The second leg of the journey takes them to Israel, where they experience the centrality and historical importance of that country to the Jewish people, as well as its role as a modern safe haven for Jews fleeing oppression. After visiting Poland, observing Yom Hazikaron (Memorial Day) and celebrating Yom Ha’atzmaut (Independence Day) in Israel is dramatic and moving. LMMOL Manager Aley Sheer explained that this timing is intentional because it helps perpetuate the observance of both occasions in the minds of the March participants.

“The chapters of Jewish history that are best remembered are those that have been distinguished by events in the Jewish calendar,” said Sheer. “For example, we remember the slavery in Egypt because we celebrate Passover. The March of the Living experience creates memories that will last throughout the participants’ lifetimes, and will be directly connected withYom HaShoah, Yom Hazikaron and Yom Ha’atzmaut. These observances ensure that a new generation will remember and honor the lessons of the Holocaust and its aftermath for years to come.”

For Miami participants, Yom Hazikaron has been particularly poignant in recent years because they have spent the day in Yerucham, Miami’s partner city in the Negev region. The participants share the emotional occasion with teens and families from Yerucham, gaining a greater appreciation of sacrifices made to defend the State of Israel.

Since its inception, the March of the Living has been enhanced by the participation of Holocaust survivors who have accompanied participants on their journey and shared their memories of the inhumanity inflicted by the Nazis. Seven decades after the defeat of Nazi Germany and the liberation of the concentration camps, many Holocaust survivors have passed away and others are becoming too frail to make the trip.

“The survivors have been an irreplaceable asset to the March and have had a profound influence on our program and participants,” said Sheer. “There will come a time when they will be gone, but their testimony and influence will be maintained.” The March of the Living program has been recording the memories and insights of Holocaust survivors to preserve their poignant participation for the future, he said.

As the generation of survivors is passing, a goal for the March of the Living is to empower participants as the new advocates of the lessons of the Holocaust. The program’s organizers seek to imbue today’s teens with a sense of morality and fairness that comes from witnessing one of the bloodiest periods of oppression in human history. “We look to the young people who participate in the March to take up the message of the survivors and share that message with the world,” Sheer said. “As we get further in time from the Holocaust period, that mission becomes even more critical, and will preserve the spirit of the survivors into the future.”

Morrie Siegel pointed out that the costs of operating the March of the Living have escalated dramatically over the years, presenting still another challenge. Thanks to support from the Greater Miami Jewish Federation and the Friends of the March of the Living, the program is partially underwritten and can offer scholarships to participants.

The next March of the Living is scheduled to take place in April 2015 and registration is now open at http://www.caje-miami.org/mol. For more information, contact Aley Sheer of the Center for the Advancement of Jewish Education at 305-576-4030, ext. 143, or AleySheer@caje-miami.org.