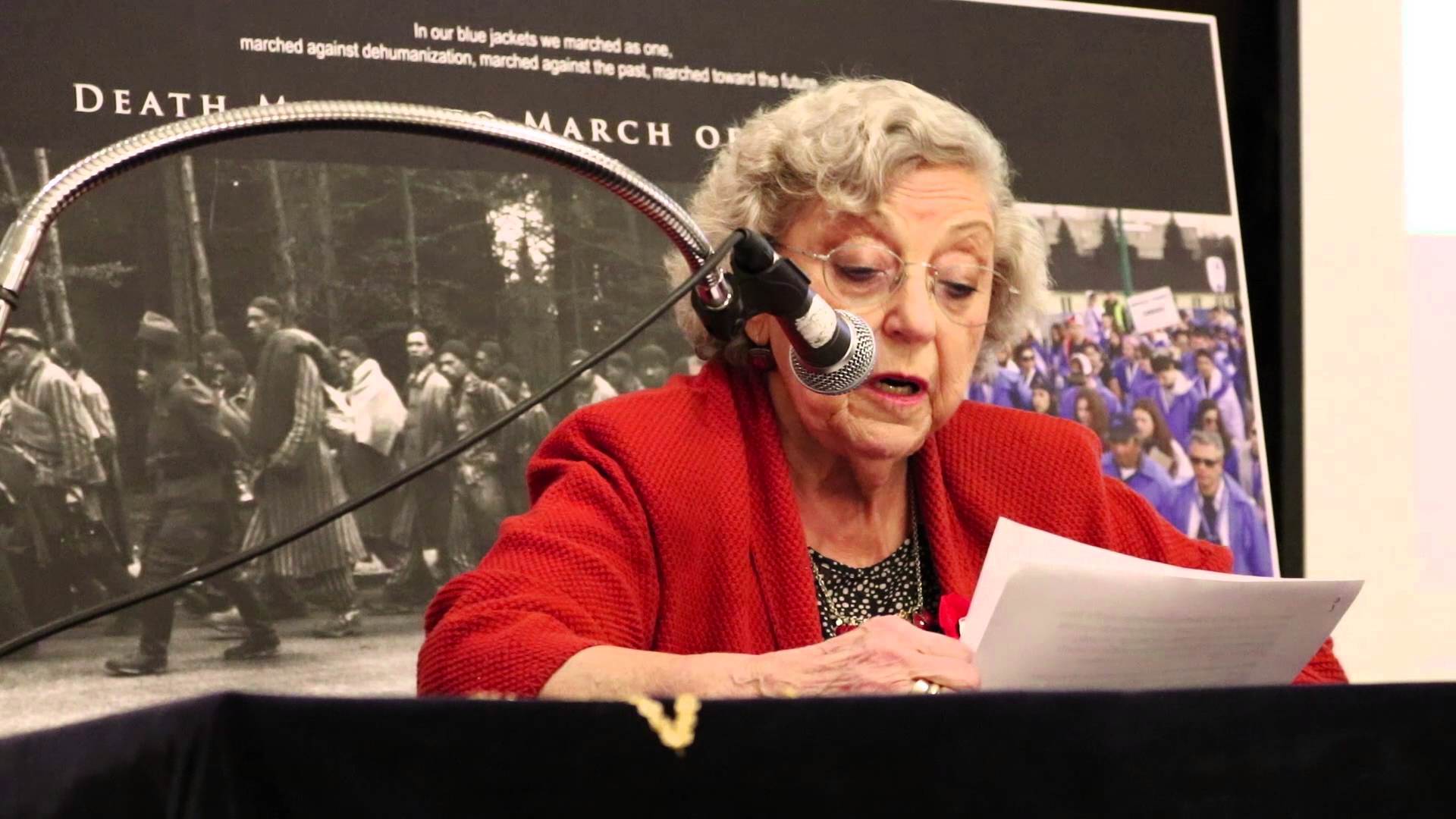 “My name is Judy (Weissenberg) Cohen. I was born and lived in Debrecen, Hungary with my large Orthodox family till I was 15 1/2 years old. We were seven siblings and my parents. I was the youngest. We lived quite comfortably, with other extended family members, in three separate dwellings, around a courtyard, with a huge iron door to separate us from the noisy street. The yard was full of my mother’s potted plants, the scent of which I can still smell in my dreams. This is where we always played. This was the eminently loving and safe world of my early childhood.

In the beginning of WWII, life for Jews in Hungary was not exactly a bed of roses, due to the multitude of anti-Jewish legislation and edicts under the Miklos Horthy regime. But our lives were not threatened. This uneasy calm was shattered on March 19, 1944. The German Nazis occupied Hungary and the Holocaust, with all its horrible ramifications, began for us Hungarian Jews. The pattern was the same as elsewhere in Nazi occupied Europe.

First we were forced to wear the Yellow Star, for specific identification purposes; then we were ghettoized to be isolated from the population at large; and finally, we, too, just like the rest of European Jewry, were driven from our homes, deported and delivered to one of the worst death-camps in Nazi-occupied Poland: Auschwitz-Birkenau.

450,000 Hungarian Jews were killed during the last ten months of the Holocaust.

Here my parents, Margit and Sandor, my 18 month old nephew Peter, with his mother Magda were immediately murdered in the gas-chambers. My three older sisters and myself were allowed to stay alive, for a while. Eventually we, the four sisters, Erzsebet, Klari, Eva and I, were separated during the terrible “selections” by Nazi doctors. After the last such “selection” I found myself totally alone, at the ripe old age of sixteen. I was then transported to another Nazi concentration camp called Bergen Belsen, in Germany proper.

I was devastated to be torn from my siblings and soon found out that in a death camp one should not be alone. I needed to know that someone cared whether I woke up in the morning or not. Thus, I asked the two Feig sisters, Edit and Sari, who I knew personally from Debrecen, if I could become their lagerschwester (camp sister). The answer was an unhesitating yes.

After a few weeks of stay and starvation in this camp, the three of us, along with 497 young women were taken to another camp to work in a Junkers airplane factory in Ashersleben, near Leipzig, in Germany.

Here we worked 12 hours a day as slaves. But both the barracks and food was much better than in the death camps. Here, survival was more of a possibility. Then sometime in mid April,1944, the American air force bombed the whole industrial complex around us, including the factory where we worked. After the total destruction of the factory, we had no work.

Two days after the bombardment, by the order of a high-ranking Nazi officer, we were ordered to leave the work camp and go on a forced march — to nowhere.

We marched endlessly and aimlessly — another special torture of the Nazis. There was absolutely no provision for us. Neither food, water, nor shelter, only two guards with their guns.

We marched back and forth on the highways of Nazi Germany. Likewise did the “Toten Commandos” of the SS in their black uniforms. They were hunting and shooting prisoners like us at random at night. We lived in constant fear for our miserable lives.

We were not alone. Groups, like ourselves, were marching or rather dragging themselves everywhere. The march lasted 10-12 days or was it two weeks? We had no calendar and after a while we stopped counting the days. We only knew that each day we were fewer and fewer. Some died of hunger, some of disease, some of total exhaustion and some by not wanting to live any more. They just fell by the wayside. I hope some managed to escape.

One day, we noticed something unusual on the other side of the highway. Another group of prisoners was marching in the opposite direction. They were all soldiers in uniforms who were being brutally flogged with long leather whips by their SS guards. Even we, by now rather accustomed to Nazi horrors, cringed at this sight. These men, who were supposed to be protected by the Geneva Convention, were all black soldiers in various uniforms who looked like they came from Africa. Some wore white turbans. (Now I know they were Sikh soldiers.) All of them had come from British Commonwealth countries to help Britain to defeat the Nazi enemy. They came from far and wide to help and die, if need be, so that the rest of the world will have a chance again to live decent lives in democracy.

My two camp sisters — Sari and Edith — and I were inseparable on this “journey”. To have friends who cared about each other made all the misery a little bit more bearable. We encouraged each other. We dragged or held up each other. Above all, we shared every little scrap of food, or anything that looked like food — rotten little potatoes or carrots dug up in the fields. We raided the garbage cans when marching through towns. Occasionally we dared to beg. Most of the times we were chased away but on a rare occasion German women would have pity on us. I remember once I was given a large slice of bread with marmalade on it, which the three of us scrupulously shared. Was that a feast!

Most of the time we had to sleep outdoors, in ditches or in small forests. As a result lice attached themselves to our bodies, especially in the armpits, where it was warm, and anywhere where hair grew, and even in the seams of our clothes. Lice were our constant companions. We must have been an awful sight to the ordinary observer. My “shoes” consisted of wooden soles with canvas tops that were in tatters. While we worked in the factory I could tie the top and bottom together with wire, like a muzzle on a dog. But on the road, my “contraption” was coming apart and my feet were a mass of bleeding flesh.

Was it April or was it already May? We didn’t know or care. By now, we were excruciatingly hungry, exhausted, dirty and utterly hopeless.

Our numbers dwindled to approximately 190-192 women at various stages of disintegration. We were the pitiful remnant of the 500 women who started out from Aschersleben. Our forced march turned into a death march.

I have absolutely no idea how I, along with the few others, survived. I cannot even remember everything. Our minds were clouded from starvation and hopelessness.

This particular night we happened to sleep in an abandoned, dirty stable. It had a roof and four walls and some damp straw on the earthen floor. After having slept outdoors for days this seemed like heaven, albeit a rotten one. The Mayor of this small town, the name of which escapes me, surprisingly, allowed us to use it.

On the next and memorable morning we were awakened from our fretful sleep by the Mayor himself. I vividly remember how he stood in the doorway of the stable. With bright sun light behind him all we could see was his dark silhouette. In a loud and not unpleasant voice he addressed us as “Freuleinen.” We looked at each other in disbelief. “Freuleinen” (?) and not “verfluchte Judin?” (Damned Jewess.)

We immediately understood this subtle change. Then he kindly explained to us that the war is coming to an end. “You are all free to go”. “Free? Did he really say free?” “You mean they won’t kill us?” “You mean this nightmare is truly over?” we asked each other. Our two guards had disappeared, so it must be true!

Once the message sank in we kissed and hugged each other with our parched lips and weak, skeletal arms.

“Please come outside and see all the white flags on every house. There is no fighting here anymore” he told us. (This was the last town in the area that was not yet liberated.) Once we were outside we saw white flags flying from every house. As I recall he showed us that the allied forces are closing in. The Russians were 10 km, and the Americans 6 km. away in the nearest towns. No matter how weak and hungry we were, we could still count. We looked at each other and agreed that 6 km. was the shorter distance. We turned in that direction and started to drag ourselves to meet the liberating forces instead of waiting for them. We learned that this day was Saturday, May 5th, 1945.

I remember very clearly, even today, that as we were walking very slowly, but with renewed hope, suddenly we came to a halt. We saw a huge truck of a peculiar and unfamiliar colour coming towards us. “What kind of colour is this?” We asked each other. “Could this be a new, hitherto unknown Nazi division?” We could not think in any other term. We stood there frozen with fear. The truck came nearer and nearer and finally stopped. Strange looking soldiers jumped off it and they looked at us in disbelief. First horror then pity on their faces. They never saw or could imagine people looking like we must have looked. It seems, we were the first survivors they encountered. They told us we have nothing to fear. “We are with the American Red Cross.” They reached into their pockets and started to give us chocolates and chewing gums. That’s all they had with them. They gently encouraged us to go on because Duben, the next town, was a short distance away and already liberated by the Americans. With renewed energy, we walked on. Hope was a marvelous elixir.

On May the 8th, 1945, the war officially ended. The military authorities came to take a look at us and tried to really help in any way they could, with regular and proper meals, and hospitalization for those who needed it.

Thus our physical and mental rehabilitation began: Not to be hungry or terrified any more; To sleep on a bed with clean crisp bed linen; To have a decent dress on our skinny bodies; To have shoes that really fit with no more bloody toes or heels. Mundane things to others but, to us then, utter luxury.

My emotional recovery started somewhat later and lasted for decades. That process was slow and painful as the enormity of my losses unfolded. Especially, when a couple of months later, in search of possible family members, I re-entered the once family home and found nothing but stark emptiness.

Still I was lucky because eventually I was reunited with my sister, Eva and my brother, Leslie.

The war and the Holocaust was over, but for us survivors it never really ended. The memories of a once wholesome but brutally shattered life will never fade.

On the other hand I am no longer a victim. I was given a chance to build a new, productive and happy life. I married Sidney Cohen and have two children, Michelle and Jonathan.

However, the struggle to keep this world safe, just, equitable and peaceful for all, is never ending. In my own, small way I am too trying to work for Tikkun Olam. Won’t you do the same?”

Toronto, Ontario
Participated on the March in 1998.