From 1939 to 1945, the German machine of destruction systematically killed six million Jews, including one million children. Poland, my native country, had a large Jewish population of approximately 3,011,000 before the Second World War. By 1945, 3,000,000 of these Jews had been murdered. Fifty years later, I still cannot forget the scenes of incredible brutality, torture and killing that my eyes witnessed. The same questions repeat themselves over and over again after all these years: Why? Why were so many people killed and why did the world choose to remain silent?

In 1993, I published the first edition of my book, Witness to Horror, fulfilling a promise I had made to my mother before German soldiers killed her. She had predicted that I would survive and had begged me to “tell the world what the beasts have done to us.” It had taken me all this time to bring myself to face the task of remembering and telling my story.

I was born and raised in the town of Vladimir Volynski, in Poland, where Jews had settled as early as the twelfth century. My father, Joshua, originally had been a teacher of Russian and my mother, Matilda, had been one of his students. Later my father could no longer earn his living teaching so my parents became merchants, selling coal and wood. My parents were able to provide an education for my brother Benny and me, an education that included Hebrew school, private high school and music lessons.

I was seventeen years old when the Germans invaded Poland. My father and my eighteen-year-old brother Benny were among the first group of Jews to be rounded up and then executed in the town prison. I saw my best friend Sarah being raped by German soldiers. As a result of this brutality she died.

The Germans killed my Zeide Aaron, my grandfather, who was a very pious, orthodox Jew. He was a role model to his children and grandchildren and taught us the blessings of nature, work, rest and the Sabbath. But my grandfather’s Jewish world, in which he believed that “God wanted a beautiful land where people could live and be happy,” was almost completely destroyed by the Holocaust. His world became a world of concentration camps, ghettos, and systematic mass murder.

Soon after the arrival of the German soldiers, the Jews of Vladimir Volynski were forced into a ghetto surrounded by barbed wire. Then the systematic killing began with the first of three Aktion, or killing operations. During the first Aktion, my husband Henry and my mother and I were hidden in the attic of a military dental clinic. A German dental technician, who was a friend of my husband, had agreed to let us hide there. This man, whose name was Hahn, risked his own life to save us.

The clinic was right across from the ghetto. Early one morning we heard terrible screams, and from a small window in the attic we saw the pogrom unfold. There were big trucks scattered around, and men wearing prayer shawls were being beaten with clubs and shoved into the trucks. With arms raised to the sky they were screaming, “Lama Hazavtonu?” (Why have You forsaken us?)

Mothers were screaming out loud, some clutching their babies and trying to hide them under their dresses. But the little children were grabbed by the Nazis and thrown into the trucks. Blood stained the ground and the children’s clothing. I covered my ears; I could not listen to the screaming any longer. Even today I still hear it in my dreams.

During the second Aktion, we were hidden in a stable and then in an attic by a Polish woman, Maria Wierzbovska. We stayed there for weeks until her husband discovered us. He was a bailiff and an anti-Semite, and when he discovered our presence he threatened to report us to the Gestapo. We were finally forced to go to the ghetto.

We were in the ghetto when the third and final pogrom broke out on 13 December 1943. This third Aktion was to accomplish the goal of making our town, Vladimir Volynski, Judenrein – cleansed of Jews. German soldiers overran the ghetto and shot Jews at random. Many were killed while trying to escape by climbing the barbed wire fence.
Miraculously, Henry and I found a cramped hiding place in the attic of a house, but we were separated from my mother. During the next few days we watched from our hiding place as German and Ukrainian soldiers searched the ghetto for any remaining Jews. To my horror one morning, I recognized my mother in a group of five people being dragged from a hiding place in a nearby house. The five were lined up against a wall and shot. I will never forget the image of the red blood staining the white snow. I saw my beloved mother die and there was nothing I could do. To even cry out would have endangered the lives of everyone in our hiding place in the attic.

In all, nineteen thousand Jews, including one thousand children, were killed in Vladimir Volynski. It was truly a miracle that Henry and I survived this third killing operation. But although we had managed to survive we still faced an enormously difficult road ahead. In March 1944, after escaping from the destroyed ghetto, we joined a group of Polish partisans. When it became obvious that the group did not want Jews, we ran away and headed on foot for the Russian front. Finally liberated by the Russian army, we were hungry, filthy, covered with lice and sores, and homeless. But our immediate reaction was one of joy. It was an incredible feeling to be able to go outside without being afraid for our lives, after years of hiding in attics, cellars and barns.

During the following three months we began to recover our health, and our first son, Mark, was born in Lwow. Our intention at this time was to get to Berlin. We made a stop in Krakow on our way, and to our great dismay we found ourselves in the middle of another pogrom. Polish neo-Nazis who were determined to kill the remaining Jews were conducting it. We managed to reach Berlin, but it was only to discover that we were stepping into an inferno. The Russian bombardment had put the city on fire and epidemics of dysentery and cholera were raging. Our son Mark took sick and we almost lost him.

From Berlin we went to Munich, where we applied for help from the United Nations Relief and Rehabilitation Administration (UNRRA), and then settled in Garmish, where our second son, Seymour was born. But even now, we were not free of the violent hatred of anti-Semites. A young girl we hired to help us in the house made an attempt to poison our son Mark. We found out later that she had been active in the Hitler Youth movement.
When we received our visa to come to Canada in the spring of 1948, we could not wait to leave behind us the war-torn and bloody soil of Europe. I will never forget the day we arrived in this country. We were greeted by a large sign saying WELCOME TO CANADA. Overwhelmed, we cried tears of joy.

We settled in Ste. Agathe, north of Montreal, and it was here that our daughter Heidi was born. Like many other survivors, we did not discuss the Holocaust with our children until they were older, and even then, not in any detail. It was still too painful. The wounds were too deep. They had not yet begun to heal.

In 1971, and again in 1982, I was invited by the German government to be a witness at Nazi war crimes trials. At one of these trials, Gebietskommisar Westerheide, the German regional commander who was in charge of the massacre of eighteen thousand Jews in my hometown, was tried and found not guilty. As far as I am concerned, this was the final injustice. Like many others, Westerheide maintained that he had not been in charge and that he had only followed orders.

Since publishing the first edition of my book, Witness to Horror, in 1993, I have told the story of my experiences during the Holocaust many times: at elementary and high schools; at colleges and universities; and at synagogues, libraries and various associations both in Canada and the United States. The book has made me a public speaker and launched me on my mission to preserve the memory of the Holocaust for succeeding generations.

In 1996, fifty years after leaving Poland during the aftermath of the Holocaust, I returned with my daughter to visit my native country.

From Ann Kazimirski's Essay
Montreal, Quebec
Participated on the March in 1997 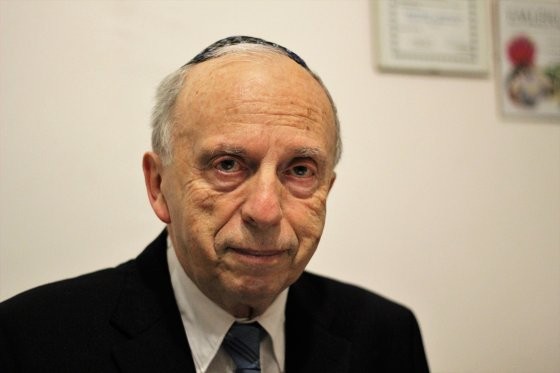