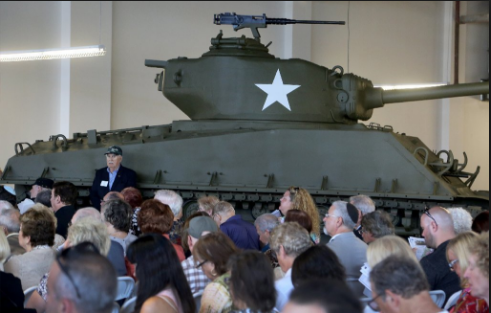 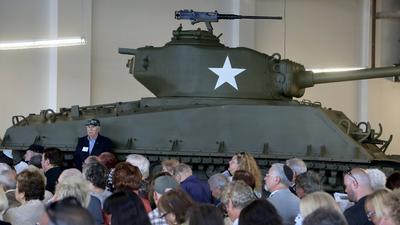 Holocaust survivor Josef Scher, 95, stands next to a Sherman tank used in combat during World War II. The tank was unveiled Friday at the Holocaust Documentation & Education Center in Dania Beach.(Mike Stocker/Sun Sentinel)

Two symbols of a war that rocked the world now sit in one room.

A Sherman tank used by American troops to liberate death camps during World War II was unveiled Friday at the Holocaust Documentation & Education Center. The 30-ton tank will serve as one of the museum’s anchor exhibits, along with a Holocaust-era rail car that ferried prisoners to their deaths.

“When I got here today, I went over and kissed that tank,” said Holocaust survivor Julius Eisenstein, 96, of Hallandale Beach. “I lost my whole family, my father, mother and three sisters in the war. They were ripped away from me in one minute.”

More than a dozen Holocaust survivors and liberators attended Friday’s unveiling, along with U.S. Sen. Bill Nelson, D-Florida, who helped acquire the tank from the U.S. Army’s Center for Military History.

“The tank is a symbol of triumph and freedom,” Nelson said. “It’s a symbol of those Americans and Allies pushing east across Europe – and a symbol of liberation of the camps.’

The tank had been on display at the Armor Museum at Fort Benning in Georgia before arriving at its new home two weeks ago. The Holocaust center, at 303 North Federal Highway, is not expected to open for another year, but plans to offer tours of the tank and boxcar by appointment Monday through Friday.

“This extraordinary anchor artifact symbolizes that memorable moment of liberation that every survivor and liberator we have interviewed tells us they will never forget,” said Rositta Kenigsberg, president of the center.

As a sergeant in the U.S. Army, Carl Arfa helped liberate a Nazi concentration camp in Leipzig, Germany in 1945.

“We came across a camp enclosed by barbed wire,” said Afra, 91, of Boca Raton. “The gates were open. We liberated 80 or 90 prisoners. They told me they were Jewish prisoners who’d been forced to work in a factory. They weren’t fed. The Nazis worked them until they died.”

For Arfa, the Sherman tank brought back memories of fighting in the Battle of the Bulge, a key battle that led to the end of the war.

“We were surrounded,” he said. “We had not eaten in three days. We were not going to give up. We would rather die.”

Arfa’s son, Barry, also of Boca Raton, said the sight of the imposing Sherman tank made him proud to be an American. But the rail car gave him chills.

“The horror of sitting next to it knowing people spent the last moments of their lives in there,” he said, tears streaming down his cheeks.

Restored to its wartime state, the rail car arrived by freighter from Poland in 2007. It is one of nine on display worldwide, Kenigsberg said.

For Eisenstein, the boxcar brought back a sorrow that will never heal.

“On one rail car, I scribbled my name and wrote ‘This is my last journey.’ I cry when I see that rail car.”

But the tank, he says, reminds him of the day the cavalry came.

Eisenstein says he looks forward to the day the museum opens so more people can learn about the war he can never forget.

The center has collected more than 6,000 photos and taken testimonials from 2,500 Holocaust survivors to help tell the story of Jewish life in Nazi Germany.