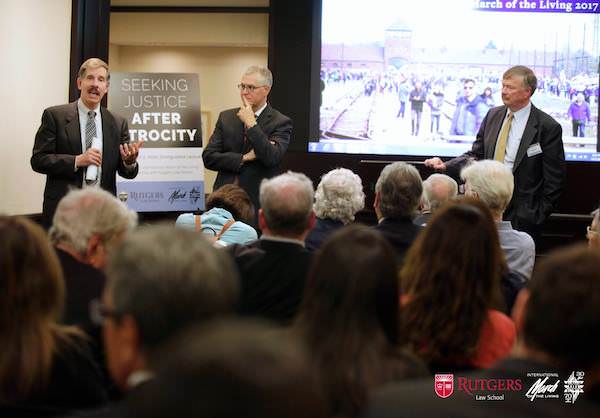 On Tuesday September 12, 2017 in New York, the International March of the Living, in partnership with Rutgers Law School, hosted The 2017 Paul S. Miller Distinguished Lecture “Seeking Justice After Atrocity” featuring presentations by John Q. Barrett and Eli M. Rosenbaum, followed by a video conversation specially produced for the program between John Q. Barrett and Justice Gabriel Bach. (Scroll down below photos to learn more the event and the presenters.)

The event, held at the law firm of Davis & Gilbert LLP, featured presentations by John Q. Barrett and Eli M. Rosenbaum, followed by video conversation specially produced for this program between Barrett and Justice Gabriel Bach.

John Q. Barrett is a professor of law at St. John’s University, as well as the biographer of the late U.S. Supreme Court Justice and Nuremberg prosecutor Robert H. Jackson.

Justice Gabriel Bach, Eichmann trial prosecutor and Israeli Supreme Court Justice (ret.), fled Nazi Germany at the age of 18. Two decades later, Bach, then a deputy state attorney in Israel, served as the deputy chief prosecutor of Adolf Eichmann, one of the principal architects of the Final Solution. The only surviving prosecutor of the 1961 trial in Jerusalem that captured headlines around the world and gave prominent voice to Holocaust survivors, Bach will share his recollections of prosecuting – and personally interacting with – ‘the man in the glass booth.’”

The evening was sponsored by Paul S. Miller, an alumnus of the Rutgers Law School class of 1962 and former Executive Vice President and General Counsel of Pfizer Inc., who said, “It is, at best, once-in-a-lifetime that one is fortunate enough to play a small part in enabling people to see and hear the giants of history.”

“Justice seems an impossible pursuit after an atrocity as monstrous as the Holocaust. In their recounting of the pursuit, capture, trial and execution of Adolph Eichmann, however Justice Bach, John Barrett, and Eli Rosenbaum have reminded us that pursuing justice after atrocity is nonetheless urgent and essential.” said John J. Farmer, Rutgers University Professor, Justice Alan B. Handler Scholar, Special Counsel to the President, and Director of Rutgers Faith-Based Communities Security Program.

About the International March of the Living

The International March of the Living is an annual educational program, bringing individuals from around the world to Poland and Israel to study the history of the Holocaust and to examine the roots of prejudice, intolerance and hatred. Since its inception in 1988, more than 260,000 alumni from 52 countries have marched down the same 3-kilometer path leading from Auschwitz to Birkenau on Holocaust Remembrance Day – Yom Hashoah – as a tribute to all victims of the Holocaust. Of those who have participated, over 60,000 were from non-Jewish backgrounds. One of the goals of the March of the Living is to teach students of various religions and ethnic backgrounds about the dangers of intolerance through the study of the Holocaust and other genocides and to promote better relations among people of diverse cultures.

The Paul S. Miller Lecture is made possible by Rutgers Law School alumnus Paul S. Miller, Class of 1962, and his wife, Carol. Each year the Miller Lecture features a major voice on such topical issues as balancing national security and individual liberties, the legacy of the civil rights movement, governing in a period of fiscal hardship, and healthcare reform and medical education. Paul Miller is a double degree graduate of Rutgers-Newark, having received his B.A. from the College of Arts and Sciences and his L.L.B. magna cum laude from Rutgers Law School. Born to immigrant parents with limited education and few resources, Miller rose to the top of his profession, becoming executive vice president and general counsel for Pfizer Inc. Miller was a key contributor to the outstanding reputation of the corporation’s law department and board of directors. Paul and Carol Miller also generously support a full-tuition scholarship and funding for expanding international opportunities and policy research at Rutgers Law School, including the Rutgers Faith-Based Communities Security Program.

The Rutgers Faith-Based Communities Security Program was launched in May 2014 in the wake of a lethal terrorist attack on the Jewish Museum in Brussels. It was founded by Paul S. Miller and John Farmer, former Dean of Rutgers Law School and current University Professor on the faculty at the Rutgers Eagleton Institute of Politics, in recognition of a rising tide of anti-Semitism in Europe and America and of intolerance generally. The reality that almost a billion people now live in countries where they were not born, coupled with the continued struggles of historic minority populations, mean that we live as never before in a world of vulnerable populations.   Events since the inception of the program – terrorist attacks in public settings such as stadiums, cafes, subway stations and airports, desecration of religiously affiliated buildings, schools and homes, and mass killings in churches, mosques, temples, and synagogues — have, if anything, served to underscore both the vulnerabilities of certain populations and the growing levels of violence – verging, in some cases, on outright genocide — directed at them.