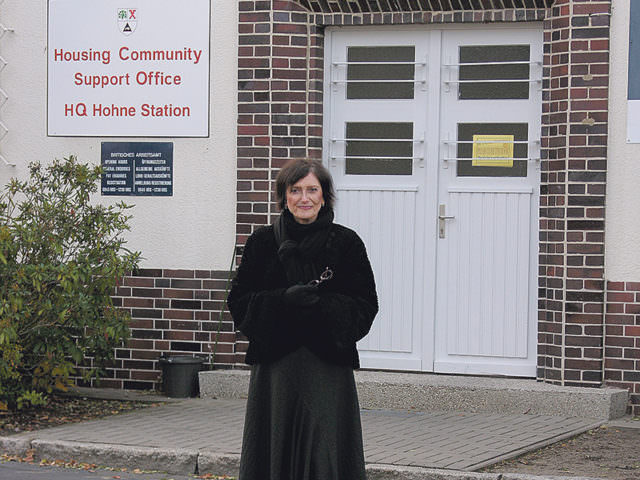 Karen Lasky in front of the hospital in the displaced persons camp where she was born.

Marilyn Sinclair stood in front of a packed Toronto conference room a few weeks ago and told the 200 people gathered there, “We were the children with no grandparents. We had walls with no family pictures.” By the time she got to “we secretly wished we had parents who wore blue jeans, who didn’t have an accent, who didn’t worry about us all the time,” a chuckle of recognition rippled through the group of middle-aged men and women.

Everyone in the room was a child of Holocaust survivors. Whether they were born in a displaced persons camp at war’s end or 20 years later into a comfortable suburban home, Sinclair’s remarks hit home.

“We share memories of trauma from events that we didn’t even experience,” Sinclair said, kicking off a day-long seminar for the second generation, or “2Gs,” as they call themselves.

But despite their sometimes difficult childhoods, Sinclair also reminded the group that they had parents whose lives demonstrated “strength, resilience and gratitude to Canada.”

Reconciling growing up with immigrant parents who carried unimaginable burdens with the need to make sure their parents’ stories are not forgotten is the legacy of the 2Gs.

The conference, titled Dialogue For Descendants, was the first one organized for the second generation in Toronto in many years, and it sold out days in advance. Attendees showed up an hour before the event and just started to connect with each other, said Dori Rawa Ekstein, co-chair of the conference along with Sinclair. Carleton University’s Holocaust Centre for Education and Scholarship was so interested in the conference that it organized a similar meeting in Ottawa a few days earlier, which also sold out, featuring most of the same speakers.

About 40,000 Holocaust survivors came to Canada after the war. As that generation dwindles, their children feel an increasing sense of urgency to preserve and transmit their families’ history, said Paula David, the keynote speaker who teaches gerontology at the University of Toronto’s school of social work and has spent her career working with Holocaust survivors, their families and caregivers. Her husband is also a child of survivors, so when David addresses the group, she is also talking about her own family.

“Children want to know their story and where they come from, and you don’t [know],” she said to the attendees. “As long as you had parents alive, you had a story, even if they didn’t want to talk about it… Once they’re gone, you have no story.”

Survivor parents “knew what they lost, but probably they didn’t have the words to tell you. They learned to live with their burden,” David told the group over lunch in a talk that had some listeners wiping tears from their eyes. “My guess is your burden is going to keep growing.”

Karen Lasky, who attended the Toronto conference, inherited her parents’ burdens even before she was born in a displaced persons camp a few kilometres from Bergen-Belsen. She was raised by parents who survived Auschwitz and were deeply traumatized, but told her little about their own experiences.

“I grew up in a silent home,” she said. Her father suffered mental breakdowns, and, as a child, she saw him being taken away in restraints to hospital, without ever understanding what was happening.

About a decade ago, she went on an adult March of the Living trip to Poland and began to uncover her own heritage. A year after that trip, she returned to Poland and found information about her parents’ siblings and their homes. The trip was a “rebirth,” she said.

“I grew up thinking there was nothing left. They lost their entire families,” she said. “I found everything to tell me who I was. Without that knowledge, I was incomplete.”

When she returned to Toronto, Lasky became involved with Holocaust Education Week and helping others of the second generation uncover their past.

“It’s our legacy. The story didn’t end with our survivors. We’re going to continue it.”

While some families kept silent in a well-intentioned, but misguided, attempt to protect their children, others told their children too much, David said. “They told them everything, in the hope they would avoid it forever and forever, and that is an enormous burden for a child,” she said.

Ekstein, who was born in Toronto about two decades after the war, grew up hearing about the Holocaust from her earliest years.

“Sometimes, it was embarrassing,” she said, such as when her father felt compelled to tell a boyfriend picking her up about his experiences in Auschwitz and show him the number tattooed on his arm.

“I recognize now, as an adult, it was this overwhelming urge, it was this moral obligation, to tell the whole world,” Ekstein said.

As children, the second generation also tended to be very protective of their parents. “I felt like I have to be a good girl. I was never the child who caused trouble, because I already felt like my dad had so much pain,” she said. “I was a pleaser, which is part of my personality… because I didn’t want my dad to be upset.”

By the time she was a teenager, Ekstein was attending Holocaust education programs with her parents. But the turning point was going on the March of the Living trip as a chaperone, after which she decided to make Holocaust education “her life’s passion.”

She and co-chair Sinclair hope the Toronto conference will be the first of many projects for the 2Gs that will help them make sense of their families’ story and continue their parents’ testimony.

It was this desire to understand their parents and the families they created that motivated Henry and Deborah Ross-Grayman to become involved in Vancouver’s Second Generation Group and other Holocaust-related activities. In fact, the couple met in the group, where Deborah was a facilitator for many years, and they use a combined surname to “create our own new family, as we have so few family members coming out of the Holocaust,” Henry said.

Deborah, an only child, was raised by a single mother who didn’t speak English and who, she recalls, was “filled with anxiety.”

“I didn’t really understand what it meant to be second generation. I wasn’t part of a Jewish community. I just thought my mother was my mother. I didn’t understand the historical context and also that there were other people like me who had similar challenges and experiences,” Deborah said.

An unusually large number of children of survivors have gravitated to the “helping professions,” as social workers, doctors, teachers and others, Henry pointed out. Both of the Ross-Graymans are therapists.

His father endured nine concentration camps, and his father’s first wife and children, who went into hiding, were betrayed and died in the Holocaust. His mother survived by hiding in a convent.

His parents remained plagued by anxiety and insecurity after the war, and some of that trauma was transmitted to him, he said.

Deborah’s mother spent the war years on the run, fleeing her home in Poland and travelling across Russia to find a haven first in Japan and then Shanghai. Despite her mother’s frustrations and difficulties, she also gave Deborah a gift, she said.

“My mother gave me this visceral sense of not taking my life for granted,” she said. “I feel that I’m sensitized to oppression and racism and bigotry. I feel I have a deep sense of compassion and empathy for all victims of genocide and their descendants.”

The couple, and Vancouver’s Second Generation Group, are involved with the Wallenberg-Sugihara Civil Courage Society, which perpetuates the memory of diplomats Raoul Wallenberg (Sweden) and Chiune Sugihara (Japan), who provided life-saving visas for Jews fleeing Europe. Deborah’s mother received a visa from Sugihara.

The society also recognizes contemporary individuals who have taken great personal risks to protect the human rights of others.

The Second Generation Group has also met several times with aboriginal survivors of residential schools and their descendants. “We’ve shared stories and shared experiences with them. It’s really been very meaningful to hear their stories and for them to hear our stories,” Henry said.

As the Vancouver group ages, its members seem to want to meet more frequently, Deborah has noticed.

“Many of our parents have already died. We are now coming up as the next generation. There’s a desire to reconnect and share our experiences,”she said.

“We’re also looking at what kind of legacy are we leaving behind,” Henry said.

He and his wife look at the rising tide of intolerance in the United States, unleashed by the recent presidential election campaign, and feel their parents’ old fears creeping up again.

There is also the worry that the personal stories of the Holocaust will be lost, Paula David observed. Some parents are concerned that their children are not interested enough in their grandparents’ experiences.

“Rest assured, we have strong evidence someone will tell the story,” she said.

David believes, however, that the third generation is the best equipped to share the lessons of the Holocaust. Unlike their own parents, they grew up securely as Canadians, surrounded by cousins and extended family.

“Children need family history, and you have to be brave enough to tell the family story,” David told the Toronto 2Gs. “Anyone who survived and had a family, they’re a hero. How you tell the story is up to you.”