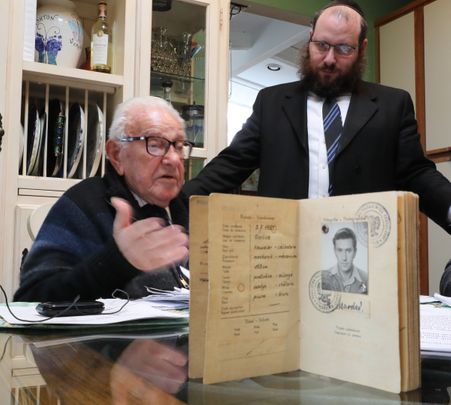 Tuesday was an emotional day for Michael Marder, a 93-year-old Holocaust survivor.

The Airmont resident lit the menorah at the the parking lot at the Tallman ShopRite to celebrate Hanukkah.

Rabbi Shmuel Gancz, who was with him, said this week’s lighting was special.

“It was a whole new meaning and experience for me,” he said.

It was just another step in a winding journey for the sharp and energetic Marder, who cheated death and survived the hardships of nine different concentration camps.

The details are difficult to hear.

For example, in 1944, Marder and a friend, who had become ill, planned to escape from the German death camp, Bergen-Belsen.

“We wouldn’t have survived,” Marder told The Journal News/lohud from his Rockland County home. “The conditions in Bergen-Belsen were horrible. The camp was filthy and overcrowded. It was worse than Auschwitz. People were dying, right and left, every day.

“I was covered in bugs and plucking the lice from my skin and cracking them in between my nails,” Marder said. “People were eating the livers from the dead bodies.”

By the time he got to Bergen-Belsen, Marder had already cheated death at several camps since being ripped away as a 16-year-old from his family in Ulanow, Poland, by the Germans in 1941.

He said the Germans needed 100 males capable of doing work and went door to door looking for them. He and 99 others were forced into a horse-drawn buggy and taken to the Janiszow concentration camp in Poland.

He never saw his brothers, mother or grandparents again.

“When we got to Janiszow, the commander made a speech. (He said) ‘You came here to work,’ ” Marder recounted. :Don’t get any ideas of running away because for each one who runs away, 10 will be shot.’ And he took out one boy from the group and shot him on the spot.

In Janiszow, Marder built dikes to prevent a river from overflowing into farms.

“Every day, every morning, we went to work, and they were hitting us,” Marder said of his captors. “You were in the sun for seven hours daily, and it created blisters on our bodies. When they hit them, the blisters exploded.”

In 1942, an escapee from Janiszow returned to free his fellow Jews and exact his revenge. But options were limited.

“Where can you go?” Marder said of the escape attempt. “You can’t go back to your hometown, because they took all the men, women and children to the cemetery.”

The runaways were ultimately hunted down; 18 survived, including Marder, who was sent back to the camp.

After Janiszow, he was sent to the Budzyn camp in Poland to repair damaged planes and tend to sick prisoners after he recovered from scarlet fever.

“I had to report how many were still alive and how many died overnight,” Marder said. “One day, (a German) came in and said, ‘Didn’t I see this man yesterday?’ I said, ‘Yes, he’ll get better and then he’ll go back to work.’ “

Instead, “He ordered a stretcher and took the man … and threw him into the giant fire burning in the back,” Marder said. “Then (the German) told the watchmen to come down and shoot him, but he was already dead.”

With the Soviet army moving in, the camp was liquidated and Marder was shipped to Radom in Poland to work in an ammunition factory. But his stay wasn’t long; Within four months, with the Soviets close again, the Germans abolished that camp and sent Marder on foot to the Polish city of Tomaszów Mazowiecki and then shipped him to Auschwitz.

There, Marder — deemed capable of work — avoided the gas chambers and was then sent to the adjacent camps, Bisingen and Vaihingen, in Germany, where he considered jumping to his death while mining rocks in a quarry.

“The work was very hard, and there were many times I thought of killing myself. I wanted to jump from the high ledge into the mine,” he said. “But some inexplicable faith compelled me to keep on, keep working and remain alive.”

He did just that, eventually being sent to the notorious Bergen-Belsen, where he was forced to collect the bodies of dead Jews in a wheelbarrow and dump them in a pit behind the concentration camp.

But in 1944, when his friend got sick, the pair realized they needed to escape. So one night, they slipped under a non-electrical fence and into another camp.

If the guards there discovered two extra people during roll call the next morning, Marder and his friend would’ve been killed.

“I said to my friend, ‘Here, we’re going to be shot. They’re going to say, ‘Where did they come from?’ ” Marder said. “But, fortunately, (the guards) didn’t count. They put us in a line, cut it half and said, ‘Half are going to work in the shipyard.’ “

Marder was sent to Bremerhaven in Germany, where he worked as a welder in the shipyard. There, he said, there was at least one instance when about 1,000 Jews were crammed onto a rusty ship, which was towed out to the ocean and detonated.

“I was working in the shipyard, and went down to the bottom of a (different) ship in hiding,” Marder said.

In 1945, the Germans sent Marder back to Bergen-Belsen, where he spent another four months before he was freed by the British.

“I was sick. I was a skeleton,” Marder said. “They took me into the British hospital, and I was with them for about two months and then the Swedish Red Cross came.”

He was sent to Sweden to recover and lived there for about five years before moving to Brooklyn to live with an aunt and uncle.

In 1963, he moved to Rockland, sent his children to yeshiva, attended synagogue and celebrated the Jewish holidays with his family, which now includes two children, nine grandchildren and 11 great grandchildren (and a 12th due April 1).

“I fought the Angel of Death in nine different death camps,” Marder said. “I thank you God who had spared my life and enabled me to be here.”

He said I “hope and pray things like this will never happen again. Never again.”

At the menorah lighting Tuesday, Gancz said Marder was one of the lamed vav tzadikim. Rooted in mystical Judiasim, they are 36 righteous people believed to be chosen to support the substance of the world.

“Michael (Marder), I’m in awe of your strong conviction in Judaism, where you went through so much,” the rabbi said. 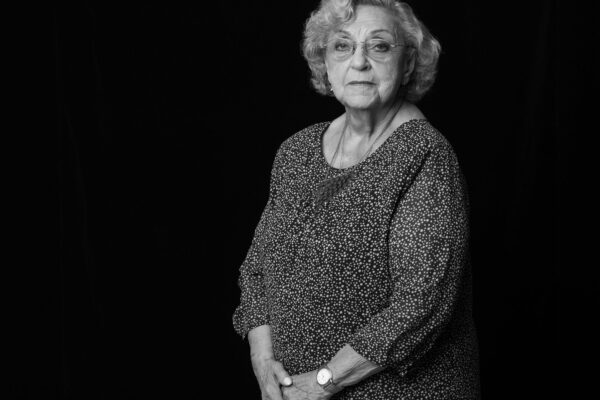 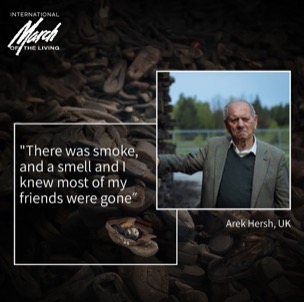