RIVLIN TO LEAD 2018 MARCH OF THE LIVING 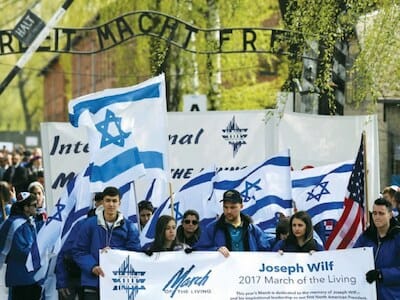 March of the Living participants outside the gates of Auschwitz. (photo credit: AGENJCA GAZETA/ REUTERS)

Although he frequently makes the point that the founding of the State of Israel was not by way of compensation for the Holocaust, President Reuven Rivlin will have a more difficult time than usual in presenting this argument when he leads the 30th-anniversary March of the Living on April 12, 2018.

The 3-km. march along the railway track from Auschwitz to Birkenau is traditionally held on Holocaust Remembrance Day, which is always a week ahead of Independence Day, when many of the participants, in the spirit of the March of the Living, come to Israel to celebrate the revival of a people reduced to ashes.

Before and after the march, participants visit death camps and concentration camps, as well as places where Jewish communities once flourished, and learn the history of Jewish Poland.

Although there had been uprisings in other ghettos since 1941, the Warsaw uprising was the largest single revolt and armed struggle against the Nazis by Jews, aided in part by Polish resistance fighters who helped to smuggle weapons into the ghetto.

This will be the second time for Rivlin to lead the March of the Living. The first was in 2003, during his first term as speaker of the Knesset. When the president is overseas or incapacitated for whatever reason, the speaker becomes acting president.

Thus, when president Moshe Katsav suspended himself from office during the last three months of his term while preparing for his trial, Dalia Itzik, who was then Knesset speaker, became the acting president.

March of the Living was founded in 1988 by Avraham Hirschson and Dr. Shmuel Rosenman.

Curiously, the Israeli-born Hirschson, in an interview with The Jerusalem Post in the period in which he was still active in the organization, said that he had no family connections with the Holocaust.

Rosenman, who is the chairman of the International March of the Living, believes it to be an important educational program which brings together youth and adults from around the world – not all of them Jewish – to learn about Holocaust history and, by their presence, to symbolize the opposite of the death marches forced upon Jewish prisoners by the Nazis.

Whereas the people in the marches were weak from hunger and slave labor and trudged along, often falling in their tracks, participants in the March of the Living walk proudly and confidently, with heads held high.

Over the past 29 years, the international March of the Living has attracted more than 260,000 participants from 52 states and countries, including actual Holocaust survivors and members of their families.

The most famous and most constant of these has been chairman of the Yad Vashem Council, Tel Aviv Chief Rabbi and former Ashkenazi chief rabbi Yisrael Meir Lau, 80, who was a child Holocaust survivor.

One of the symbols of Auschwitz is the number indelibly tattooed on the arm. Few people who have such a tattoo make any effort to hide it. It has become a symbol of survival, whereas it was originally a mark of dehumanization.

In view of the increasing revival of antisemitism in Europe and elsewhere, Rosenman believes that the 30th anniversary March of the Living is more important than ever, and is proud that it will be led by Rivlin.

In a statement he issued Sunday announcing that he will lead the march, the president said: “Every one of us has a number on his arm – but not from Auschwitz. Although we come to Auschwitz, it is not to Auschwitz that we are marching together in the March of the Living – young people, senior army officers, soldiers, community leaders and Holocaust survivors. This is a great step in the history of the Jewish people, a people that was weaned on the memory of its roots, but remembers its sons and daughters and marches with confidence and pride toward the future.”