Remarks by Ron Dermer, Israel’s Amb. to the US, at 2018 Erev Yom Hashoah Ceremony at the Krakow Philharmonic 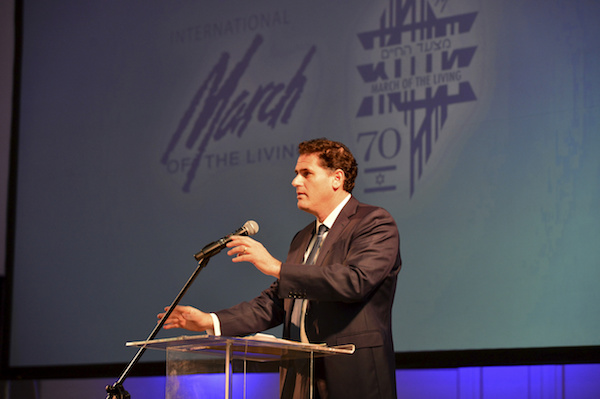 “Ladies and Gentlemen, and especially the survivors and their families who are with us here tonight,

This week, my wife Rhoda and I joined Phyllis and Richard Heideman on a remarkable March-of-the-Living journey.

Our guide has been their extraordinary daughter, Dr. Elana Heideman, whose knowledge of the Holocaust is matched only by her passion to educate others about it.

On Monday, we walked through endless rows of graves at the Jewish cemetery in Warsaw, where some 200,000 tombstones bear witness to our people’s eight-century long history in this land.

We visited the site of Janusz Korczak’s orphanage, and learned about the courage and dignity of this incredible man who refused to abandon the children to save his own life, choosing instead to die alongside them in the gas chambers.

We sat at the Umschlagplatz, the square where over 300,000 of Warsaw’s Jews spent their final hours before being shipped off to the death camps.

And we stood atop Mila 18, where the brave fighters of the Warsaw Ghetto made their final stand against the Nazis, defying an indifferent world with three powerful words, We Are Here!

Yesterday, we visited a beautiful, centuries-old synagogue in the village of Tikocin, and went into the nearby forest to stand by the pits where the town’s 2,800 Jews were murdered by the Einsatzgruppen.

Then we went to Treblinka and walked in a field where thousands of stones mark the site where some 900,000 Jews were once gassed to death.

This morning we went to Majdanek, the labor and extermination camp that stood intact at the end of the war. We saw the gas chambers, the barrack filled with shoes and the enormous mound of ash outside the crematoria.

And tonight, we join you in this magnificent hall in Krakow for this moving program on the evening of Yom Hashoa, when tomorrow we will March together to Auschwitz.

It has been a march to remember our people’s dispossession, deprivation, and desperation, to remember the individuals behind the statistics and the faces behind the numbers – the mothers and fathers whose families were wiped out, the sisters and brothers separated from their loved ones forever, the boys and girls, toddlers and infants, who never had a chance to grow up.

It has been a march to remember that the Holocaust was not perpetrated by aliens on another planet, but by real people in the real world.

It has been a march to remember the most important lesson of the Holocaust – that the Jewish people must never be powerless against their enemies or rely on others to defend them.

And it has been a march to remember the uniqueness of the Holocaust.

The scale of the Holocaust is hard to fathom. Tomorrow, as we march 13,000 strong, consider this:

More than three times that many Jews were killed in a single day in Majdanek in November 1943. And more Jews than that were killed nearly every day in Auschwitz in May 1944.

And if 6 million is a hard number to wrap your mind around, consider this as well: In 30 years, nearly 300,000 people have been on March of the Living – an average of 10,000 a year which is a remarkable number by any measure.

Yet even at that pace, it would take the March of the Living 600 years to bring a single marcher for every Jew murdered in the Holocaust.

But it is not the scale of the Holocaust that differentiates it from the genocides, mass murders and other man-made horrors that stain human history.

What makes the Holocaust unique is that all Jews were targeted for annihilation, that this diabolical crime was systematically planned and methodically executed, and that the Holocaust was not merely a means to an end but an end in itself.

And what is unique about the Holocaust is also the unique hatred that fueled it. For centuries in Europe, Jew hatred was a powder keg waiting to explode.

It exploded in the Rhineland during the Crusades and in Basel, Mainz and elsewhere during the Black Plague.

It exploded in 15th century Spain during the Inquisition and in 17th century Ukraine under Chmielnicki.

It exploded through the pens of great intellectuals like Voltaire and Ezra Pound and through the clubs and pitchforks of murderous mobs that always hung like a Damocles Sword above the heads of Jewish communities in ghettos and shtetls across Europe.

And it exploded in the Dreyfus Trial in Paris, convincing a young Theodore Herzl, a half century before the Holocaust, that this hatred demanded that the Jewish people establish a Jewish state.

In this March of Memory, we must remember that the Holocaust is not merely another chapter in the story of man’s inhumanity to man.

The Holocaust is the worst chapter in the story of man’s inhumanity to Jews.

That story is a story of a hatred so old and ubiquitous that it has transcended time and space and so malleable that it has afflicted so many different cultures and civilizations and been adopted by so many disparate ideologies and identities.

What makes the long night of the Holocaust so different that so many other nights of Jew-hatred is that during the Holocaust, a would-be master race was executing a master plan that harnessed that age-old hatred to a modern industrial killing machine.

And during that long, dark night, the Jewish people were utterly powerless.

This March of the Living has been a march of defiance for me as well.

It has been a chance to defy all of the Nazis’ willing executioners throughout Europe who eagerly joined in the bloodlust.

The Nazis did not perpetrate their crimes alone. Thousands were needed to man the machinery of mass death. Thousands enthusiastically took up the task.

And ladies and gentleman, this year’s march is also a chance to defy a law that should never have been passed – a law which brings shame to a proud nation that can take pride in so much of its conduct during World War II.

The Polish government, unlike other occupied governments in Europe, did not collaborate with the Nazis.

The Polish resistance fought the Nazis with great courage and fierce determination.

And the Polish people can proudly boast of having more Righteous Among the Nations than any other people.

Given this record, the Polish state today is right to be upset with those who, either through malice or ignorance, mistakenly hold Poland collectively responsible for the crimes of the Nazis.

The Polish state is right to be upset not only because this is libelous but because the Polish people themselves suffered terribly during World War II. Millions of Poles were victims of the German war machine.

But this law is not the answer. Burying the truth is never the answer.

And this law will not silence a Jewish people that refuses to be silenced again.

This law will not prevent us from speaking of Jedwabne or Kielce.

It will not prevent us from speaking of those who hunted hidden Jews or who turned in their neighbors.

This law will not prevent us from exposing the crimes of the individual Poles who are responsible for murdering Jews during the Holocaust.
Ladies and Gentlemen,

I am a guest in this country, a guest that deeply values the friendship today between Israel and Poland. I know how important that friendship is to the security and prosperity of both our countries.

But I am also privileged to serve as an Ambassador of Israel.

I am privileged to represent a Jewish people that is once again a sovereign people.

Sovereignty has given us many things.

It has given us a shield. No longer do the Jewish people beg foreign kings, presidents and prime ministers to defend us. Today, we defend ourselves.

Sovereignty has given us a refuge. No longer do we depend on foreign governments to open their gates to welcome in Jews fleeing persecution. Today, we open our own gates and welcome Jews home to Israel from across the world.

And sovereignty has also given us a voice. No longer do we ask others to plead our case before the sovereign nations of the world. Today, we plead our own case and have a place among those nations.

No power on earth will silence that voice.

And Israel will speak the truth right here in Poland, especially for those who can no longer speak, those whose voices were silenced long ago.

It is precisely because the Jewish people are a sovereign nation that for me this March of the Living has also been a March of Hope.

This week, that Hope has followed us everywhere.

I heard it in the songs of Jewish students in that synagogue in Tykocin.

I read it the words inscribed by Israeli soldiers on a stone monument that stands by those mass graves in the forest nearby.

I saw it in the Israeli flags carried at Treblinka and wrapped around shoulders at Mjdanek.

And I felt that hope all week because I know that the Jewish people do not march here in Poland as a stateless, powerless and downtrodden people.

We march as a sovereign, powerful and proud people.

I expect that sense of hope will feel even stronger tomorrow, as 13,000 of us march in Auschwitz and sing the Hatikva.

As we sing our national anthem of hope, I will remember the six million Jews who were murdered, the 1.5 million Jewish children.

I will feel a defiant pride knowing that the Thousand-year Reich that tried to uproot the tree of our people is no more, and that that tree has been replanted in its ancient soil, where it grows taller and stronger, decade after decade, reaching greater and greater heights in technology and innovation, science and medicine, culture and learning.

And I will feel the hope that comes from knowing that the Jewish people are no longer spectators of history but actors in history.

I will feel the hope that comes from believing that as we act to secure the Jewish future, a part of each of those six million comes alive in us, as their personal stories become part of our national story –

A national story that contains many difficult chapters, but which is a great story of promise and hope, a story of an eternal people whose glorious chapters are still being written.

May their memory be blessed.”