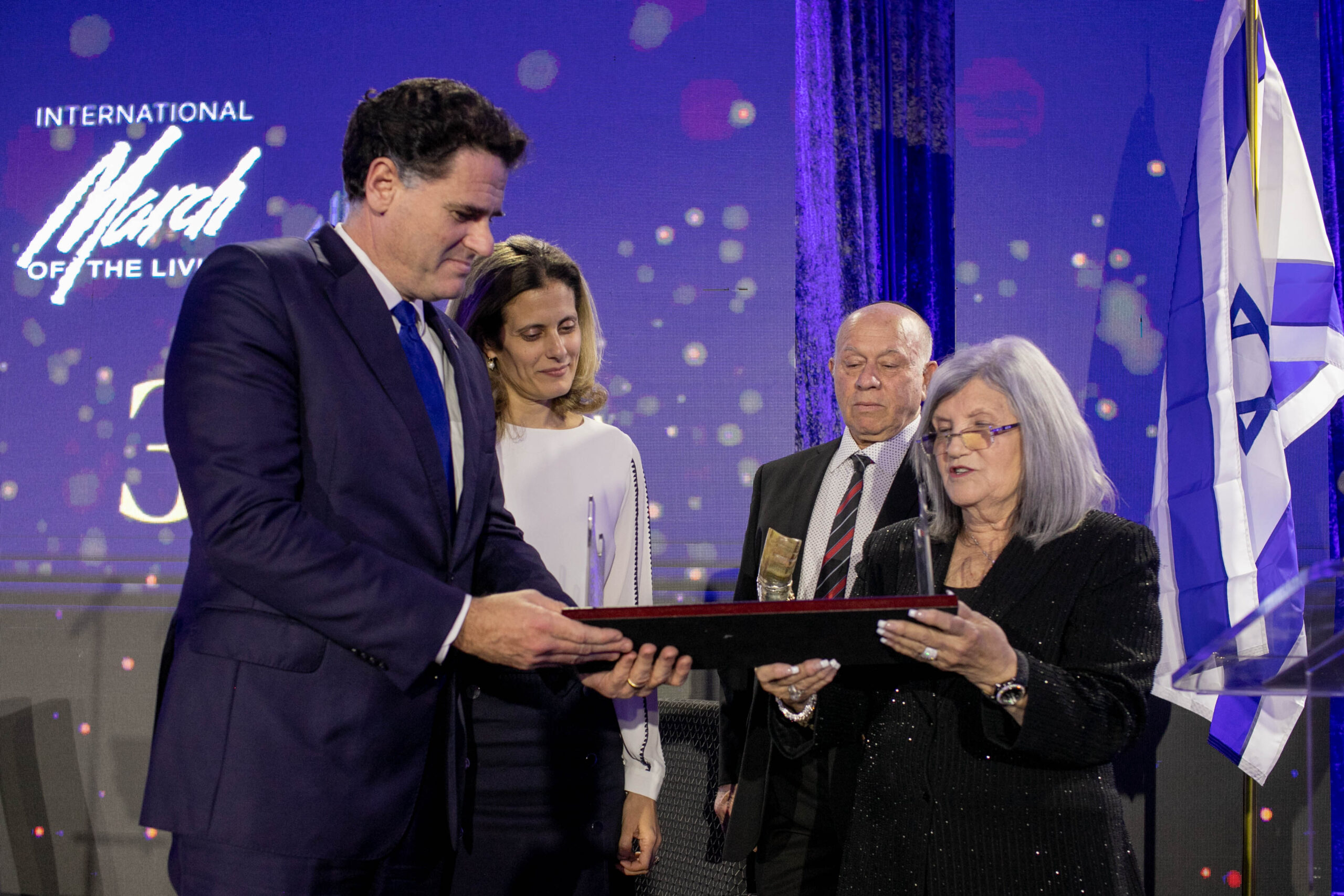 Ambassador Ron and Rhoda Dermer received award from Dr. Shmuel Rosenman, Chairman, and Phyllis Greenberg Heideman, President, of the International March of the Living at 35th Anniversary Gala held in Miami on January 10, 2023.

In first address as minister, Ron Dermer tells gala dinner of Holocaust memorial organization, March of the Living, of the importance of Holocaust education, and stressed the Government’s commitment to standing strong against Iran, while expanding peace in the region.

Minister Dermer: We will do everything in our power to make sure that the regime in Tehran that openly calls and actively works to destroy the one and only Jewish state, does not achieve that goal”.

Miami, Florida, 11 January 2023 – Making his first appearance since being appointed as Israel’s Minister of Strategic Affairs, Ron Dermer addressed a special gala dinner last night (Tuesday) hosted by March of the Living in Miami, Florida, marking the 35th year since its founding.

Speaking at the event, Minister Dermer spoke about the importance of Holocaust remembrance and praised the work of March of the Living in promoting Holocaust education and commemoration around the world.

He added, “It is rooted in a unique hatred, antisemitism, a hatred that is unique in its longevity, in its ubiquity, and its ferocity, and its malleability, because it has moved across time, and space, changes forms all the time, it is a powder keg.”

On the importance of unity and standing firm in the face of antisemitism, Minister Dermer said, “If you’re going to deal with antisemitism, you have to fight back. You have to be willing to stand up against antisemitism. Jews cannot wait in the background and ask others to fight our battles for us. You have to be front and center and to be proud and to stand up to the antisemites. And we have to put all the politics aside. It doesn’t matter Democrat, Republican, left or right, you have to call out antisemitism on your side of the aisle and hold hands with people on the other side of the aisle to fight against that scourge. We’re not going to stop antisemitism, but we will make it smaller and smaller. If we don’t fight it, you will see that what was the red line yesterday will be wiped away, and the red line will keep moving and keep moving and keep moving.”

Speaking of the incoming Government’s priorities and commitment to the security of the State of Israel, Minister Dermer noted that he was honored and dedicated to be working with Prime Minister Netanyahu, “doing everything in our power to make sure that the regime in Tehran that openly calls and actively works to destroy the one and only Jewish state, does not achieve that goal”.

He added “I think the policy towards Iran is a critical part of expanding peace because I think it opens the space for Arab leaders to move into a public alliance with Israel when we face this common enemy together”.

Speaking alongside her husband at the event, Rhoda Dermer reflected on her memories of participating in the March of the Living. She said, “For me, the highlight of the March of the Living was walking through Krakow. You see where the Jews lived, where they prayed and shopped, even  one of the first Jewish schools for girls. This was very moving. March of the Living shows that the Jewish people were not just victims. They were also people who built things, who created things, who lived in these dynamic communities. It is so important that the March showcases this as it brings dignity to the Jews who were killed by the Nazis.”

President of the International March of the Living, Phyllis Greenberg Heideman, said: “It is so very significant and meaningful to us that Minister Dermer made his first appearance with March of the Living. As a leading defender of the Jewish people, his voice is a shining light in the darkness of hatred and antisemitism. We are together sending a message of determination to preserve the memory of the victims of the Holocaust and educate generations to come”.

In a video interview featuring Rabbi Israel Meir Lau, a child survivor of the Holocaust, and former Chief Rabbi of the State of Israel, who has participated in every March of the Living program since its inception, until the outbreak of the Covid 19 Pandemic in 2020.

Former United State Ambassador to Israel David Friedman announced at the gala a bi-partisan delegation to the 2023 March of the Living.

About March of the Living

The International March of the Living is an annual educational program, bringing individuals from around the world to Poland and Israel to study the history of the Holocaust and to examine the roots of prejudice, intolerance and hatred.   The March of the Living was founded in 1988, during a period of rising anti-Semitism and Holocaust denial, by leading Jewish figures In Israel, Europe and North America, including the visionary Miami based Jewish educator Gene Greenzweig (d. 2011). Since its inception, some 300,000 participants from 52 countries have joined the 3-kilometre march from Auschwitz to Birkenau on Holocaust Remembrance Day – Yom Hashoah – as a tribute to all victims of the Holocaust.