My ﬁrst time in Poland; the gentle chaos of defiance 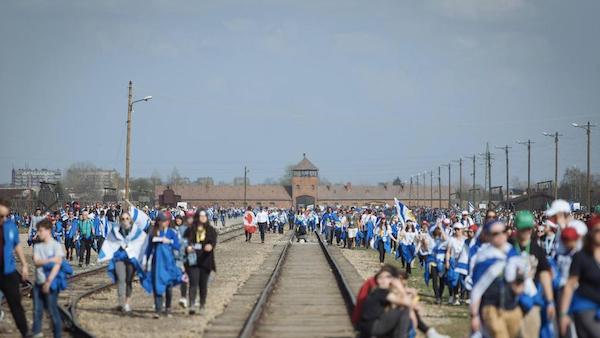 This week I visited Poland for the very first time. I’ve probably avoided this journey because I grew up in a Holocaust-drenched-home and then lived in Holocaust-steeped-Israel. A few years ago, I visited Lithuania where our family comes from and where, in the village which my great-grandfather left, 2,000 Jews were locked into the synagogue and burnt alive.

I am so glad I finally went to Poland. We were beautifully held within the loving, gentle community of March of the Living UK, and guided by knowledgeable, wise, calm educators. The March of the Living is particularly outstanding in its educational approach as it is neither emotionally manipulative nor has a religious or Zionist agenda. I am most deeply grateful that I could weep without embarrassment, free to do so because others held my hand and did not fret.

The March itself was on the last day of our journey and is an ingathering of thousands of Jews and allies from around the world. We filled the paths of Auschwitz.

I was concerned about being squashed amongst what seemed like a vast number of people. Eleven thousand of us marched in defiance of the Nazis and in memorial to our victims.The people there who I knew and loved from the UK and from Israel were too numerous to count. Then the penny dropped. This was the first time I have managed to have a sliver of comprehension of the enormity of the number of victims. Our large group that day was the same as the number of people who were gassed and burnt and exterminated in Auschwitz every two days, when the conveyer belt of hate was functioning fully.

On the March, people swop badges, bandanas and benign March of the Living memorabilia. It’s gentle chaos. Initially this jumble of people, sounds and motion grated on me but then I realised that it is precisely this organised balagan (apparently originally a Polish word) which vindicates this beautiful display of Am Yisrael Chai. I imagined the ghost of the Auschwitz camp commander, Rudolf Höss looking down on us. Not only were we there — thousands of Jews and friends and among us survivors in defiance of the Final Solution. Our reverent irreverence in and of itself representing and celebrating the opposite of the repulsive perverse “order” that the Nazi regime attempted to force on the world. I feel blessed to have gone, and even more blessed to return.