‘Maybe this is a prison:’ Holocaust survivor shares her story and pleads for communication 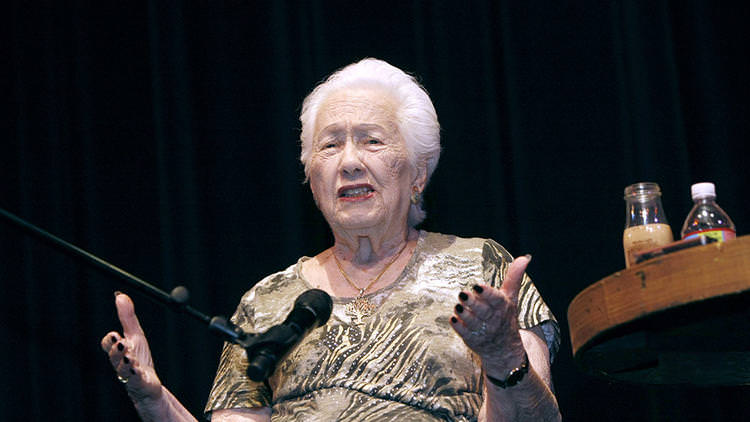 They traveled for hours on the railroad squeezed tightly into cattle cars, thinking they would travel for six or seven hours and arrive in Germany.

When the train finally stopped 3 1/2 days later, Renée Firestone was among the thousands of people who poured out of the cattle cars where Nazi soldiers and their growling dogs were standing outside.

While exiting the train, Firestone lost sight of her parents in the crowd, but clung to her younger sister.

She was 20 years old then, born and raised in Czechoslovakia, where she lived a peaceful life until that point — when she arrived at the Auschwitz-Birkenau concentration camp.

Now 92, Firestone shared her story of survival with students at Glendale Community College on Wednesday.Before they went to the train station, Firestone had been told she and her family would travel to Germany to help the German Army by harvesting food or working in factories.

“I remember, I went to my father and I asked him whether he trusts the Germans and [if] that’s what we’re going to be doing, and my father says, ‘Honey, don’t worry. America and England [are] already occupying more than half of Germany. The war is coming to an end. I guarantee you, in four months, we’re going back home.'”

They were told they could pack a small suitcase. When they arrived at the station, they didn’t find any passenger trains.

“They tell us we should pack in these cattle cars, and now the Jewish people are questioning: You know, we’re going to Germany to help them out. At least they could take us in a regular train. The cattle car I was in, maybe there was 120 of us. There was absolutely no room to sit down.”

Six or seven hours later, around the time they expected to arrive in Germany, the train kept going, and it didn’t stop until the Nazis had rounded up thousands of Jewish people from across Europe.

“We hear, outside, yelling in German. ‘Jews! Jews! Out! Out!’ This is the first time the train stopped at daytime,” Firestone said. “I grabbed my little sister and I said to her, ‘We don’t know where we are. I want you to hold onto me.'”

The men and women were told they would take a refreshing shower before receiving their work assignments.

“What I hear sounds OK, but what I see doesn’t make any sense,” she said. “I’m trying to figure out, what kind of village is this? I see some human skeletons walking around in gray striped pajamas. Those pajamas, they remind me of prisoners’ uniforms. Maybe this is not a village. Maybe this is a prison. But what kind of work am I going to do in prison?”

As she entered the camp, Josef Mengelea, a German Schutzstaffel officer and physician at Auschwitz, directed people one way or another, to work or to be gassed.

Firestone would learn later her mother was among those who were gassed. Meanwhile, she and her sister, along with other women, were directed to take a cold, one-minute shower.

They were puzzled and distraught.

“We came out naked, wet from the shower with these dogs barking and biting and growling at us. We were standing there til about midnight,” she said.

This marked Firestone’s first hours of the 13 months she’d spend in the concentration camp that would ultimately be liberated by the Russians. 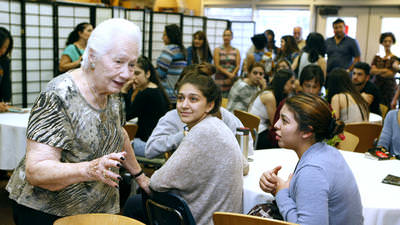 Her sister survived the next six months, but it was decades later when Firestone learned her sister was shot to death after being forced to undergo medical experiments performed on Jewish women and children. She was 16.

In 1948, Firestone moved to Los Angeles with her husband and became a successful fashion designer.

She lives in Beverly Hills today and said she’s determined to speak about the Holocaust for as long as she’s able.

“When I was liberated from the camp, I really thought the world learned a lesson. This was such a horrendous event. Well, how wrong could I be. The world today is in worse shape than it was before the Holocaust. People are still killing each other for no reason,” she said.

Firestone asked those in attendance to teach children to “put their telephones into their pockets and start talking to each other.”