The Lithuanian government, the International Commission for the investigation of Nazi crimes in Lithuania, the Jewish community and the International March of the Living held the annual commemoration ceremony at Vilnius former Jewish ghetto during the Holocaust, followed by a march in Vilnius and to the mass graves in Ponary

״The Shoah destroyed everything without mercy – people, their dreams, their talents, their relationships. We can only dream of how we would be living today, of what Lithuania would have been like if it had not been for the brutal hatred that blinded people so much that the lives of innocent people no longer meant anything”

The main ceremony took place at Rudninku Square, the site of the Jewish ghetto during the Holocaust and was followed by a march led by the Prime Minister in the streets of Vilnius to the station from which the trains left toward the mass grave in Ponary. And from the Ponary train station, the Prime Minister continued to lead the march to the killing pits where 75,000 Jews were shot to their death. 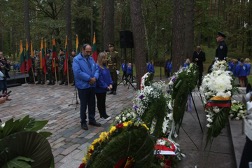 Lithuanian Jewry consisted of approximately 200,000 Jews before the Holocaust, with 70,000 living in the capital city of Vilna, where the main ghetto was built. The Nazis nearly obliterated the Jewish community in Lithuania in the Summer and Autumn of 1941 in what is called “Holocaust by Bullets,” when Nazis shot the Jews of Eastern Europe and buried them in mass graves. 200 Jewish communities were obliterated in Lithuania alone. One of the most prominent symbols of the Holocaust, for Eastern European Jews and in general, is the massacre at Ponar at the outskirts of Vilna, where 70,000 Jews were murdered. One of the most famous Holocaust songs was written as a lullaby to a child whose father was among the victims of the Holocaust.

Holocaust survivor Saadia Bahat was born in Alytus, Lithuania in 1928. After the outbreak of World War II, Saadia’s family moved to Vilna. Following the German invasion of Lithuania in June 1941. In September of that year, the family was put into the Vilna ghetto. During one of the forced deportations from the ghetto, Saadia’s father was murdered. His mother managed to save Saadia and his sister. Saadia later began working in a ghetto workshop, learning carpentry, locksmithy and smithy. In late 1943 he was taken to labor camps in Estonia, where he carried out forced labor felling forests. After the evacuation of the Estonian camps, Saadia was transferred to Stutthof concentration camp and then to the Gotentof camp. The camp was liberated in March 1945 by the Soviet Red Army. In 1946 Saadia immigrated to pre-state Israel, enlisting in the Hagana and Palmach (pre-state army and elite unit). He later studied machine engineering, serving in research and development roles and then as a senior engineer in the Israeli security establishment. In parallel, Saadia continued his artistic endeavors, which he had started before the Holocaust. Dozens of his solo exhibitions, as well as his statues, have been displayed in Israel and internationally. Saadia married Yehudit (Dit) and they have three children, grandchildren and great-grandchildren.

Saadia Bahat at the ceremony: “ We were pushed to the ghetto in 1941. My father was killed just a few weeks before the ghetto was liquidated. I happened to be among other prisoners of the ghetto who were taken by trucks to the railway station. This train had to go to a camp in Estonia, but it started moving towards Ponary. Today, when we are on the train to Ponary, none will weep. I am so thankful that I am standing here in front of you, and nobody wants to kill me“. 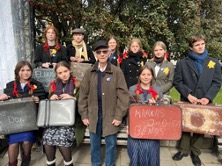 Saadia Bahat and children participated at the main ceremony in Vilnius

Prime Minister Ingrida Šimonytė: “Today, as every year, we gather in the pine forest of Aukštieji Paneriai to remember the greatest tragedy of the 20th century. It is a site where we are inevitably overwhelmed by pain and infinite sorrow as we enter. Paneriai is a painful echo of the name of death. We can only imagine how painful it is for the survivors of the Holocaust, for the relatives of those who were murdered in Paneriai, to come here. We can only dream of how we would be living today, of what Lithuania would have been like if it had not been for the brutal hatred that blinded people so much that the lives of innocent people no longer meant anything. The Shoah destroyed everything without mercy – people, their dreams, their talents, their relationships – and all this under the pretext of conspiracy theories, ridiculous fabrications, and fear of otherness. Not only our state, our nation but also the destinies of our people have fallen to pieces. Almost the entire Jerusalem of Lithuania has been destroyed here.”

Lithuanian MP, chair of the Lithuanian and Israeli inter- parliamentary group, Chair of the International Commission for the investigation of the Nazi crimes in Lithuania and member of the Jewish community, Emanuelis Zingeris said: “Events are being repeated not far from Lithuania in a neighboring state. Babyn Yar and other Holocaust sites are being bombed, devastating, ruining the memory of the Holocaust“.

Ronaldas Račinskas, the executive Director of the International Commission: “Our participation in these processions is our respect for the victims and our understanding that, together with the destroyed Jewish communities, Lithuanian society has lost a unique intellectual, cultural, political, and economic potential; the potential of our Jewish fellow citizens and neighbors, who for centuries together have been building the prosperity of the Lithuanian state”.

Since its inception in 1988, the International March of the Living, has become one of the most prominent organizations in the world involved in Holocaust education and in the fight against antisemitism, hatred and racism. March of the Living holds educational activities throughout the year, marching across Europe where Jews lived and perished during the Holocaust: Poland, Germany, Austria, Hungary, France, Latvia, Lithuania, Greece & Romania. Over 500,000 people, most of them were students, accompanied with Holocaust survivors attend these marches in the past 35 years.