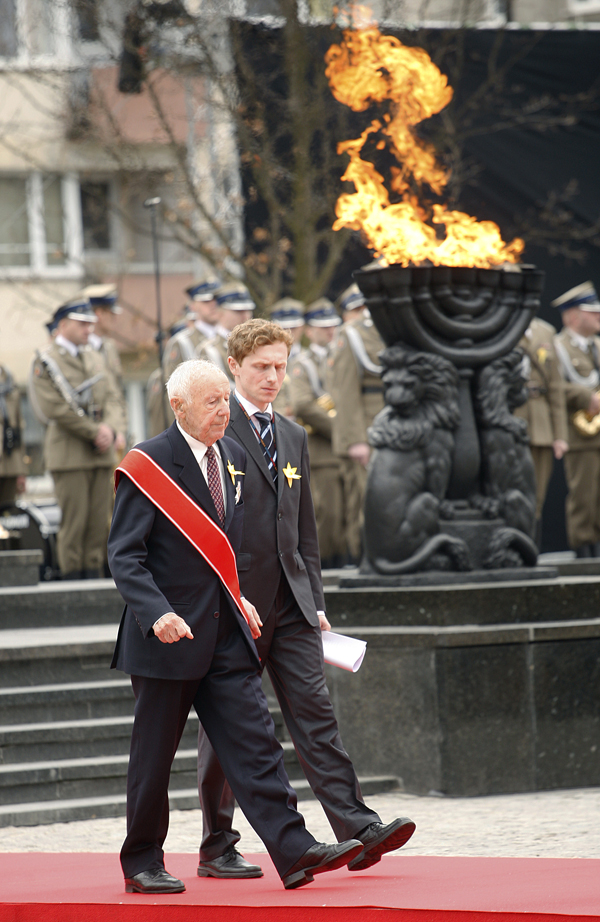 March of the Living mourns the passing of Simcha “Kazik” Rotem, at age 94, the last surviving leader of the Warsaw Ghetto Uprising,

Simcha “Kazik” Rotem, the last surviving leader of the 1943 Warsaw Ghetto Uprising (and a participant in the 1944 Polish Uprising) is escorted to the podium on April 19th, 2013 at the 70th Anniversary of the Ghetto Uprising ceremony, in front of the Rapoport Monument in Warsaw. He was awarded the Grand Cross of the Polonia Restituta by Polish President Bronislaw Komorowski. [Adam Guz Photo]

“From all the tragic experiences of the war and the Holocaust, there is one lesson to be learned: that is there is nothing more valuable than human life. Nobody, in any situation, has the right to take it away. To this day, the world had not drawn conclusions from this horrible crime, which was done in the very heart of Europe in the 20th century. The words ‘war never more’ still don’t mean much, but we have to remember and we have to repeat to ourselves that human life is holy. Perhaps the people will hear. After us our children will come here, and our children’s children, and they will keep repeating, ‘War never more,’ because human life is holy.” Simcha “Kazik” Rotem, April 19, 2013, on the 70th Anniversary of the Warsaw Ghetto Uprising.

His life was a shining beacon of strength, courage and conviction as was his commitment to humanity.

Simcha Rotem’s death represents the end of a generation, but his legacy will forever be remembered by those who cherish freedom and human dignity.

May his memory always be for a blessing.