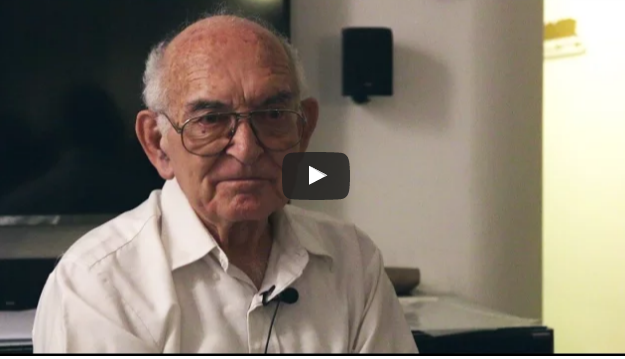 Earlier this week a crowd gathered in a chic apartment up four flights of stairs on Ben Yehuda street in Tel Aviv. The hosts laid drinks and snacks out on a table as the sun set over the Mediterranean behind them.

The crowd of 37 packed into the living room to hear the testimony of Polish Holocaust survivor Jerry Aviram as part of a series of events called Zikaron BaSalon, or “Living Room Memories.” The volunteer-run initiative matches hosts with survivors who share their stories in an intimate home setting.

Most of the organization’s events take place on the eve of Holocaust Remembrance Day, held this year on May 5. The program has grown steadily since it started six years ago. This year, organizers estimated 500,000 people would attend events in 6,000 locations in Israel and abroad.

Aviram, 82, dressed in a crisp white button-down and grey slacks, started his story describing his home town, a small community called Grodna in Poland. He survived the war with his parents in Russia, largely due to a fortuitous personal connection with an officer in the Russian military. Their other relatives did not survive.

Aviram later moved to Chicago, then immigrated to Israel in the 1950s, making his home in Tel Aviv.

Unlike most speakers at Zikaron BaSalon events, Aviram gave his testimony in English. At the beginning, everyone in the audience said who they were and where they came from — Israel, the United States, Costa Rica, Chile, the Czech Republic and elsewhere. There were native Israelis, new and veteran immigrants to Israel, tourists and Aviram’s family.

The rapt audience listened to Aviram speak for almost an hour. After his story he fielded questions on Holocaust education in Israel, anti-Semitism before the war, his reaction to Elie Wiesel’s books and other Holocaust literature and other subjects.

He then joined his family in the audience as the group sang “Flower,” by Yehuda Poliker, and “As if you are here,” by Eran Eliezer, accompanied by an acoustic guitar. Host Natalie Seeff read the short story “The Key Game” by Ida Fink about two parents using a game to train their child to stall for time if the Nazis came for the father. She then read the “The Miracle on Dan Bus #4” — a story of a mother and son meeting by chance after the Holocaust on a Tel Aviv bus, a few blocks from the hosts’ apartment, in 1951. Both thought the other was killed in the war.

At the end of the evening, Seeff presented Aviram with a certificate from Zikaron BaSalon. Everyone in the audience signed the certificate, writing their thanks, their name and where they came from.