Lilly Weds Ludwig in a White Dress After All 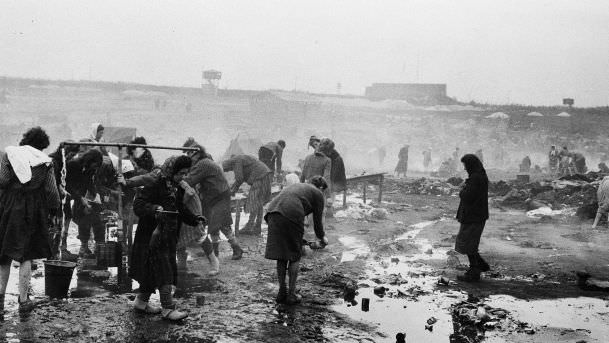 Haaretz – On January 27, 1946, Ludwig Friedman and Lilly Lax were married. They celebrated their nuptials in Celle, a small city in Germany whose distinctions were that it had a synagogue that had survived the depredations of Nazism and the destruction of World War II, and that it was close to Bergen-Belsen displaced persons camp, where the bride and groom were then resident.

Every wedding is an emotional event, to be sure, and one uniting two survivors in the wake of the Holocaust would have been by definition all the more moving, but this ceremony was particularly notable because of the wedding dress worn by Lilly.

Lilly’s dream was to be married in a traditional white dress. But, finding appropriate white material for a dress was not something to be taken for granted at the DP camp, which was established adjacent to the notorious concentration camp in northwest Germany following its liberation. Nonetheless, Ludwig promised to come up with the material.

Both the bride and groom were natives of Czechoslovakia, she from Ceradice, northwest of Prague, and he from Szolos, in what is today Slovakia. Lilly, born in 1924, was one of the six children of Itmac and Miriam Lax. The mother died when Lilly was a child, and Itmac, a rabbi and traveling salesman, was left to raise the children by himself.
As the storm clouds of World War II began to gather, a sister of Lilly’s who had moved to the U.S. offered to provide tickets so that at least part of the family could join her. But that was in 1941, by which time Czechoslovakia was under German occupation, and they were unable to attain visas. The entire family was deported to Auschwitz, and there the father and Lilly’s two brothers, Michael and Eli, were murdered on arrival.

Lilly and her sisters, Eva and Ilona, who survived their work as forced laborers, were transferred to the DP camp with the war’s end.

Bergen-Belsen, in German’s northwest, some 25 kms from Celle, was liberated by British forces on April 15, 1945. The concentration camp was leveled, but an adjacent Germany army camp was converted into a facility for displaced persons.

It was there, in June 1945, while standing in line for food rations that Lilly met Ludwig Friedman, who had been consigned to the camp’s food distribution center after the British had caught him stealing milk.

The two fell in love and decided to marry, and Ludwig took it upon himself to produce fabric for a wedding gown. The answer appeared in the form of a former German pilot who entered the food center looking to trade his old parachute for some rations. They haggled, and the item was sold to Ludwig for a kilo of coffee and several packs of cigarettes.

Lilly hired a fellow survivor, a trained seamstress named Miriam, to turn the six panels of the parachute into a simple gown that tied in the back with a bow. Its collar was rolled and its waist fitted. With the leftover material, Miriam, whose payment was Lilly’s cigarette ration, was able to sew a white shirt for Ludwig.
The wedding took place in the heart of the German winter, and Lilly and Ludwig’s 400 guests had to tramp to Celle through the snow.

The town’s synagogue, built in 1740, had survived Kristallnacht and the war because of its location in a narrow street next to a valued factory. Nonetheless, iIt had sustained some damage, but had been renovated by fellow DPs from the camp.
A Torah scroll was sent from England, and an ark was fashioned out of an old kitchen cabinet.

Lilly Friedman told reporters, when she donated the dress and a number of other items saved from her time at the DP camp to the U.S. Holocaust Memorial Museum, that a number of other Bergen-Belsen brides had also worn the dress, so many in fact that she lost count after number 17.

In 1948, she and Ludwig immigrated to the United States, settling in the Sheepshead Bay section of Brooklyn, near her sisters. Ludwig worked as a carpenter and butcher before opening a small jewelry store in Manhattan. After his death, in 1992, Lilly continued to run the store by herself.