Join a March while survivors can still share their experiences by Rabbi Gideon Sylvester, UK, 2017 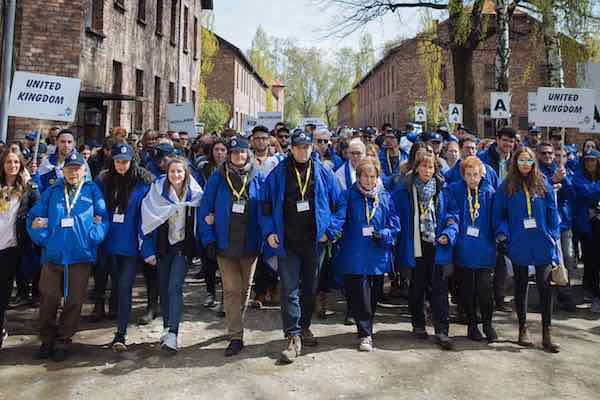 Times of Israel – Imagine that your best friend is having a nightmare. He thrashes about in his sleep; crying and screaming hysterically. Naturally, you would wake him, comfort him and reassure him that everything will be alright. But when the psychiatrist Viktor Frankl faced this predicament, he resisted the temptation to awaken his friend. Instead, he let him sleep on. They were in Auschwitz and however grotesque the nightmare was, reality was undoubtedly worse.

This portrayal of inhumanity that surpasses our worst nightmares encapsulates our inability to comprehend let alone describe the enormity of the Holocaust.

Yet the victims of the Holocaust urged us to tell their tale. In the Warsaw Ghetto, people gathered evidence of their persecution and buried it in milk churns so that their story would be told. In Auschwitz, the Jewish workers buried notes among the ashes testifying to the genocide. Auschwitz survivor Primo Levi writes that while at the moment of liberation, he and his friends would have wanted the camps torn down, bulldozed and destroyed, on reflection he realized the importance of preserving them to educate future generations about the evils of Nazism.

The Holocaust is overwhelming, but we have a sacred obligation to learn from the survivors and recount their stories to the next generation. It’s a duty which has become all the more urgent in the wake of Holocaust deniers who seek to refute the reality of mass murder while feeding the prejudices of those who would repeat it.

For the last three years, I have been part of the faculty of March of the Living UK, leading the United Synagogue bus. Our journey explores the richness of a thousand years of Jewish life in Poland, our troubled relationship with our Polish neighbours and the murderous destruction of the Holocaust.

March of the Living UK‘s deep commitment to examine the facts and wrestle with the complexities of our history is striking. Meeting some of the educators of the 10,000 people from across the world who attended the March, I saw that our British delegation has much to be proud of.

What marks our education programme is its passionate commitment to the highest standards of education. Each year, the seasoned educators who lead our groups gather for a seminar to learn from experts, refresh our knowledge and rekindle our passion; all that to guide a trip that only lasts for six days each year. This outstanding programme of professional development sets a new standard in Jewish educational programming.

The results are evident in the participants who return shocked by the depths of evil, but inspired by a deeper appreciation of their heritage and the need to upgrade their Jewish engagement.

It’s impossible to convey the extent of the evil of the Holocaust, but the British March of the Living team is leading the field. Those who have not yet taken the chance to join one of our journeys would be well advised to do so while the survivors are still alive and strong enough to share their testimonies.