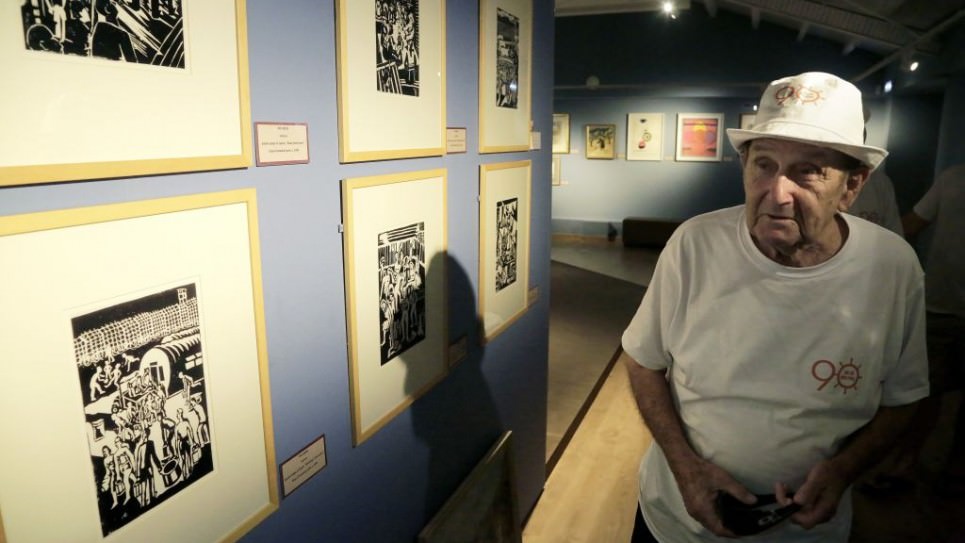 In this Thursday, Sept. 8, 2016 photo, Murray Greenfield, 90, walks around an exhibition about interned Jews at the Center of Visual Arts and Research in capital Nicosia, Cyprus. (AP Photo/Petros Karadjias)

NICOSIA, Cyprus (AP) — Seventy years later, Murray Greenfield can still remember the anger he felt when he was locked up with hundreds of Jewish Holocaust survivors in a British detention camp on the Mediterranean island of Cyprus.

“Your first reaction is you’re mad as hell,” 90-year-old Greenfield told The Associated Press from his home in Israel, recalling the feelings of many stuck behind double rows of barbed wire fences and under armed guard. “Why should we, the survivors, be behind barbed wire?”

Born and raised in New York City to Jewish immigrant parents, Greenfield reminisced about his time in Cyprus during a September visit to the island organized by his family for his 90th birthday.

After a three-year stint in the US Merchant Marines during World War II, Greenfield, a US citizen, was among a crew of volunteers aboard a rickety, decades-old icebreaker that was pressed into service to ferry some 1,500 Jews to Palestine, ruled by Britain.

Tens of thousands of Jews saw no future in postwar Europe and sought to start over again in Palestine, but the British were not about to let them in. Some 250 American sailors had volunteered to help Jews sail to Palestine aboard 10 surplus World War II vessels purchased with secret donations from Jewish Americans, he said.

After picking up passengers from the coasts of Italy and France, Greenfield’s ship — the Hatikva — was spotted as it sailed across the Mediterranean and British naval vessels towed it to Haifa port. Most of the crew and passengers were taken to nearby Cyprus — itself a British colony at the time — and placed in internment camps. 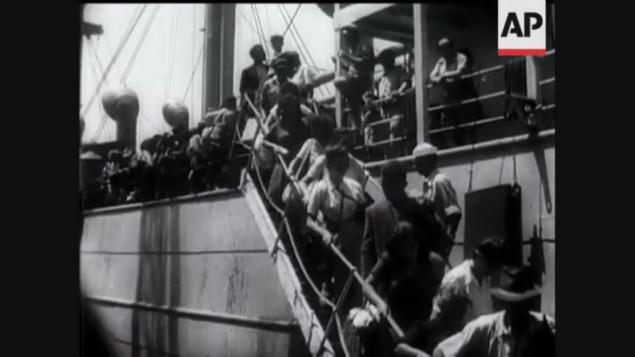 Jewish refugees from British detention camps in Cyprus file down the gangplank at the Haifa port (Screen capture: YouTube)

The detainees’ anger quickly gave way to defiance, said Greenfield. With leadership from the Haganah, a Jewish paramilitary organization in Palestine, detainees transformed the camps into organized communities replete with schools, where languages from all parts of Europe were taught. Greenfield taught English.

“You’ve got this feeling, now we’re going to win, they’re not going to succeed in breaking down our willpower,” said Greenfield. “It was a rebirth.”

He said he always intended to return to New York City, go to college, find a job and get on with his life. But his three months in the camp changed him.

“The people I met were so enthusiastic, so positive,” he said. “They were creating a state, a whole new thing.”

Greenfield’s son Ilan said the family chose a trip to Cyprus to celebrate his father’s life because it was the place where he committed to building a life in Israel. 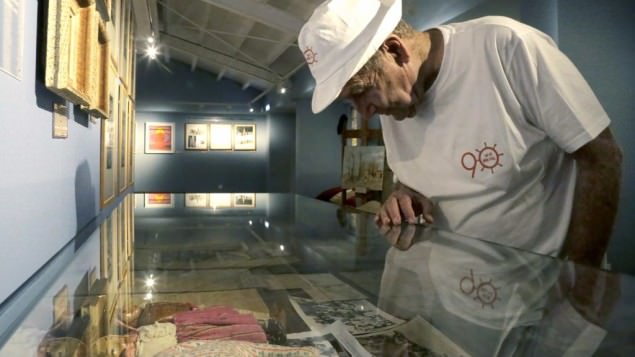 In this Thursday, Sept. 8, 2016 photo, Murray Greenfield, 90, looks around an exhibition about interned Jews at the Center of Visual Arts and Research in capital Nicosia, Cyprus. (AP Photo/Petros Karadjias)

“It was symbolic,” said Ilan Greenfield. “It closes a circle for my father.”

Twenty-four members of his family, including four great-grandchildren, sprung the surprise trip on him at the airport in Tel Aviv, all wearing T-shirts and hats with ’90’ on them.

Nothing is left of the British detention camps like Karaolos near the island’s east coast, but they are not forgotten. In 2014, Cypriot President Nicos Anastasiades inaugurated a memorial built in the village of Xylotymbou, the site of another internment camp.

Greenfield recalled how he helped prepare an explosive that he said sank the British vessel that took him and others to Israel three months after his internment. He said the bombing, ordered by Haganah, came in retaliation for British authorities stopping the ship “Exodus” from taking more than 4,000 Jews to Palestine.

The “Exodus” trip was immortalized in the 1960 film by the same name starring Paul Newman and Eva Marie Saint.

Greenfield said the explosive device, packed in toothpaste tubes, was made with a chemical compound that Greek Cypriots had helped smuggle into the camp.

Less than a decade later, Greek Cypriots would mount their own guerrilla campaign against British rule.