‘It belongs to everyone’: Late POW’s diary donated to Holocaust Museum 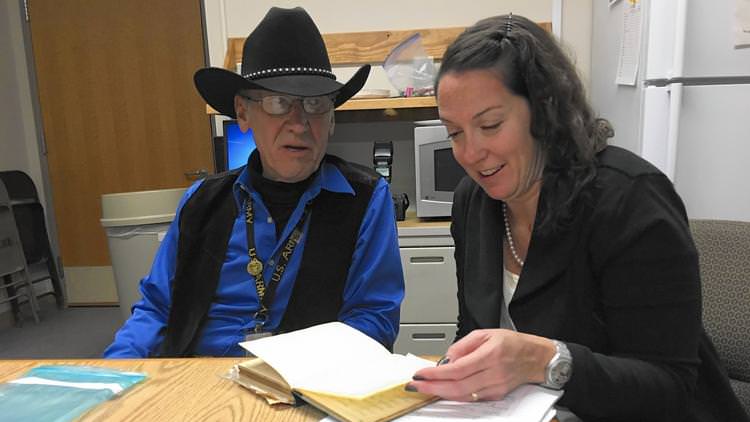 A diary belonging to World War ll veteran Lt. Harry Reuse was found by his family in his footlocker at his McHenry home after he died at age 90 in 2006.

The veteran pilot’s seven children and stepchildren said they had no idea the diary existed, but after reading through it, they decided its content should be shared with future generations.

On Tuesday, Reuse’s son Craig, a volunteer veteran at the Captain James A. Lovell Federal Health Care Center in North Chicago, handed his father’s diary to Arielle Weininger, curator of the Holocaust Museum and Education Center in Skokie, during a modest ceremony at the Lovell Center.

Admitting that there were mixed feelings about giving away the precious family heirloom, Craig said his father had taught him to always do the right thing, even when it wasn’t easy.

“I’m doing this to honor my dad and for the public to have a chance to view this. I think it belongs to everyone,” Craig said.

The diary’s content focuses on the B-17 pilot’s time in captivity.

Reuse was shot down on July 2, 1944, and imprisoned for almost 10 months at Stalag Luft lll, a German prisoner-of-war camp that housed captured servicemen from Allied air forces.

In great detail, Reuse’s diary reveals what his life was like at the camp through written thoughts, drawings and poetry.

A few photos of his sisters and his wife Bernice, whom he met at a church youth group in his hometown Chicago, were inserted between pages.

Veteran Harry Reuse’s diary includes a drawing of a tunnel beneath the German prison camp Stalag Luft lll, where he was imprisoned in 1945. “The Great Escape” was about an attempted prisoner escape using this tunnel. (Yadira Sanchez Olson / Lake County News-Sun)

“We have nothing like that in our collection,” Weininger said.

At times Reuse’s writings reveal he felt hopeful, even thankful.

“‘Thanksgiving’ The day turned out very good — Went to the service in the morning, (since the chaplain is of the church of England, he only gave the prayer, we sang American hymns, and had the Col. and Major give the service.)

“We had a film come to the camp, and our room was lucky to get seats for this night — it was a good U.S. film ‘The Spoilers’ and not too old.

“I have much to be thankful for this year, for all that I have gained in spirit and mind since being here. For the comfort of knowing that the dear ones back home do not have to know what war is like, as these poor people over here, for knowing that Bernice is waiting and that the price of our waiting will make our future life much richer and fuller.”

Other entries describe much more challenging moments, such as going days in the dark and having food rations get thinner and served less often.

Poems written by B-17 pilot Harry Reuse while imprisoned at a German camp during World War ll will be preserved at the Illinois Holocaust Museum and Education Center now that his diary has been added to its collection. (Yadira Sanchez Olson / Lake County News-Sun)

“We ran out of Red Cross food this week so we are now really hungry,” reads one entry.

Craig said the diary confirmed what he’s always known about his father.

“My dad was a quiet man. He didn’t express himself a lot. I was just in awe finding out about what he went through,” Craig said. “I feel very honored to have a father who was a good man.”

On Tuesday, Weininger sat next to Craig, examining the diary’s authenticity.

After reading through its pages, Weininger was surprised to find many intricate drawings of maps of tunnels, the same tunnels that had been used by the more than 70 prisoners who escaped the camp and whose attempt at freedom inspired the film “The Great Escape” starring actor Steve McQueen.

Weininger said she was happy to be taking possession of the diary and thanked Craig for parting with it.

“The majority of our collection deals primarily with items relating to the Jewish experience during World War ll,” Weininger said. “We have very little that deals with American servicemen that were POW’s in German camps.”

Lt. Reuse’s diary, along with newspaper clippings reporting Reuse’s release on April 29, 1945, will be displayed at the museum.

Weininger said the journal will also be used in an upcoming photography exhibit scheduled to open in 2018, which will highlight people and important objects related to the war.