IN COMMEMORATION OF ELIE WIESEL, JEWISH LEADERS GATHER IN HIS HOMETOWN 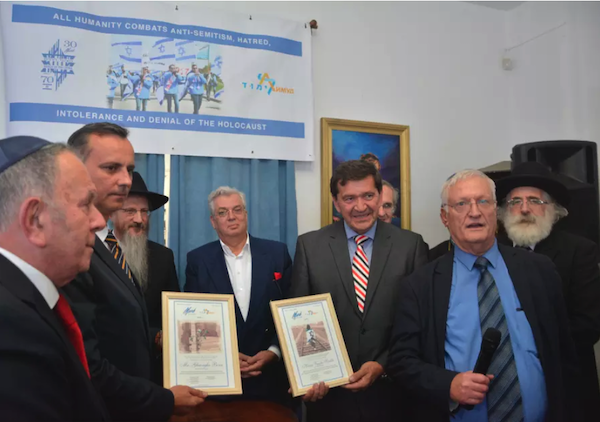 The event included an interfaith dialogue between representatives of Romania’s religious communities and Jewish leaders from Israel.

SIGHET, ROMANIA – Local leaders and Jewish dignitaries from around the world gathered Thursday in Sighet, the birthplace of Jewish luminary Elie Wiesel, to protest rising antisemitism and commend town officials for acting swiftly after an antisemitic incident there shocked the world.

But within twenty-four hours, Wiesel’s house had been scrubbed clean, and only a week later, local police arrested a suspect. According to the town’s mayor, Horia Vassily Scubli, the suspect is a 37-year-old mentally unbalanced man from southern Romania who had traveled over 600 kilometers to carry out the deed. The suspect, he said, is now in custody, in the care of mental health professionals.

Organized by Limmud FSU founder Chaim Chesle and the Deputy Chair of March of the Living Aaron Tamir, the event expressed support for the local Sighet community’s campaign against antisemitism and commemorated the late Wiesel’s 90th birthday. Awards were given by the organizers, the Sighet Jewish community, and the Federation of the Jews of Romania to Mayor Scubli and the local chief of police in recognition of their swift work in arresting the suspected perpetrator.

“We were shocked that antisemitic graffiti was found on Elie Wiesel’s house, and we decided to act,” said Chesler. “The home of Elie Wiesel is a symbol of the destruction of eastern European Jewry,” and the action of the town’s chief of police and the mayor “is a symbol for others of how they should fight antisemitism. Our purpose was to launch a heartfelt call that such events will not be repeated –neither here in Sighet nor in any other place in the world.”

“Students and teachers from Sighet are participating in the event in order to impress on them the importance of the fight against antisemitism,” said Tamir. “From here the call will go out to all of Europe and the whole world.”

According to a 2017 report by the European Union Agency for Fundamental Rights, antisemitic incidents are on the rise in several European countries, though Romania’s Chief Rabbi Rafael Schaeffer said, despite the vandalism on the Wiesel home, that antisemitism remains a minor problem in Romania.

Participants visited Sighet’s synagogue, the last functioning Jewish house of prayer from the dozens that existed before the war, and the adjoining Jewish community center, and the Jewish cemetery, which has been maintained and its graves catalogued by the local community. Pictures and handwritten memorials to Wiesel, Sighet’s most famous citizen, seemed to adorn every wall.

“Wiesel had one word he always used — hope,” said Aviad Hacohen, Dean of the Sha’arei Mishpat Academic College and the chair of the discussion. “Wiesel used to say that the opposite of good is not evil, it is indifference… We are going to fight antisemitism.”

“When we see such graffiti on the house of Elie Wiesel, it is not the graffiti itself that bothers us,” said Chief Rabbi of Russia Berel Lazar, who traces his ancestry back to Sighet and was also a participant in the roundtable. “The real question is: Who told him to be here? Why did he write this graffiti? Hatred leads to murder, murder leads to ruin and in the end, everyone is the loser. Therefore, the most important lesson to be learnt is to strive for peace and amity and to preach understanding and love. I’m sure it’s going to resonate around the world that Sighet has zero tolerance for xenophobia and antisemitism.”

“Antisemitism can be fought by doing good, like the event being held today,” said Rabbi Yohanan Fried, Head of Merkaz Harav Kook and Chief Rabbi of the March of the Living. “If we take the lesson of Wiesel and build bridges, the sun will shine.”

Only 24 Jews live in Sighet today. The town’s historic community, numbering some 12,000, was decimated in the Holocaust — Wiesel was among those deported to Auschwitz in 1944 — and most of the two or three hundred who survived left with the downfall of the Communist Ceauşescu regime in 1989.

In part, this is because Wiesel, a Nobel Peace Prize laureate who was the world’s most visible and vocal Holocaust survivor, made Sighet famous. Wiesel returned to this sleepy town nestled in the Carpathian mountains again and again in his writings, and even in person. His first visit, described in a 1964 article in Commentary magazine, reads like a nightmare that is all the more frightening and disorienting because it is true: Wiesel finds Sighet, and his own childhood home, just as he left them — except for the Jews who had vanished, leaving no trace even on the blank faces of their former non-Jewish neighbors.

“Elie Wiesel always said that there were two cities in the world where he wanted to live for the rest of his life: Jerusalem and Sighet,” aid Joel Rappel, founder of the Eli Wiesel Archives at Boston University and Wiesel’s personal assistant for seven years, who participated in the day’s events. “His dream was to return and to visit Sighet. He said that all of his books flow from the spring that is called Sighet. Sighet accompanied Elie from his first day to his last.”

“If Elie Wiesel was alive today, he would be actively and publicly campaigning against antisemitism,” Rappel added. “I think that the gathering here and the proclamation of the struggle against antisemitism, at the initiative of Limmud FSU and the March of the Living, is a moment of reckoning. The Jewish world needs to understand that we need to enter into a major war, not a quiet one.”

This was the third international event that Chesler has organized in Sighet in Wiesel’s honor. First was the commemoration of the Elie Wiesel Memorial House, a branch of the Marmatiei Museum, in 2014. This was followed by a memorial procession for Wiesel following his death in 2017. Beginning at the museum, over 1,500 participants, comprised of Jews and non-Jews, marched through the streets of the town to the local train station. As part of the ceremony, the station, from which Sighet’s Jews were once deported to Aushwitz, was temporarily renamed after Elie Wiesel.

“We are the city of Elie Wiesel, and it’s necessary to keep his memory alive,” Mayor Scubli said at the ceremony.

MK Yair Lapid and other Israeli public figures, as well as representatives of Limmud FSU, the March of the Living, the Conference for Material Claims against Germany, representatives from the Romanian government, and hundreds of local citizens participated in the 2016 procession.