Alumni Reflection: Julia Ellis “I Traveled All The Way To Poland To March For Those Who No Longer Can—And It Changed My Life Forever”, 2016 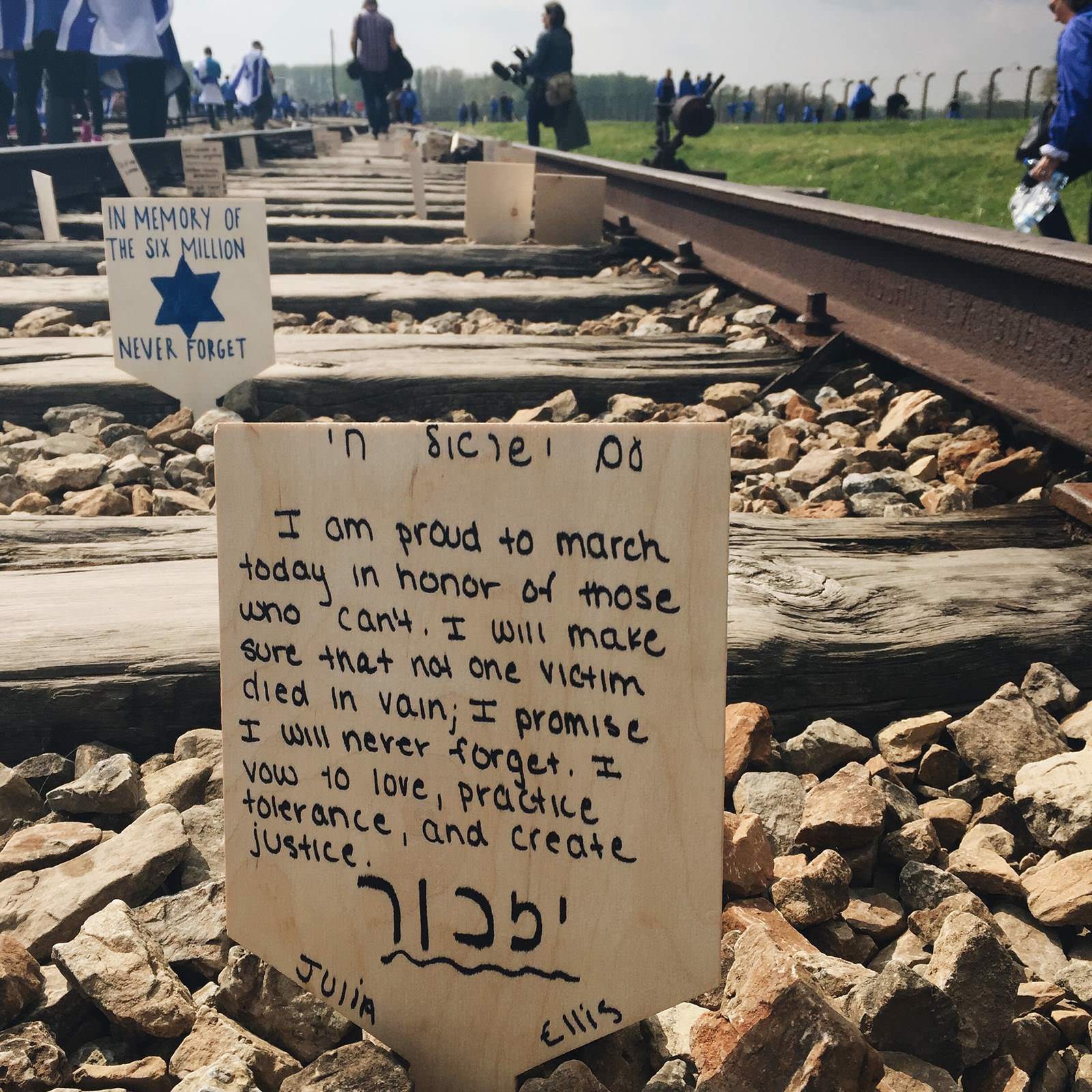 I went on March of the Living to make sure that not one victim of the Holocaust died in vain; I promise I will never forget.

I don’t even know how to begin talking about this trip, but I’m going to try my best to do it justice.

In May of my senior year, I was fortunate enough to embark on a trip that would ultimately change my life forever. I went on the March of the Living, which starts with a week in Poland and then concludes with a week in Israel. The trip is designed to bring Jewish people from all over the world together to commemorate the Holocaust and all of the lives that were lost.

After landing in Poland, it was clear that there was an obvious disconnect between the country and the March’s participants. Poland was much more urban than I could have ever expected, having a skyline extremely similar to those of New York City or Chicago, definitely serving as a distraction from the atrocities that took place only about 70 years ago. After visiting several ghettos and exhibitions, the day finally arrived for the first march from Auschwitz to Birkenau. I don’t think there is a word in the dictionary to describe all of the emotions that I felt that day. It started off as a sunny afternoon, with thousands of proud Jewish adults and teenagers meeting and greeting each other in the passageway of Auschwitz. It almost felt like we were all just in a different world for those moments, where people were exchanging names and where they would be attending college in the coming fall.

After the march commenced, the tone immediately turned from excitement to seriousness, while every delegation held up their city of origin, and every person clenched tightly to their personalized plaques with words that would soon be planted in the train tracks of Birkenau. The then sunny, warm day, soon turned into a gloomy haze, filled with colors of black and gray. Once the march entered the gates of Birkenau, it felt like the gates of hell unlatched for each and every one of us to feel what it would have been like if we were just there 70 years prior; it felt like a light was switched off. The sky grew dark, and all of a sudden among the crowd of thousands, I felt helpless and alone. The thoughts that were flooding through my mind overwhelmed me, as I soon realized that I was standing where thousands last stood before their lives ended. The droplets that were leaking from the clouds quickly turned into pouring rain, and no one could discern whether one was covered in rain or tears; the stains became indistinguishable.

Once I found a place for my plaque, I buried it in the ground and read my words one last time: “I am proud to march today in honor of those who can’t. I will make sure that not one victim died in vain; I promise I will never forget. I vow to love, practice tolerance, and create justice.”

I couldn’t wrap my head around the fact that the Jewish people, my people, were killed for being Jewish, while I proudly waved my Israeli flag that day. Everywhere I looked, there were people sobbing, hugging, and most importantly, comforting. I wasn’t alone in my distraught feelings of horror. I was disappointed in myself, however, for not being able to cry. I was so overwhelmed, so sad, yet no evidence would disclose from my eyes. I reminded myself that the point of this trip is to grasp that what had happened was inhumane, that we never fail to remember the Jewish blood that was spilled, and that we learn to never let something like the Holocaust ever happen again. The march will never be something that deviates from my memory. That day everything was put into perspective. I felt like I had finally taken part in something that brought meaning and value to my life.

I finally cried when I walked into a gas chamber a few days later, after finding scratches on the wall and engraved messages that were written among loved ones before they met death just moments later. I remember walking and looking at the walls, the walls that had green smudges and stains from the toxic gas that was emitted into the lungs of innocent people. It became real to me that these walls heard their very last cries. These walls saw the paralyzed faces of those that were stripping themselves, preparing for their last moments alive. These walls and these rooms were proof that there was no light in this story. There was no coming out of this bleak tunnel. These walls watched and stood idly by while these people’s lives were coming to an abrupt end.

After our time spent in Poland, it was appropriate to travel to Israel, just in time for Independence Day. This is when the second march took place. The shift in mood from the first march to the second was unparalleled. The love and happiness that was radiated throughout the whole day only served as a reminder to appreciate the beautiful land that we get to call home. From dancing and cheering to singing and smiling, the walk with the same thousands of people to the Western Wall was an experience I can only hope to share with my children some day. The hues of white and blue encompassed the entire old city, while The March of the Living took over the streets and sidewalks that led us to the end of our journey. After finally making it to the Kotel, we all found ourselves parading and creating happy tears, just thinking about how lucky we are to all be there for such a remarkable purpose.

The March of the Living was a trip of a lifetime, one that will surpass any vacation or voyage that you will ever find yourself on. I am so grateful to have had the opportunity to see what hate can produce, and most importantly to see what love can create. I promise to never forget the horrific inhumanity that was endemic only 70 years ago, and I promise to do all that I can to make sure that it will never happen again.