Hundreds march in memory of Elie Wiesel in his Romanian hometown 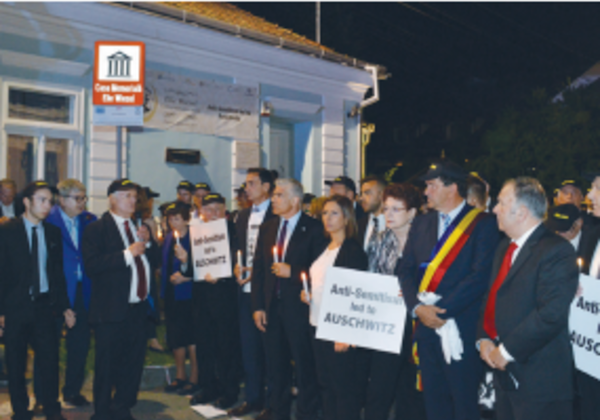 “This was the will of Elie Wiesel and we had to see it through,” FSU Limmud Founder said about the Holocaust honor march.

Jerusalem Post – Holocaust survivor and Nobel Laureate Elie Wiesel did not live to see his countrymen march in honor of the memory of the 14,000 Jews deported from his hometown of Sighet, Romania, in May 1944.

But on Sunday evening, some 1,500 people marched along the same route down which those victims were forced. They started at the Wiesel family home, marched through the town, past its Holocaust memorial and ended at the railway station, where a ceremony was held and a plaque was unveiled, renaming the station after Wiesel.

The participants, comprised of both Jews and non-Jews, held small electricic lamps and wore caps with “Never again” printed on them. They wore white T-shirts with a picture of Wiesel on the front and the slogan of the march, “Antisemitism led to Auschwitz,” on the back, which served as an alarm over the recent increase in antisemitic incidents in Europe and the US.

March through #EliWiesel‘s hometown #Sighet to honor his memory and #Holocaust victims marched through the town, many to their death. pic.twitter.com/j6yOTkgR2e

Wiesel’s family was among those who were marched to the train station and sent to Auschwitz, where most of the deportees were gassed on arrival.

It was important to Wiesel that the people of his birthplace recognize what happened to the town’s entire Jewish population before the eyes of their fellow residents, FSU Limmud Founder Chaim Chesler told The Jerusalem Post on Sunday. Two years ago, Wiesel began discussing plans with Limmud FSU, March of the Living and the Claims Conference to hold an event on the anniversary of the deportation. After Wiesel’s death in July 2016, Chesler was determined that the event would go ahead as planned to honor Wiesel’s memory by realizing his vision.

“This was the will of Elie Wiesel and we had to see it through,” Chesler said.

The event was held in collaboration with the Jewish community of Romania and the World Zionist Organization. It was attended by dignitaries from Romania, Israel, Europe and the United States as well as local residents and 80 students who traveled to the event from Budapest. Many of the VIP guests were friends of Wiesel and shared personal stories about him during a weekend spent in the city of Oradea ahead of Sunday’s march.

The march itself was held in collaboration with the Sighet municipality. Mayor Horia Vasile Scubli told the Post that he expected the march to become an annual event.

“We are the city of Elie Wiesel, and it’s necessary to keep his memory alive,” he said.

“We’re here to learn from the lessons Elie implored us never to forget… and the hope he exhibited,” said Limmud FSU chair Matthew Bronfman during a press conference held at the Sighet City Hall ahead of the march.

“One of the things he demonstrated better than anyone else was his ability to talk to power in a way that was based on morality, ethics and humanity and to call them out when they deserved to be called out,” he added.

Bronfman was referencing Wiesel’s famous lecture to late US president Ronald Reagan about the latter’s plans to visit a visit to a German cemetery where Nazi war dead were buried.

“He was a hero who never shouted,” Bronfman said, saying that Wiesel instead “quietly and persuasively” taught others how they should treat each other.

“I often asked him for advice. His advice was to read, learn, question and only then to act. That is a lesson that I take with me every day.”

Yesh Atid leader MK Yair Lapid was among the dignitaries who traveled to the event from Israel, and whose presence, according to Chesler, Wiesel had specifically requested. Lapid’s late father, Tommy Lapid, was a Holocaust survivor and a close friend of Wiesel.

“We have come here to honor Elie Wiesel, z”l [may his memory be a blessing], a dear man whose private memory has become the collective memory of an entire nation,” Lapid said. “We are here to honor him for his contribution to the memory of the Holocaust and the fight against antisemitism and for his activity for the State of Israel.”

“Antisemitism hasn’t disappeared,” Lapid said. “It exists in Gaza, the West Bank, Lebanon, Tehran and has recently begun to flourish in Europe and the US… as in the 1940s, antisemites understand only strength. The difference is that today we have strength – military strength, moral strength, the strength to say ‘never again.’”

Delivering a long speech at the last stop of the march, the train station, Gamliel said: “73 years ago, at this very location Elie Wiesel and his family along with his fellow Jews of Sighet were stuffed onto the cattle cars to Auschwitz. And from this very place, I pledge, on behalf of the Government of Israel, and the People of Israel: We will never forget. We will always remember… This is our ‘never again.’”

“When I was born and when I was a student I could not speak freely and effectively about what was happening during the Holocaust,” she said. “Maybe only disparate, distorted testimonies about what actually took place have reached our ears. But today, Romania of my generation has the chance to contribute to the political decision to re-open this chapter of the Holocaust in Romania, to assume politically and to continue on a path of a memory recovery, recognition and revival of history, education, and to make such episodes never repeat.”

The writer was a guest of Limmud FSU.