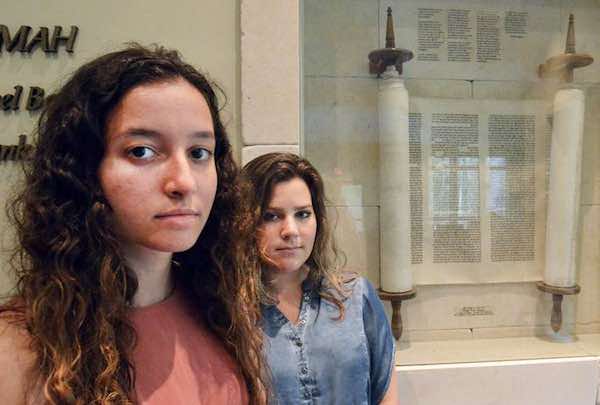 Hair made the unthinkable hit home.

Ariel Shatz, 17, touches her long curls as she describes the feeling.

It came last month, in a Nazi concentration camp in Poland.

By now she’s back home, starting the summer before her senior year at Hilton Head Island High School.

But Ariel and Alex Wynne and Elaina Urato are still sorting through a life-changing experience called the March of the Living. The island teens — and some 14,000 kids from around the world — marched in silence from the Auschwitz to the Birkenau concentration camps of the Holocaust.

In one of the exhibits there, they saw a room full of hair cut from the heads of Jewish victims some 75 years ago.

“They took their hair and made textiles out of it,” Ariel said. “That’s really, really hard. It’s part of you. That’s such a big identity thing to me. It’s a loss of your identity.”

They also saw a room full of shoes. Maybe 40,000 pairs of shoes, all gray and dusty now.

“There were baby shoes and high heels,” said Alex, who just graduated from Hilton Head Preparatory School and is looking forward to the College of Charleston. “It’s symbolic that it didn’t matter who you were before.”

They remarked that 40,000 pairs of shoes represent only a small fraction of the 6 million people murdered in the concentration camps of Adolf Hitler’s Nazi Party until Allies put a stop to it with the bloodbath of World War II.

The girls were amazed at the inhumanity

They were amazed at how small the campus was where the two concentration camps are, and how peaceful and even pretty it looks today.

“It’s hard to imagine it,” Ariel said. “There would have been no grass, because they ate the grass.”

They imagined it by walking on the railroad tracks used to load Jews in like cattle.

They saw where one victim carved a Star of David on the wall in the gas chambers they called “the showers.”

And they saw a 91-year-old Holocaust survivor skipping through the Birkenau concentration camp.

Hank Brodt of High Point, N.C., was on his 10th March of the Living trip. He was 19 when he was liberated by the U.S. Army 80th Infantry Division. He survived five concentration camps. His family did not. A soldier arranged for him to come to America. Twenty-two years later, he was convinced to start telling his story for the first time. Now he tells it constantly.

“He showed us that, if he could get through it when he was our age, we can do it, and we can celebrate that we can leave that place and we can do what we want to do,” Alex said.

The girls now feel the burden of that dwindling group of survivors.

Brodt doesn’t want anyone to forget the Holocaust, because he doesn’t want it to happen again. He says he speaks out on behalf of all those who did not survive it.

That’s the point of the march. Now there have been 29 of them with 261,000 participants from all over the world.

That mass of humanity with different languages and styles was a major part of the experience for the three girls who live in the tiny Jewish minority on Hilton Head.

“Being there is so different,” Ariel said. “You’ve seen pictures, but there, you can feel it. It’s very heavy.”

But the trip did not end at the concentration camps. It always ends with a second march, this one in Israel.

“It’s kind of like a modern-day Exodus,” said Rabbi Brad Bloom, of the girls’ home temple, Congregation Beth Yam. “They go from Pharaoh and Hitler to the independence and joy and achievement of Israel as a world-class, free state. Personalizing history is a critical component to remembering it.”

The island girls remember flying overnight from a cold climate to a warm place. And it was Israel’s Memorial Day, when sirens sounded and everything stopped. The saw everyone taking it very personally, because everyone — at about their age — goes into service for their country, including military service.

They were there for the excitement of Independence Day. They saw forests rising from the desert. And they marched again, this time with laughter and joy, around the wall of the old Jerusalem, to the Western Wall.

“To go out of the worst time to the complete rebirth of a people, to the Promised Land, was really moving,” Alex said. “It is a very triumphant feeling.”