Holocaust survivors who witnessed “Kristallnacht”: The world has not learned the lesson 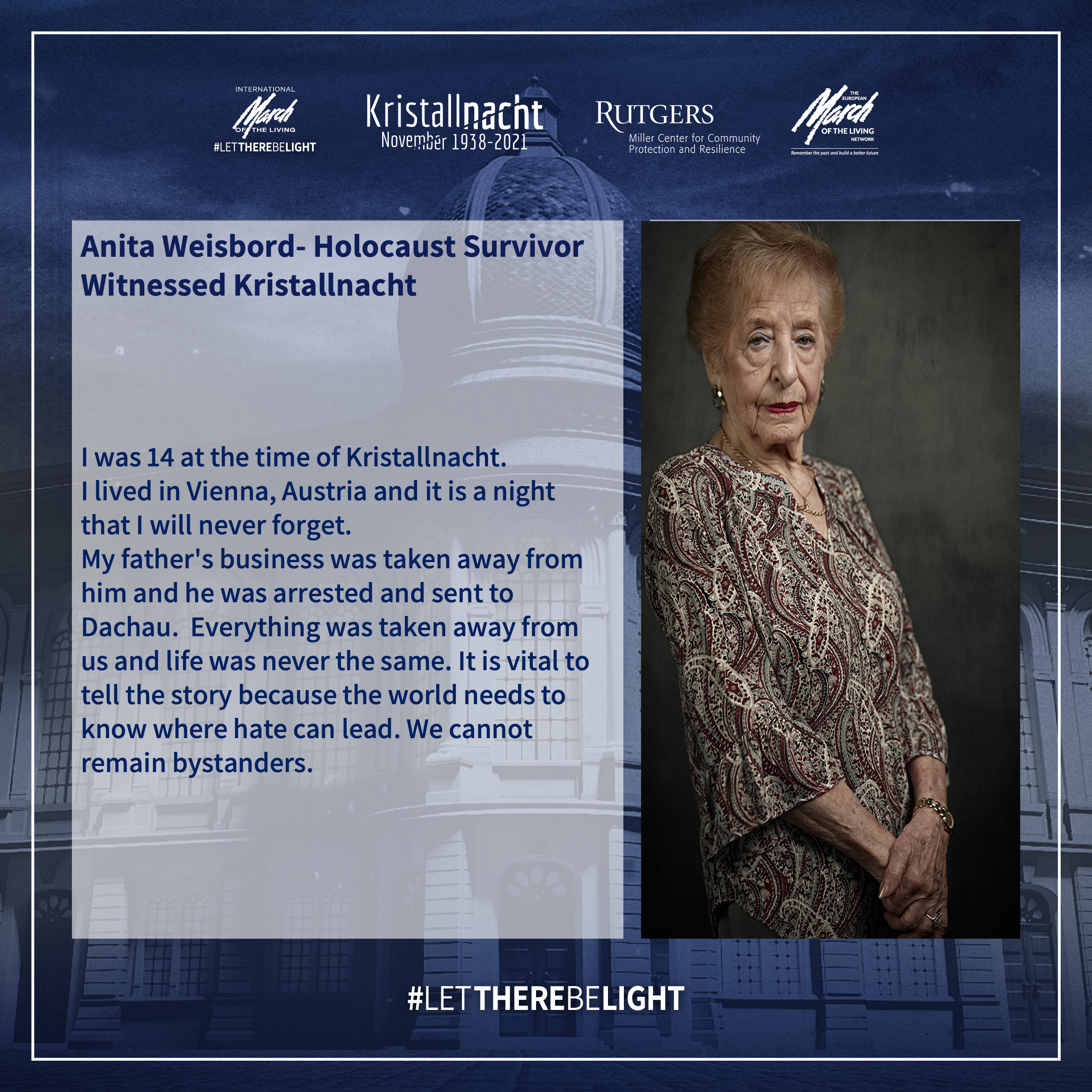 Ahead of the commemoration of November pogroms also known as “Kristallnacht”, (9 November, 1938,) Holocaust survivors who as children witnessed the pogroms, are taking part in a global commemoration initiative led by the International March of the Living global, “Let There Be Light”, bravely reflecting on the dreadful memories of that night, in order to help educate the next generation and stand up against hatred.

Walter Sommers (Indiana)
Now 100 years old, Walter Sommers lives in Indiana, US, but was born in Frankfurt, Germany, on December 29, 1920. Walter went to a German public school, and when the Nazi’s came to power, Walter continued to attend his school, but his daily reality changed.  All the teachers had to join the Nazi union and wear the swastika on their lapels.  When any teacher entered the classroom the students rose and gave the Nazi salute. As Hitler rose in power, there were more and more laws against Jews, limiting their freedoms.

Walter was living in Munich at the time of the “night of broken glass”, the Kristallnacht pogrom. This was the first violent pogrom against the Jews by the Nazis in Germany and Austria.  Synagogues were torched, shop windows were smashed, and 30,000 Jewish men were rounded up and taken to Dachau and Buchenwald. The Sommers’ family stores were smashed and looted. Walter’s father was arrested and taken to Buchenwald.  After speaking with his mother, Walter went home to Frankfurt to help clean up, and support his family during this dangerous time.  The Jewish people were forced to pay the insurance companies back for the damage to their businesses.

Senta Gruenberg Graff lives today in Los Angeles. She was born in May 1924, in a small town in Germany called Rheine.  She grew up in a traditional home where her family observed the laws of Kosher and Shabbat. Prior to Kristallnacht and the rise of Hitler, her family lived peacefully in Rheine, in friendship alongside the non-Jewish residents of this small community.

At the age of 14, with the rise of the Nazis to power, she experienced what she describes as “the nightmare of Kristallnacht“, which forever changed the course of her life. It is hard for Senta to explain and describe the emotions that she felt watching her synagogue burn down.  She remembers that her father desperately wanted to save the Torah scrolls.

As it felt unsafe to remain in town after Kristallnacht, Senta’s family went into hiding. Upon returning to Rheine, her parents tried to find ways to get out of Germany.  In 1940 her father was able to secure her transport, along with another 130 people, to Sweden.  She left Rheine with two suitcases and 10 German Mark and never saw her parents again. They were sent to Riga where they were murdered. Senta remained in Sweden until 1945.  With the help of the Red Cross, she was able to find out that her brother had survived the War after being sent to Holland in 1936.

Senta firmly believe that the worst thing that can be allowed to happen is that these times would be forgotten.  She implores everyone to never forget. 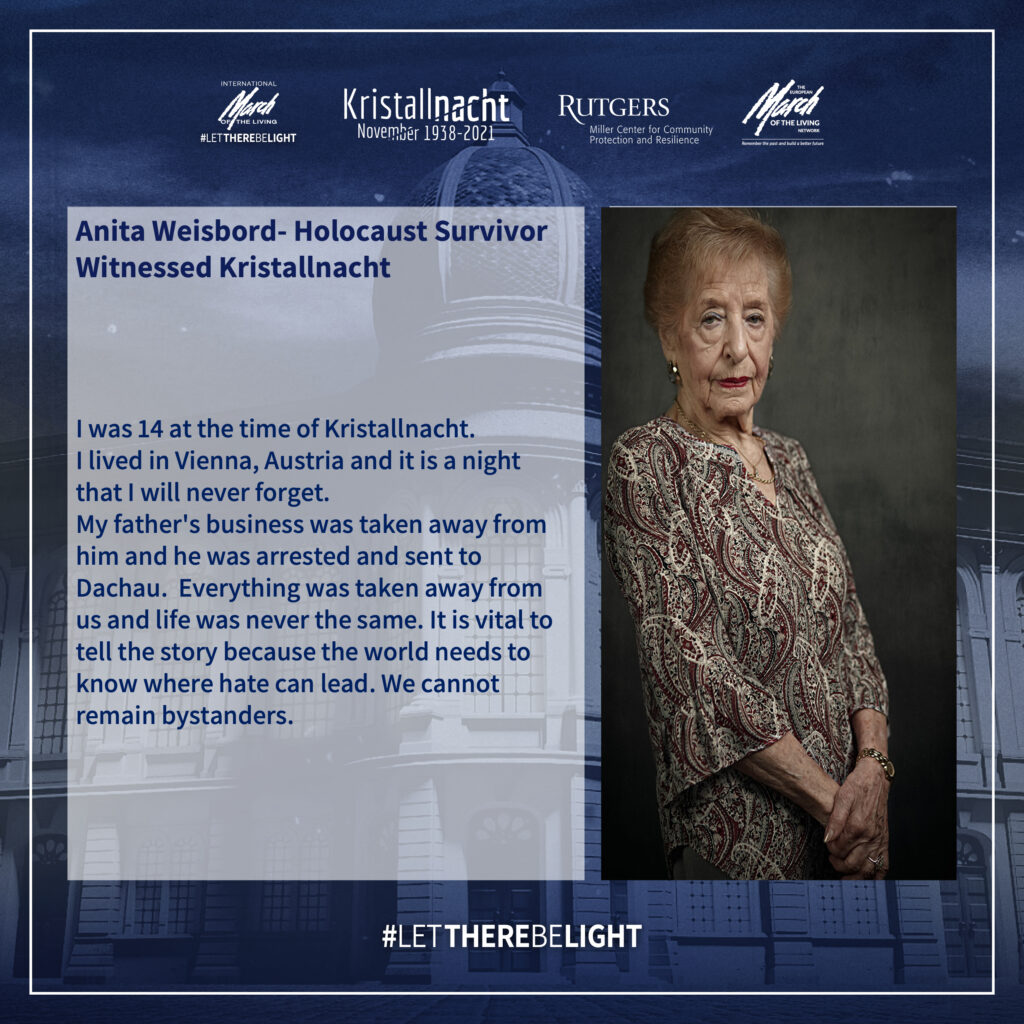 Anita Weisbord was 14 at the time of Kristallnacht. She lived in Vienna, Austria, and it is a night that she explains she will never forget.  Her father’s business was taken away from him and he was arrested and sent to Dachau.  Anita recalls that everything was taken away from them and life was never the same.

Anita’s mother realized that things were no longer safe for them in Austria and with much difficulty, she sent Anita on the Kindertransport to England.  Anita recalls this moment, as if she had been born twice:  the day of her actual birth and the day her mother sent her on the Kindertransport to England.  This memory is always with her.  Anita says that she can never forget the events of Kristallnacht.

Anita noted that she does not think the world has learned the lessons of Kristallnacht, and she is keen to tell her story in the Holocaust.   “It is vital to tell our story because the world needs to know where hate can lead. We cannot remain bystanders,” she said.

Senta firmly believe that the worst thing that can be allowed to happen is that these times would be forgotten.  She  implores everyone to never forget.